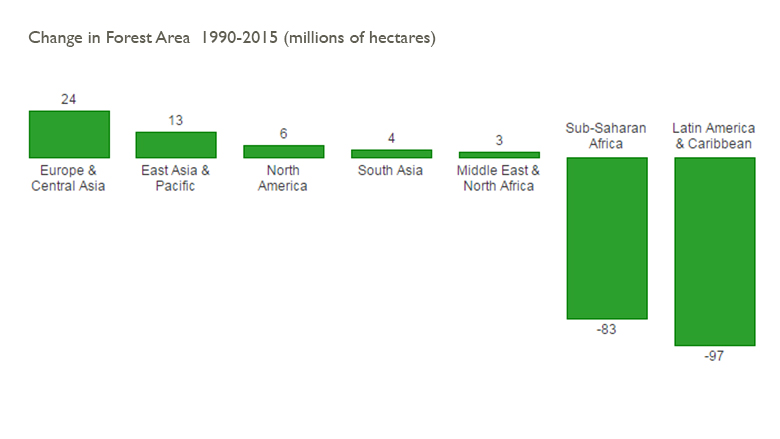 The loss of forest area in two regions over the past 25 years has been barely offset by gains elsewhere.

The Sustainable Development Goals (SDGs) adopted in 2015 articulate a new global development agenda to eradicate poverty and shift the world onto a sustainable development path by 2030. The 17 SDGs and their 169 targets are designed as a web of inter-relationships and dependencies, where progress towards one goal can enhance progress on others. A solid framework of indicators and statistical data will be key to inform policymaking, monitor progress and ensure accountability.

This year’s The Little Green Data Book provides 50 indicators for 200 countries. Several of these indicators have the potential to measure progress on the SDGs as well as highlight important trends in the environment more broadly. The indicators are part of the larger World Development Indicators set compiled annually by the World Bank from many different data sources.

While only one of the Millennium Development Goals (MDGs) was explicitly about the environment (MDG7), the SDGs put environmental concerns on par with economic and social concerns. The environment cuts across all the SDGs and is directly reflected in at least seven goals. There is growing recognition that economic growth, poverty eradication and the state of the environment are intertwined.

Along with these goals and targets, a global monitoring framework with more than 200 indicators is being developed by the UN member states. There are several indicators in the Little Green Data Book that can serve as a baseline for the ones being set up for the SDGs. These indicators measure the use of resources and the way human activities affect both the natural and the built environment. They include measures of natural resources such as forests, water and cultivable land. They also measure degradation such as pollution, deforestation, loss of habitat, and loss of biodiversity.

Growing populations and expanding economies have placed greater demands on land, water, forests, minerals, and energy resources. Efforts to reduce poverty and promote sustainable economic growth are undermined by the degradation of soils, the increasing scarcity of freshwater, the overexploitation of coastal ecosystems and fisheries, the loss of forest cover, long-term changes in the Earth’s climate, and the loss of biological diversity. People in extreme poverty— the roughly 700 million living on less than $1.90 a day in purchasing power parity terms in 2015— are disproportionately affected by these  changes. Here are some trends highlighted in this year’s edition.

Forests cover 30 percent of the Earth's land but around 13 million hectares vanish each year.

Forests cover 30 percent of the Earth's land but around 13 million hectares vanish each year, despite efforts to protect them. Between 1990 and 2015 the world lost more than 129 million hectares—over 3 percent of its forest area. Despite efforts to protect forests, natural habitats and biodiversity, the impact of human activity on the environment continues to affect the world’s poorest communities and deforestation, desertification and the loss of biodiversity all pose major challenges

The world now farms more fish than it catches.

Fish is the main animal protein for more than 1 billion people. Average worldwide fish consumption is about 20 kilograms per person per year. Marine resources are essential to the food security of much of the world’s population and Sustainable Development Goal 14 looks to conserve and sustainably use the oceans, seas and marine resources. Capture fisheries have dominated the seafood market until recently. Since the 1980s there has been a rise in aquaculture (fish, shellfish and seaweed farming), which now accounts for more than half of all seafood production.

A third of all energy is used to produce food but a third of food is lost or wasted.

Saving a quarter of the food wasted around the world would be enough to feed 870 million people. “Doing more and better with less” means meeting the basic needs of people and promoting a better quality of life while also cutting harmful waste and pollution.   Using natural resources more efficiently is also a way to improve. Sustainable Development Goal 12 seeks to ensure sustainable consumption and production patterns.

Natural Capital Accounting as a way to monitor SDGs

Natural Capital Accounting, which expands the scope of traditional reporting, can meet needs of countries that will be reporting against the UN-agreed SDG indicator framework.  It is based on a statistical standards such as the System of Environmental Economic Accounting (SEEA) that can help ensure internationally comparable, high quality indicators that can be integrated into mainstream information systems. The SEEA measures the many facets of the environment and economy in a coherent and integrated way. The role of NCA in delivering the SDGs is recognized in the SDG targets. SDG target 15.9 calls for ecosystem and biodiversity values to be integrated into national and local planning, development process, poverty reduction strategies and accounts.

WAVES, a World Bank-led global partnership, is working with eight countries on accounting for water, land, forests and minerals. For example, water accounts are used as a management tool in many countries to inform a range of policies. In South Africa, for example, they inform climate change policies; in Colombia they are used for water allocation across competing uses; and in the Philippines they inform water pricing.