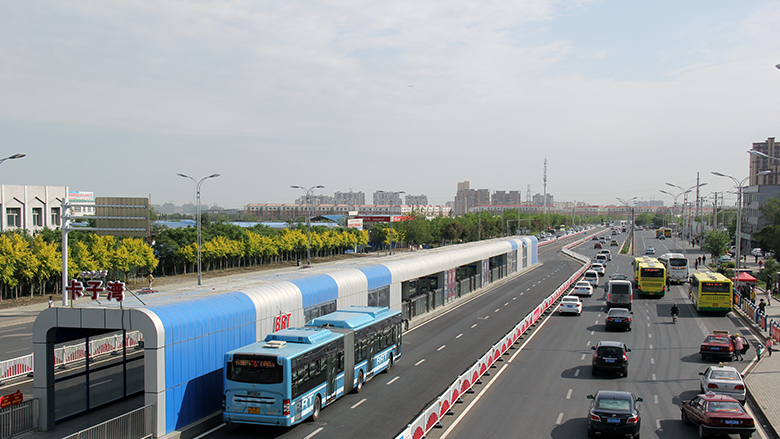 Urumqi, China, May 24, 2016 – The World Bank and Urumqi Municipal Government officially launched the Urumqi Urban Transport Project II. Once completed, the US$514 million project will bring to the city three new bus rapid transit (BRT) lines totaling 52 km and mark the completion of the city’s development of a seven-line, 128 km BRT system envisioned in its 2010-2020 Comprehensive Transport System Plan. The first four BRT lines are operational. The new BRT lines, along with the new transport information management system and new public transport facilities included in the overall project, will improve accessibility to public transport and mobility in Urumqi, a pilot city of China’s Transit Metropolis initiative and Smart City program.

The project, financed by a US$140 million IBRD loan, a RMB 1.4 billion yuan (US$217 million) China Development Bank loan, and RMB 1.0 billion yuan (US$157 million) financing from the Government, is the first transport project that the World Bank co-financed with a domestic bank in China.

“There are at least three very important aspects to the project, the first is fostering urbanization in a sustainable manner, particularly in sustainable transport, each and every element of this project is contributing to a more efficient, more sustainable and greener transport future for Urumqi; the second is regional development, and Urumqi plays a crucial role under the national ‘One Belt, One Road Initiative’; and the third is innovative financing, for the World Bank to partner with the China Development Bank, the project has demonstrated a more sustainable financing arrangement under the New Budget Law”, said Bert Hofman, World Bank’s Country Director for China, Mongolia and Korea.

Rao Guoping, President of the China Development Bank’s Xinjiang Branch, expressed hope to continue working closely with the World Bank to provide long-term financing for infrastructure projects in China. “This is only a starting point for the collaboration between the World Bank and the China Development Bank, we hope to go beyond the transport sector and continue our collaboration in supporting sustainable development in China,” said Rao.

Ma Yilei, Director of Urumqi Municipal Construction Commission, highlighted the important role the project will play in the city’s development of a sustainable and efficient transport network by adding much needed bus terminals, passenger hubs, parking facilities, and maintenance depots.

The project is off to a great start - two of the three BRT lines completed construction and opened to the public in December 2015. During preparation, the World Bank’s project team and Urumqi Municipality worked closely on technical design and advanced procurement to allow an early construction start with retroactive financing. The Bank team visited the two BRT lines and were pleased to see local residents already enjoying the benefits of the project.