Continuing Momentum for Putting a Price on Carbon Pollution 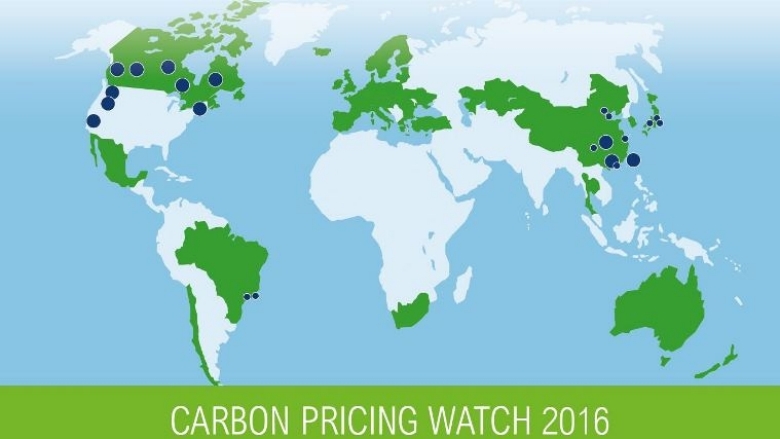 The 2015 year highlighted the growing momentum for countries to voluntarily embrace putting a price on carbon pollution, as a means of cutting emissions.

The report, Carbon Pricing Watch 2016,  shows four new carbon pricing initiatives - in the Republic of Korea, Portugal, Canada’s British Columbia province, and Australia - were launched, or have been in the works, since 2015.

The year also saw China announce plans to launch a national emissions trading scheme (ETS) in 2017. Early estimates in the Carbon Pricing Watch 2016 suggest that if China’s national market is implemented, the global value of carbon pricing initiatives could potentially double to US$100b.

And more than 90 countries included proposals for carbon pricing initiatives in their national plans, the INDCs, the Intended Nationally Determined Contributions, prepared for the historic Paris climate change agreement in December 2015.  In total, they account for 61 percent of global greenhouse gas emissions.

" Putting a price on carbon pollution is essential to help countries deliver on their promises for the Paris climate change agreement, as it’s an efficient and effective way to help cut emissions and send a clear signal to the private sector to invest in cleaner, greener growth. As more countries move to put a price on carbon pollution, we’ll see the benefits to people’s health, the environment and more investments towards a low carbon future. "

Mexico, which generated almost US$1b in revenue in 2014 through a carbon tax, announced it would build a national emissions registry, which with other policies will allow for the implementation of a national carbon market that could come into force in 2018. Canada is exploring options for carbon pricing on a national level.

In 2015, governments raised about US$26b in revenues through carbon pricing mechanisms like emissions trading schemes and carbon taxes, representing 60 percent increase from 2014. The total value of such mechanisms is currently estimated at just below US$50b, according to Carbon Pricing Watch 2016.

“Pricing carbon can send an important signal to the market,” added Vikram Widge, Head of Climate and Carbon Finance at the World Bank Group. “As more countries move to price emissions, we will begin to realize the considerable potential to shift global financing flows away from carbon emissions and into much needed climate smart investments.”

As of today, 40 countries, and over 20 cities, states and regions – including seven of the ten largest economies - are putting a price on carbon. These jurisdictions are the source of a quarter of all greenhouse gas emissions, and carbon pricing initiatives on average cover half their emissions. This amounts to seven gigatons of CO2 equivalent, or 13 percent of GHG emissions – tantamount to closing down 1,800 coal-fired power plants for a year. That’s a three - fold increase over the past decade.

Prepared by ECOFYS and the World Bank Group, the Carbon Pricing Watch 2016 says among the parties planning or considering use of market mechanisms to price carbon pollution are three of the world’s five largest emitters.

The report notes that ahead of the Paris climate change agreement, an unprecedented alliance of Heads of State, city and state leaders, with the support of heads of leading companies, joined forces to urge countries and companies to put a price on carbon pollution. Paris also saw the launch of the Carbon Pricing Leadership Coalition, which brings together governments, business and non-government organizations that seek to take action to accelerate the global uptake of carbon pricing.

And to continue to build momentum, the High Level Panel on Carbon Pricing, a group of heads of state and government leaders and international organizations, laid out a global target to double the emissions covered by carbon pricing initiatives to 25 percent by 2020 and to double this coverage again within a decade.

In preparing for future pricing mechanisms that may come online, companies are also imposing a so-called ‘internal price’ on carbon emissions. In 2015, over 1,000 companies reported using or planning for a price on carbon over the next two years. The largest increases came from companies located in emerging markets – particularly Africa and Asia.