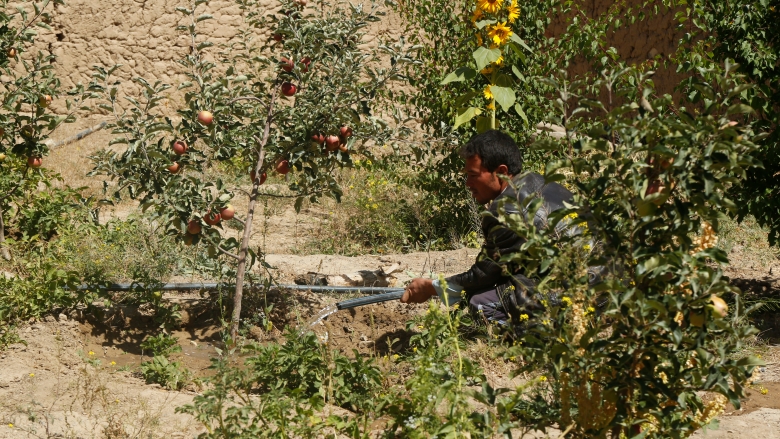 With the help of a solar water pump farmers are able to draw water from the well - the only source of energy needed is sunshine.

BAMYAN CITY, Bamyan Province – The midday sun is shining bright over Dasht-e-Brosna village, highlighting its beautiful landscape. Zamin Ali, 24, irrigates his brother’s orchard under the strong sunshine, he moves from one sapling to another with a hose in his hand.

The orchard, on the outskirts of Bamyan city, is full of apple, peach, plum, and apricot saplings. There are, however, no water sources such as a spring or a canal near the orchard, except for a well from which Zamin draws water three times a week to irrigate the trees.

Until recently, Zamin used a small generator to draw water from the well to irrigate the orchard.  He now draws water from the well with the help of a solar water pump - the only source of energy needed is sunshine. Prior to receiving the solar water pump, the operation was frequently accompanied by problems including the generator’s technical defects and failures. “Having a reliable source of irrigation has helped us significantly increase our harvest and improve our livelihood,” he says.

The generator also created a considerable financial burden as Zamin had to fill it with 10 liters of diesel every week to keep it running. The costs associated with both fueling and repairing the generator were a significant obstacle to his vision to have a sustainable source of income from horticulture.

Zamin and his brother, Jawad Ali, have been growing fruits for the past four years. Zamin’s vision to earn a living from horticulture came a step closer to fruition when they were able to replace the generator with the solar water pump with the assistance of the National Horticulture and Livestock Project  (NHLP). The brothers also received fruit saplings from NHLP that helped enhance their productivity.

NHLP, implemented by the Ministry of Agriculture, Irrigation and Livestock (MAIL), has established or supported orchards and vineyards across the country, using modern horticultural methods. With a $100 million grant support from the Afghanistan Reconstruction Trust Fund (ARTF), NHLP is working towards the overarching goal of increased productivity and overall production of horticultural products, and improved animal production and health. NHLP activities are currently implemented in 120 districts in 23 target provinces, numbers that may grow as conditions warrant. 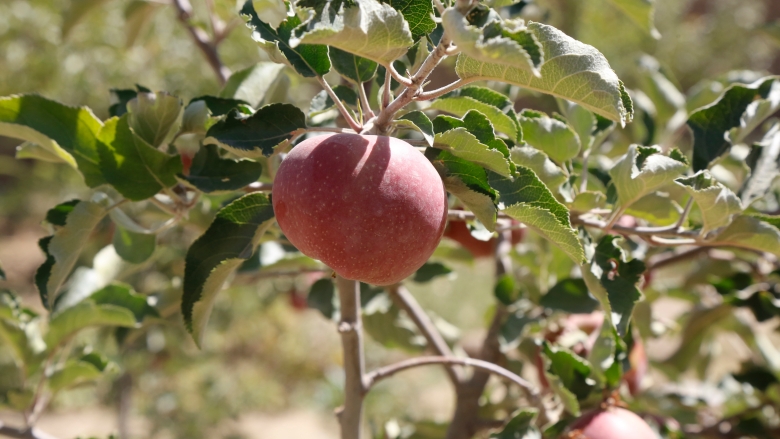 The National Horticulture and Livestock project provides farmers with the varieties of fruit saplings that are compatible to the climate of the province—a crucial factor in enhancing productivity.

Photo Credit: Rumi Consultancy / World Bank
" In a few years, the horticultural harvest will form a big portion of people’s produce in this province. It will make significant contribution to the empowerment of people’s economy.  " 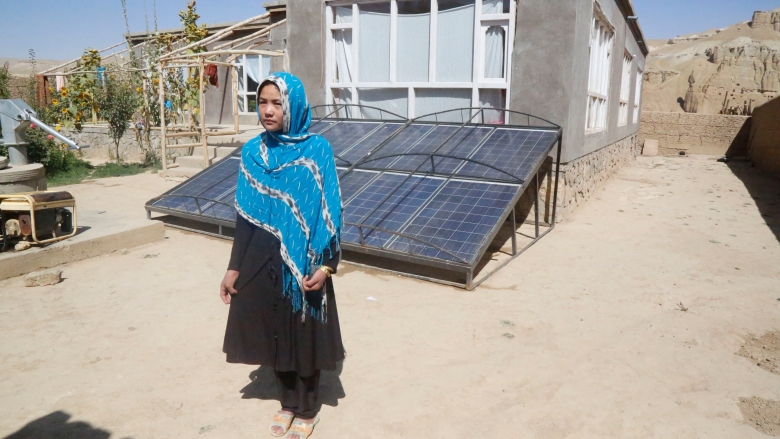 Access to electricity through the solar panels has the added benefit of lighting the home in the evening and his daughter is able to extend her study time, which is wasnt able to do before.

Agriculture and horticulture are the main sources of income for many in Afghanistan. These means of livelihood are particularly important in Bamyan, a poverty-ridden province where other sources of income are minimal because of the geographic position of the province as well as its landscape.

Mahdi Seerat, NHLP provincial coordinator in Bamyan Province, explains that NHLP assists farmers to improve their livelihood by encouraging horticulture. “In addition to other agricultural crops, we try to create an alternative, horticulture, for Bamyan farmers so as to increase their incomes and introduce them to new fruit varieties,” he says.

NHLP has been operating in four districts —Markaz, Yakawolang, Saighan, and Waras—in Bamyan Province since 2013. It provides farmers with the varieties of fruit saplings that are compatible to the climate of the province—a crucial factor in enhancing productivity. “NHLP’s support has encouraged farmers to engage in horticulture in Bamyan Province,” says Mahdi Seerat. “In a few years, the horticultural harvest will form a big portion of people’s produce in this province. It will make significant contribution to the empowerment of people’s economy.”

With the help of local farmers, NHLP has turned about 200 hectares of land into orchards and vineyards in Bamyan Province. The orchards grow a variety of fruit trees including apple, pomegranate, pear, cherry, almond, plum, and apricot. Using modern methods, the orchards are established based on soil type, local area climate, regular irrigation, and other essential conditions for horticulture. Farmers learn to fertilize, prune, weed, and irrigate their orchards at the right time, resulting in better harvests.

In addition, NHLP supports farmers to access modern equipment, such as the solar water pump that Zamin and Jawad Ali received. The brothers contributed 25 percent of the pump’s cost. “We are lucky that we got a solar water pump from NHLP in Bamyan Province,” says Jawad, 34. Each set of the solar water pump provided by NHLP includes 10 solar panels, a solar pole, an electric inverter, and a bore pump.

Many residents in Bamyan city do not have access to round-the-clock electricity service, in spite of a solar power plant built by the Ministry of Energy and Water. Access to its services has been restrictive due to its limited reach and relatively high costs. Jawad and his family were among those who had no electricity service in their home, and had to use other sources of lighting.

Jawad is grateful to have access to electricity throughout the day, thanks to the solar panels. “In addition to using the solar water pump for convenient irrigation of our orchard, we can now light our home in the evening using the batteries we connect to the solar panels during the day,” he says.