Public-Private Partnerships for Jobs in Libya Are Key for Youth and Women, Now More Than Ever 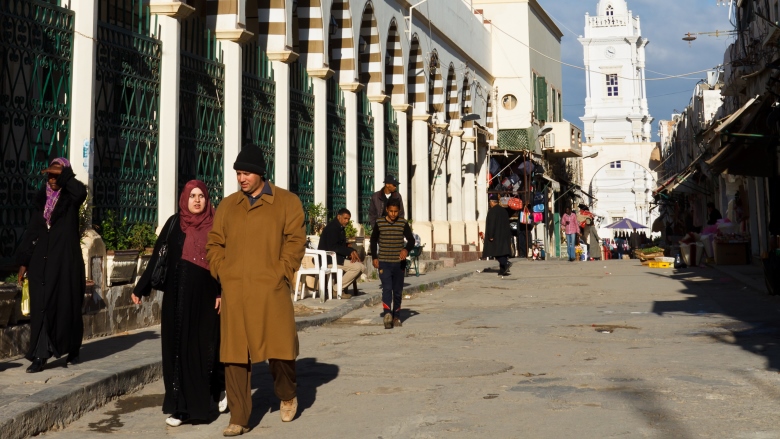 Once security is fully established, Libya will face the double challenges shared by the rest of the Middle East and North Africa (MENA)—namely the need for more inclusive jobs and stable institutions to facilitate private sector growth. These are the sorts of challenges that a transitional government will need to address quickly to create opportunities, now limited, for reintegrating unemployed youth and ex-combatants into the country’s slender labor market. This will be crucial for consolidating peace and stability.

The combined challenges of stable institutions and employment go to the heart of how an economy is structured, and what, over decades, a society has become. According to a 2015 report by the World Bank, Labor Market Dynamics in Libya: Reintegration for Recovery, Libya has the second highest unemployment rate in the world, 19% as of 2012-2014, up from 13% in 2010. And the rate for Libyan youth (age 15–25) is much higher, at 48%, as it is for women, at 25%.  About 30% of firms report difficulty finding qualified Libyans.

The report’s objective is to provide an assessment of Libya’s labor market and discuss a broader jobs strategy, using national labor force surveys and in-depth qualitative research with job seekers and firms in Libya during 2012 and 2014. Even then, when Libyan firms were feeling relatively optimistic in 2012, with oil prices still high, a projected growth rate of 6% for 2012–14 needed to be twice that to absorb Libyans wanting to enter the job market.

Libya’s oil-rich years had also had a profound impact on Libyan society.  That unemployment was on the rise even before the 2011 uprising reflected some very fundamental problems. The country’s population of about 6 million (before 2011) had grown dependent upon state largesse. Subsidies on food, energy, and housing dwarfed even those in the rest of MENA. Just before the current conflict broke out in mid-2014, its labor force stood at about 1.9 million, with the vast majority of workers found in the public sector   (77 %). Agriculture, which had flourished in the pre-Qaddafi era, employed only 1% of Libya’s workforce and industry (primarily oil) less than 10%, with the remainder employed in the services sector.

With limited job-relevant skills among nationals, non-nationals were hired into unskilled and skilled jobs. Foreigners had made up nearly half Libya’s labor force of 2.6 million until 2011, when about 1 million of them fled. It is a different story now: since oil prices tumbled in late 2014, Libya’s economy has been in recession. Attacks on oil fields mean that oil production is about a quarter of what it used be.

Overall, firms perceived that their business cycles were resuming, and were upbeat about short- and long-term growth. This optimism was the case in every sector except construction, which had not recovered from the halting of large government projects. Many firms reported recruiting Libyan staff; some had replaced foreign labor with Libyan labor. Many firms expressed a willingness to pay for training.

So, with agriculture neglected and the private sector constrained, where can new jobs be created?

To support stabilization and pave the way for post-conflict recovery, the report says trade, services, tourism, and agribusiness, are all possible areas for job placement, on-the-job training in firms and entrepreneurship.  It also shows that initiatives can start now.   Innovative public-private partnerships are emerging at local levels and have continued operating even during the current conflict.  In Tripoli, for example, the local municipal council and a non-governmental organization had opened an employment center in 2014 that had begun placing youth in jobs in firms, and in late 2015 mobilized an investor forum to support young entrepreneurs looking to expand.

On the back of this, the Bank’s report has three key recommendations for Libyan policymakers and, especially, local actors to consider, even within the ongoing crisis.

“When Libya suddenly found itself free of Qaddafi in October 2011, its public financial system could hardly function. A modern public administration, absent for 40 years, had yet to be created,” states the report. Although the real work on Libya’s economy will start when a full political reconciliation is achieved, some initiatives can be taken now to help pave the way.