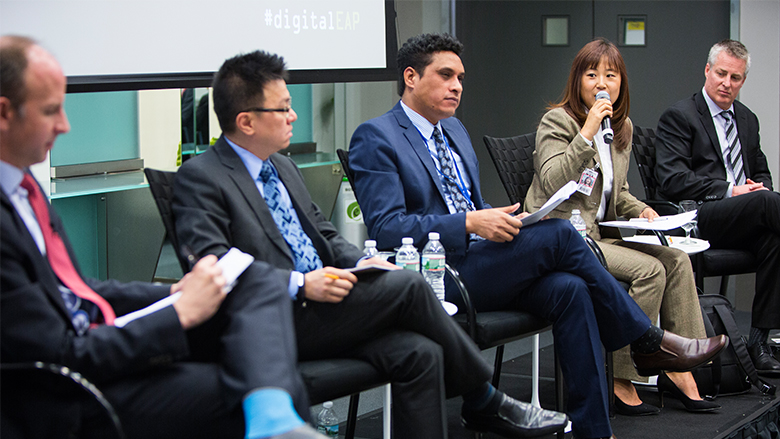 WASHINGTON, April 21 – East Asia and Pacific has the world’s largest and fastest-growing internet user base, but the region also has gaps in access between higher- and lower-income countries, a panel of experts said at a World Bank event on Friday.

“More than 40% of those who live in the region have access to the internet – a number that has increased twelve-fold since 2000,” said Victoria Kwakwa, the World Bank’s vice president for the East Asia Pacific Region. “Yet internet access varies significantly across countries in the region. While 85% of people in developed East Asia have access to the internet, this proportion is much lower – less than 20% – in the Pacific Island Countries.”

The panel discussion, part of the World Bank/IMF Spring Meetings, included Helder Lopes, the vice finance minister of Timor-Leste, which has the lowest percentage of internet users in East Asia, at just 1.1% of the population. It also featured Chinese internet entrepreneur, Cindy Mi of VIPKID; the editor-in-chief of VietnamPlus and digital media innovator, Le Quoc Minh of Vietnam, and Bill Plummer, vice president of strategic and external affairs of Huawei Technologies. The event was moderated by Kevin Delaney, editor-in-chief of Quartz.

Kwakwa launched the panel discussion by reviewing the results of the 2016 World Development Report, “Digital Dividends”. It showed the internet, mobile phones and related technologies have allowed businesses to become more productive, offered new opportunities and allowed governments to improve the way they work.

Across the region, more than 85 in 100 people own a mobile phone and more than 40 in 100 people use the internet – levels that are similar to the rest of the world. Digital technologies also have spread rapidly among businesses and governments, with nearly 60% of businesses in East Asia and Pacific having an internet connection, compared with 50% in the rest of the world.

In particular, China and Vietnam have seen large and sustained growth in internet users over the last decade. Mi and Minh said it has affected all aspects of business.

“In Vietnam, internet changed everything,” said Minh, the man behind Vietnam News Agency’s new media technologies development, including a unique news application that runs on 500 different mobile phones. One of his innovative journalism projects included RapNewsPlus, which delivers news via rap music to a young audience.

Minh, who said he stopped reading newspapers and watching TV “a long time ago,” said his news organization is seeking to find new ways to make news interesting to a young, digitally connected audience.

Mi, whose online company teaches English to 20,000 children from China by connecting them with 2,000 instructors in the U.S., said she and other digital entrepreneurs have benefitted from a massive domestic market as well as policies in China that help people with innovative ideas to launch startups. Mi founded VIPKID in 2013 and it has quickly become one of China’s leading education startups, growing 40% month over month and attracting international investors and venture capitalists.

But while some in the region are reaping the benefits of an interconnected world, East Asia Pacific is also home to 30% of the world’s offline population – second highest after South Asia. The region has six of the top 20 countries with the highest number of people offline, with China and Indonesia together accounting for nearly 80% of the entire offline population in East Asia Pacific.

Lopes said the lack of internet is hurting his country and makes it hard to attract investors. For example, he said a major hotel chain saw great potential in Timor-Leste but said they did not want to invest until there was better internet access. In addition, he said the lack of internet access impacts the education of children, efficiency of government services and access to healthcare.

The internet has great potential to promote development in the region, but the digital revolution still depends on strong analog foundations.

In many countries, one of the greatest challenges is building the infrastructure and making internet universal, especially in rural areas.  Plummer said there were many innovative ideas being investigated to expand broadband to underserved rural areas – everything from balloons to drones to solar-powered boosters.

“But to usher in true connectivity, it will take a lot of flavors and a lot of creativity and a lot of investment,” Plummer said.  He said countries needed to include an information and communication technology (ICT) element in their national development plan. That will allow them to expand all types of infrastructure – from roads to electricity to internet access – at the same time.

In addition to helping with infrastructure and regulatory reforms, the World Bank Group is increasingly integrating ICT components into projects in education, health and governance to boost connectivity and create opportunities for improved prosperity.

As infrastructure improves and the pace of internet access picks up in poorer countries, a nation like Myanmar, which is liberalizing its telecom sector, could soon become one of the fastest-growing internet markets in the world.