Acting on disability discrimination in Jamaica 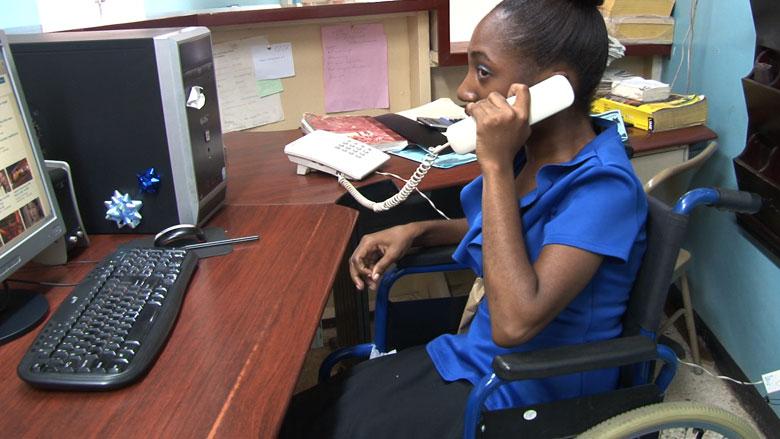 Kavian Moran answers phones at the YMCA in Kingston, Jamaica

World Bank
Around 200,000 Jamaicans live with a disability, however they are disproportionately affected by poverty and unemployment.

Like so many of her peers, high-school student Shanise has plans for her future. Bright and focused, she talks proudly of her dreams of becoming a social worker once she leaves school.

What makes Shanise’s story different is that she’s disabled.

In 2001, just over 6% of the population in Jamaica identified as living with a disability according to census data - over 160,000 people. Of these individuals, however, fewer than 1% are in paid employment, making the disabled community one of the most vulnerable groups in Jamaica.

And Jamaica is far from alone.

One in 10 Latin Americans were considered to be living with disability in 2004, 82% of whom lived in poverty. In fact, worldwide, the situation is so acute, the World Bank considers disability to be “an important cause and consequence of poverty in the region.”

However time is being called on disability discrimination. With current government estimates of up to 15% of Jamaicans living with a disability, Jamaica passed the Disability Act to promote and protect their rights in 2014.

Once fully implemented, the Act promises to:

“This is a priority for the government,” explained Christine Hendricks, Executive Director for Jamaica Council for Persons with Disabilities, which will be responsible for enforcing the act. “Once the act is implemented, we hope to see visible evidence of change within a year.”

In Jamaica, location, the severity of their disability and the ease of movement of an individual has a significant impact on their ability to access the full range of services that society offers. But practical concerns are just one side of the discrimination faced by those with a disability.

Negative attitudes and prejudices surrounding the capabilities of the individual are a significant barrier to the full inclusion of people with a disability into Jamaican society.

“There are high levels of stigma by the general public and employers regarding persons with disabilities and their abilities, which often reinforce the social exclusion faced by this population,” Onishi stated.

Shanise has fought against such stereotypes her whole life and is a vehement spokesperson for the disabled community.

“We being here [in work] puts others out there so more persons see that we are just like everybody else and we have rights and we can do stuff,” she affirmed.

Shanise, along with 159 of her peers, is participating in a key project, with support from the World Bank through a Recipient Executed Trust Fund - the Social and Economic Inclusion of Persons with Disabilities (SEIP) Project – funded by the Japan Policy and Human Resources Development Fund (PHRD). The project seeks to improve the social and economic inclusion of people with disabilities into the wider Jamaican society.

Over 360 young people with disabilities have been trained so far in two rounds of training since the start of the project in July, 2013, including those in the current Round 2 cohort, in which Shanise is participating. A third and final training round is scheduled to begin in August, 2016.

Given that individuals living with a disability are less likely globally to go to school, the project also engages children with disabilities aged 0-6 years by providing early stimulation during their early developmental years. Then for those of working age, the focus changes to increase their vocational skills and boost employability via on the job placements and training programmes.

However, while a considerable number of job attachments have been successfully completed, converting these to long term placements still remains a challenge. Of the 123 individuals who received employment during Round 1, 17 percent were still employed six months after completing training. However, as subsequent training rounds are completed, an increase in this employment rate is anticipated by the project’s close.

It’s hoped that by increasing the number of people with a disability actively participating in the workplace, any prejudices among their colleagues will be cast out by their capabilities and achievements.

“I can do anything, I can go anywhere,” explained Shanise “[This project] has given me the drive and the experience to prove that,” she added.

Globally, half of people living with a disability cannot afford health care, and for those with access to practitioners, they are more than twice as likely to find their medic’s skills inadequate for their needs.

In Jamaica, access to healthcare - as with so many other public services - greatly varies depending on where the individual is, their disability, how mobile they are and how easily they can communicate with the healthcare professional.

As a result, certain groups fall through the cracks and do not receive the level of treatment that they require. Such is the case with HIV prevention, a key programme in a region with some of the highest rates of infection among adults in the world.

“There's a lot of myths in the hearing impaired community about condom use, STIs, and sexual health in general,” explained Denzil Buckley, a peer mentor for Jamaica AIDS Support for Life. “Across the board the persons with disabilities are neglected, maybe because it is believe that they are not having sex,” he surmised.

Sign-language translators and peer-to-peer mentoring go a long way to bridging this gap, both by offering clearer communication and dispelling the myths held by those on both sides of the doctor’s desk.

“For peer programs for persons with disabilities, they really gravitate towards the services offered,” highlighted Buckley, “not only the education/information but they’re usually more open and more willing to use facilities where an interpreter is present when seeing the doctor.”