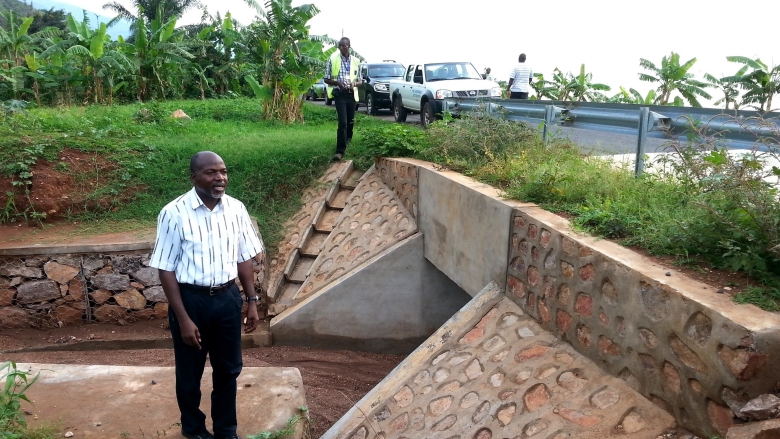 Small and landlocked, Burundi depends on roads, and only roads, to move its people and goods. And as climate change leads to increasingly extreme weather, those roads are at risk from flooding and landslides.

Heavy rain in February of 2104 in and around Burundi’s capital city, Bujumbura, killed about 80 people, washed away a large market and left 20,000 homeless. The floods also damaged key national highways and urban roads. In response to this, the World Bank approved the Burundi Infrastructure Resilience Emergency Project to be financed by IDA, the Bank’s fund for the poorest nations. The project’s goals are twofold:

“Burundi is very sensitive to climate change. Heavy rains are more frequent and powerful and the floods are more damaging, so we have to build ‘build back better,’” says Noroarisoa Rabefaniraka, a senior transportation expert at the World Bank. “We are adapting the dimensions of new infrastructure to mitigate the worst climate conditions, like a 100 year storm, because this kind of weather is happening more often. So now we make sure the material we use is climate resilient.”

Transportation, Rabefaniraka adds, is key to country’s development. She says roads encourage economic activity and, of importance to Burundi, promote peace. Since its independence in 1962, Burundi has been stuck in an unending cycle of conflict. The violence has increased ethnic and regional divisions while deepening already extreme poverty.

So, in addition to making key roads, highways and bridges more resilient to extreme weather, the project also aims to help the country recover from war by creating jobs. And earlier iteration of the project created 66,000 jobs for rural poor people. And some of that work remains active, since about 1,500 kilometers of roads are maintained yearly.

Improving basic infrastructure has made an impact on people’s lives in Burundi. The operating cost of using a car or truck has dropped, as drivers no longer charge extra fees for using bad roads. It is faster to move people and products. People can get access to education, hospitals and markets.  And building in climate resilience means the roads will hold up longer, and recover more quickly, in the event of a natural disaster.  The project also aims to beef up Burundi’s disaster relief management, from rapid assessment of damage to rapid repair.

Roads are the only form of transportation within Burundi. The country’s small size limits internal air traffic, waterways are underdeveloped. To sell its coffee crop, vegetables and other produce, which account for more than 50 percent of the country’s national product, Burundi relies on international roads. And the high costs of building and maintaining infrastructure, combined with high transport costs, limit economic growth in a largely agrarian society.

The new proposed project will finance a new transport strategy for Burundi, including plans to investment in maintenance for the next 5-10 years. Keeping the roads open and clear of landslide debris or flood damage is vital to keeping the country connected to its neighbors and to the rest of the world.