Fransisca gave birth to her first son in the jungle with help from other women with no access to health services or medicines. Her story is common for women in Bougainville, a region which is only beginning to recover from a ten-year civil war. In 2012, Fransica formed the Koro Women’s Group to improve the lives of the women in the area. Through a World Bank supported project, the group managed to obtain grants to help build a health post. “Now we have our own health post, pregnant women have their check-ups and they have safer births,” said Fransisca.

Bougainville, Papua New Guinea, March 8, 2016 – “I was pregnant with my first son in the jungle,” whispers Francisca Kameula, a mother-of-four from the remote community of Rovo, in the mountainous central hills of Bougainville Island.

“I gave birth to him there too. All the old women from my village helped me. We had no access to any health services, no access to medicines, and we never had any antenatal checks.”

Francisca’s story is all-too-common across the Autonomous Region of Bougainville, in the far east of Papua New Guinea. The region is only beginning its recovery from the ten-year conflict that killed more than 10,000 civilians, and left many thousands more fleeing for their lives – just as Francisca and her community did – into the thick, mountainous jungle that covers the island.

“Time after time, women had difficult childbirth experiences in the jungle. Many times the mother or child died during childbirth,” says Francisca.

For the people of rural communities like Rovo the lack of health services is an ever-present threat. Bougainville has some of the highest rates of maternal mortality in Asia-Pacific – with 55 deaths for every 1,000 children under the age of one, just eight medical staff per 21,000 people, and one in four pregnancy cases in Bougainville’s Buin Hospital classified as an emergency.

Yet just as the development challenges are immense, so is Bougainvilleans’ determination to improve life across the region. This determination is not, however, easily spotted on Francisca Kameula’s face. She speaks in hushed tones about her life before, during and after the conflict, and about her dreams for her and her children’s future. But ask her about the lack of health services in her community, and her eyes widen, with fierce determination shining through.

“Because of the civil war, there were no government health services. So we could not access clinics or even basic posts for medicines. For pregnant women at that time, we just had to have our babies in the bush,” she says. 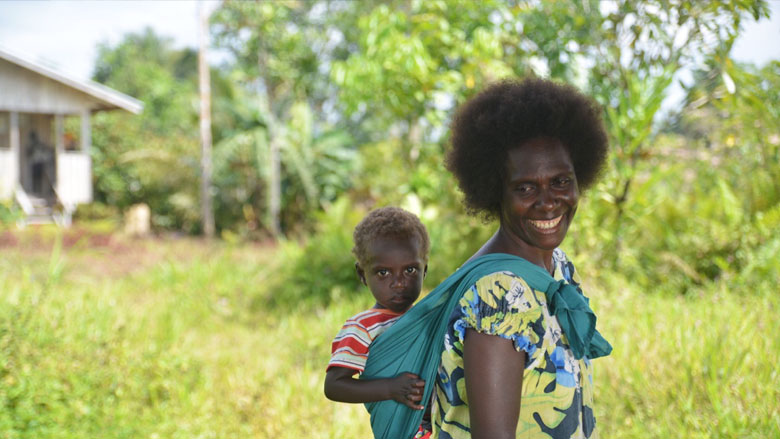 The World Bank/Tom Perry
" Because of the civil war, there were no government health services. So we could not access clinics or even basic posts for medicines. For pregnant women at that time, we just had to have our babies in the bush. "

Mother of four children in Bougainville.

The shadow cast by the Bougainville conflict continues to be a long one. Collapsed infrastructure such as bridges, roads and houses remain scattered and broken, and essential services such as health and education, decimated during the crisis, have continued to struggle despite the restoration of peace.

Conflict is over and villagers have returned to their homes, yet women still face difficulties accessing even the most basic health care for themselves and their children. With few passable roads, expensive fuel costs, impassable terrain, even getting to the few health posts that are running across the 9,300-kilometer-square island remains an enormous – and often dangerous – burden. The nearest clinic – located in central north of Bougainville Island in the town of Arawa – was some five hours drive by truck in good weather.

For her monthly antenatal checks in Arawa, Francisca was faced with at least a five hour journey, which was challenging enough in normal circumstances, and even more so for a heavily pregnant woman.

“To get to the main road to catch a truck, we’d have to come down into the valley, cross the creeks and walk up the hill again to get to the main road. The roads were very bad, the bridges were falling away. Drivers would try to maneuver their trucks carefully on the broken bridge to avoid flipping over.”

“And because I had to travel for my monthly antenatal checks at Arawa Health Center, each time we came to a broken bridge, I used to feel very scared that the bridge might give way and we would fall and die.”

Experiences like this drove her determination to improve health services for women in her community.

In 2012, Francisca formed the Koro Women’s Group to improve the lives of the women in her area. She and others began asking around about applying for community projects, with the idea of building a health clinic closer to the community.

She soon heard about the Inclusive Development in Post-Conflict Bougainville Project, led by the Government of the Autonomous Region of Bougainville, supported by the World Bank and the Australian Government. The project was set up to give women a stronger voice in Bougainville’s development; to ensure decisions on community priorities – a process that is all-too-often led solely by men – positively support women’s needs.

“In the past there were no health facilities in this community. This prompted us to work hard towards getting a health post built in our community. We really wanted to have a health post in our village,” said Francisca.

And work hard they did. Within months, with the support of the whole community – including her husband Andrew, who was taking nursing classes – the Koro Women’s Group secured funding for the community health post.

Two years on, the health center has not only improved the maternal health of mothers and children in the community, but is also now able to provide other basic health care and treatment to the surrounding communities.

“Now we have our own health post, pregnant women have their check-ups and they have safer births,” said Francisca.