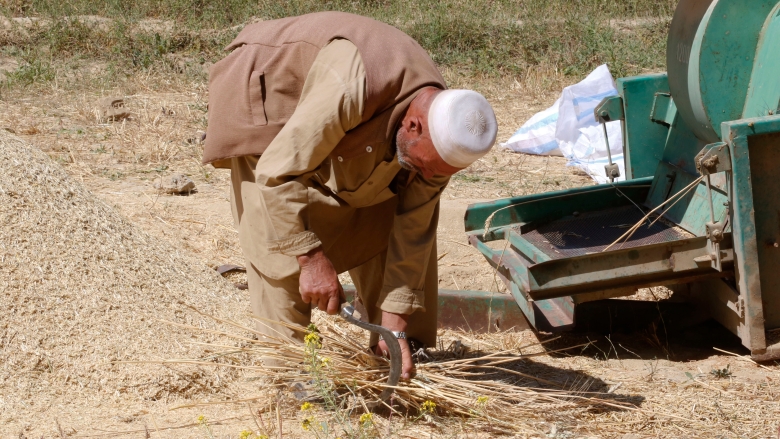 The Mullah Ghulam Research Farm was not in a good condition two years ago. The farm’s soil was not ready for agriculture and cultivation of field crops but a lot has changed since then.

BAMYAN CITY, Bamyan Province –The noise of the tractor breaks the morning silence in Mullah Ghulam village as farmers harvest wheat at the research farm. There is a sense of satisfaction among the farmers as they finish the task, harvesting the product of their year’s hard work.

The Mullah Ghulam Research Farm, owned by the Ministry of Agriculture, Irrigation and Livestock (MAIL), produces breeder seeds for subsequent multiplication to foundation seeds. The farm is one of 10 research farms of the Agricultural Research Institute of Afghanistan (ARIA) that produces breeder seeds from nucleus seeds produced by the institute.

Qurban Omid, director of wheat research in Mullah Ghulam Research Farm, says: “This year we will introduce three types of breeder seeds, including Darulaman-07, Bamyan-013, and Solh, to the Improved Seed Enterprise for mass production.”

Mullah Ghulam Research Farm, located in the capital city of Bamyan Province, occupies an area of some 134,000 square meters. It is one of the research farms in central Afghanistan that is being supported by the Afghanistan Agriculture Inputs Project (AAIP), implemented by MAIL with funding support from the Afghanistan Reconstruction Trust Fund (ARTF).

AAIP aims to increase adoption of improved crop production technologies across the country. Among its many activities are actions to strengthen ongoing research and seed production activities, which are resulting in the improvement of sustainable and quality seed production, and release of new high-yielding and resistant wheat varieties. 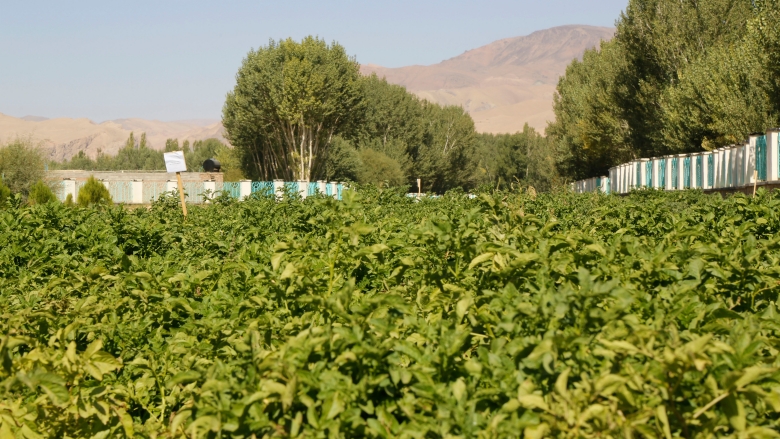 With the help of the Afghanistan Agricultural Imputs Project, the research farm has increased its capacity, producing 2,625 kg of breeder seeds.

Rumi Consultancy / World Bank
" Research lies at the heart of agriculture. In the absence of research, farmers will not harvest good crops with higher yields from their farmlands.  "

Farmer Hedayatullah, 50, has been working at the farm for eight years and has seen the considerable improvements take place. “Mullah Ghulam Research Farm was not in a good condition two years ago. The farm’s soil was not ready for agriculture and cultivation of field crops,” he says. “We usually faced water shortage and harvested only a small amount of crops. Now most of these problems have been solved.”

MAIL built a protective wall around the farm four years ago to prevent cars from driving through, which had resulted in damage to the soil’s fertility. With the land now ready for cultivation again and, with AAIP support, it was leveled and prepared for cultivation and irrigation—a deep well was dug for irrigation and the soil fertilized with manure and chemical fertilizers. Moreover, AAIP is planning to further develop the farm to improve productivity through laser land leveling, establishing irrigation channels, and renovating office buildings.

AAIP began its support with a range of technical assistance to the farm’s staff to enable them to carry out research projects in accordance with government standards, says Mohammad Sarwar Aryan, director of Mullah Ghulam Research Farm. “The farm researches wheat, potato, soybean, and various other vegetable crops, but AAIP covers only research experiments on potato and wheat seeds.”

Research farms across the country conduct adaptive research on seeds that are imported from abroad, validating the adaption of specific varieties and technologies to the environmental characteristics of a given area. Earlier, imported seeds distributed directly to farmers had been found to yield poor harvests.

MAIL’s research farms, therefore, first conduct scientific research on the imported seeds, studying their adaptation and yield potential to local conditions, after which the three classes of seeds are produced by ARIA, ISE, and PSEs, eventually reaching farmers in the form of ‘improved’ seeds. “This year alone, Mullah Ghulam Research Farm has been researching 358 types of wheat seeds under advanced trials and 15 types of potato seeds,” says Mohammad Sarwar Aryan.

Through the research process, agricultural researchers observe the adaptability of the new seeds under local climates. They test the seeds for different characteristics, e.g. need for less water, resistance to prevalent diseases, and whether they are high yielding. Wheat seeds possessing such qualities usually pass through the research laboratories and are designated breeder seeds, which are subsequently multiplied to foundation seeds and sold to PSEs for mass production and eventual distribution to farming communities.

“Research lies at the heart of agriculture,” says Abdul Wahid Ferozi, AAIP regional plant breeder at Mullah Ghulam Research Farm. “In the absence of research, farmers will not harvest good crops with higher yields from their farmlands. We conduct research here to improve their living and welfare conditions.” Research shows that cultivating local wheat seeds on 0.2 hectares of farmland will produce only 420 kg of wheat, whereas improved wheat seeds in the same area will yield 910 kg.