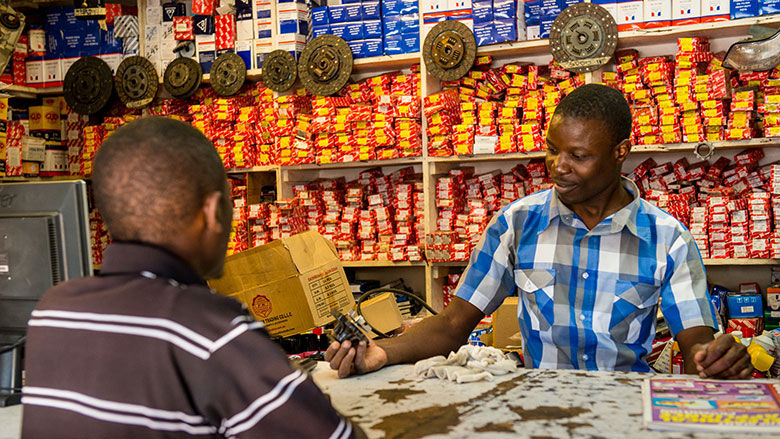 A new registry aims to help small shop owners secure business loans by allowing them to use moveable assets as collateral.

LILONGWE, February 4, 2016 –  Chisomo Jumbe, a small businessman in Salima District in central Malawi, wrote the World Bank in October last year seeking a loan of $3,000 to pay for a transformer to have his maize mill connected to electricity. He says he took this step because commercial banks and microfinance institutions in Salima refused to give him a loan to get his maize mill business rolling.

“If only I can have power at the site, my business will start operating, then I can easily source money from other lenders,” Jumbe said. But with the establishment of the Personal Property Security Registry system, otherwise called the collateral registry in Malawi, Jumbe no longer needs to worry. His new maize mill, even without the electricity connection, would now qualify as collateral for a loan.

The collateral registry, launched this month, will enable Malawians to use movable assets to get a loan. Such assets include motor vehicles, livestock, crops, maize mill, equipment, or accounts receivable. As in many other countries, financial institutions in Malawi traditionally require fixed assets such as land or buildings as collateral for loans.

The collateral registry is an online public database that allows financial institutions to register security interests in movable property, and mitigate the risk of customers.

“With the collateral registry, banks should be able to diversify their credit portfolio from mostly corporates to include small and medium enterprises,” said Misheck Esau, president of the Banker’s Association of Malawi.

“Such a positive response from the banks would be in sync with the expectation of the Malawi government when it established the collateral registry, otherwise the reform would be meaningless,” said Samuel Tembenu, Minister of Justice and Constitutional Affairs. Through the Department of the Registrar-General, the ministry championed and houses the collateral registry.

The World Bank Group supported the establishment of the registry with $550,000 financing from the International Finance Corporation (IFC) and the International Development Association (IDA). With the launch of the collateral registry, Malawi joins Ghana and Liberia as countries that have established such modern online systems in Sub-Saharan Africa.

The collateral registry was launched jointly with the online Malawi Business Registration System (MBRS) by the country’s Vice President Honorable Dr. Saulos Chilima, who also chairs the Public Sector Reforms Commission. The MBRS will facilitate the online registration of businesses, and automatically generate a taxpayer identification number for the business. Through the system, business permit processing time may be cut by more than half, significantly reducing transaction costs and saving time for businesses.

The MBRS is a fundamental shift from the previous manual system of registering businesses whose challenges caused a large number of micro and small enterprises to remain unregistered. Jumbe’s business is called Comfort Investments and remains unregistered to date. With the MBRS, he will be able to register his business from the comfort of his home or an internet café nearby. He will also make his payment at a bank in Salima District where he lives, saving him a trip   to the commercial capital miles away to register his business.

The World Bank, which also financed the establishment of the MBRS, continues to support systems reforms to make it easier for various levels of private sector investment.

“We are supporting the Immigration Department to modernize and automate the business permit system, as well as the Malawi Trade Portal to make it easier for entrepreneurs to export their products,” said  . Laura Kullenberg, country manager for the World Bank in Malawi.