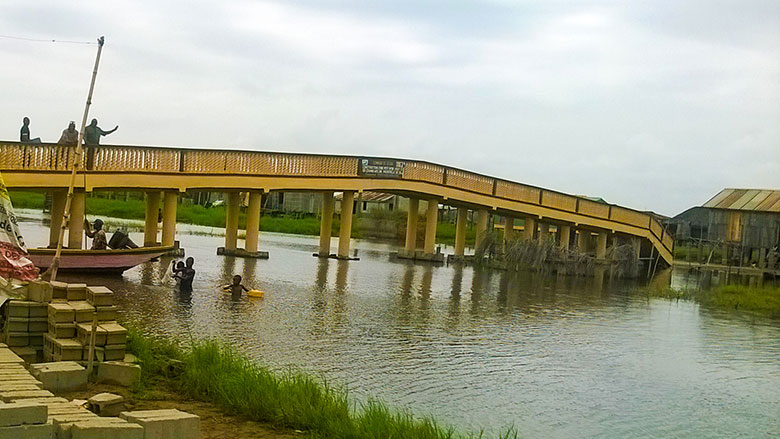 VEKKY-DAHO, January 22, 2016—For as long as they can remember, the residents of Sô-Ava, a municipality in the Atlantique Department of Benin, relied on pirogues, or local canoes, to travel between villages. Their stilt-supported dwellings made traveling by foot all but impossible.

"As we are completely surrounded by water, pirogues were really the only way to travel between huts. Traveling to other villages was time consuming and our situation made everything more complicated. We also faced a serious risk of drowning," explains Gabriel Doguenou, Head of the Vekky-Daho district.

However, construction works launched in March 2015 opened the door to a brighter future for the residents of Tchanhoué, Sô-Zounko, and Vekky-Daho. Under the Decentralized Community Driven Services Project (PSDCC), a 200-meter-long pathway with a 50-meter-long footbridge extension was built in order to link these three communities, which already share a similar history, culture, and economy. Built in only four months, this pedestrian bridge is remarkable for its size and the speed with which it was completed. It will change the lives of over 35,000 residents.

" This footbridge is a godsend for the people of Sô-Tchanhoué, Sô-Zounko, and Vekky-Daho. We are now able to travel safely and quickly between the three villages. "

"This footbridge is a godsend for the people of Sô-Tchanhoué, Sô-Zounko, and Vekky-Daho. We are now able to travel safely and quickly between the three villages. It’s a significant improvement that will help increase economic activity and trade throughout the year," rejoiced Antoine Kakessou, Head of Sô-Ava’s Department for Planning and Local Development.

Beneficiary populations and local authorities alike invested a significant amount of effort into making this pedestrian access a reality, and are pleased that their efforts have been rewarded in such a short amount of time.

"We were 100% committed to seeing this project through to completion after the villagers expressed their desire for this bridge to be built at a general assembly.  We are extremely satisfied with these works because they have changed our everyday lives for the better. Our children no longer have to be accompanied on their way to school," said a delighted Reine Adigbi, member of the Community Development Association of Vekky-Daho.

The Sô-Ava footbridge cost over 21 million francs CFA (roughly $40,000). Prior to its construction, several environmental, social, and geotechnical studies were undertaken to ensure its durability. In light of climate-related risks, stress tests were also conducted to assess its resistance to severe weather conditions.

"Sô-Ava is unique given its concentration of lakeside communities. We took all the necessary measures in order to ensure that this footbridge stands the test of time in order to provide a permanent solution to the accessibility issues villagers previously encountered," noted Germain Ouin Ouro, PSDCC Executive Secretary.

The PSDCC, financed by the World Bank, was launched in January 2013. The project aims to improve impoverished communities' access to basic socioeconomic infrastructure through a community-driven approach to development. The project also includes a pilot social safety net program. Based on the mid-term review of the project conducted in Cotonou from November 30 to December 16, 2015, the results are promising—256,000 people, 52% of which are women, have so far benefited from the project.

In addition, the PSDCC supports community development in the context of the implementation of the National Decentralization and Deconcentration Policy. The project provides financial resources to communities through the Communal Development Support Fund (FADEC) with the goal of building additional basic infrastructure in 1,000 villages and increasing the population’s access to basic social services.