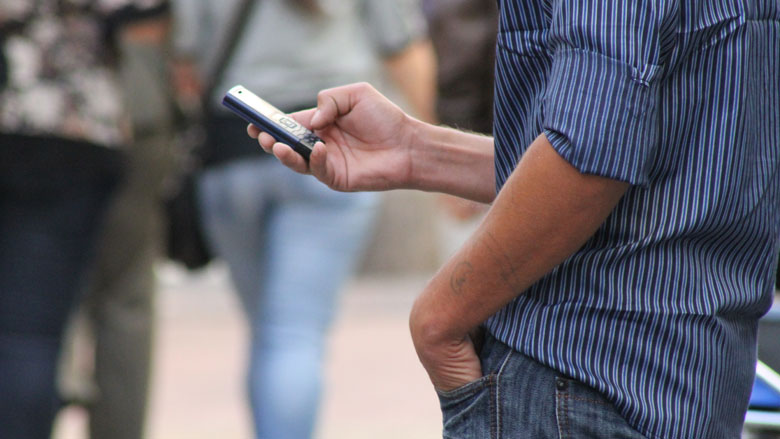 How many people around you have a phone in their hands?

In Latin America’s cities the mobile is king. From adverts for the next smartphone to the obligatory WhatsApp chat, it’s not unusual today to see people running their lives through their touch-screen.

In a world in the throws of the biggest information and communication revolution ever seen, Latin America is one of the most active regions: mobile phone subscriptions tripled in the region in the past decade.

Seven out of ten people in the world today have a mobile phone, according to the 2016 WOrld Development report, developed by the World Bank and which focuses on digital dividends/ However, despite the rapid growth of the technology, 60% of the world’s population don’t have access to the Internet, greatly reducing the technology’s potential reach and desired benefits.

“For many people, today’s increase in access to digital technologies brings more choice and greater convenience,” explains the report. “Through inclusion, efficiency, and innovation, access provides opportunities that were previously out of reach to the poor and disadvantaged.”

But can a mobile phone really boost development? Here are the three key points

Surrounded by technology but the digital divide still exists

While the numbers show that digital access has grown, up to now the benefits of the rapid expansion of digital technology have principally favoured those with money, qualifications or influence in the world. It is these groups who are best positioned to take advantage of the advancements, according to the reports authors, Deepak Mishra and Uwe Deichmann.

For example, in Latin America just one in ten poor households have access to the Web. As a result, the growth of this technology is bypassing exactly those people whose with the greatest need to connect to the wider world.

In fact, at a country level, level of connectivity is clearly tied to the relative wealth of the country: the OECS, Chile and Uruguay lead the region with the highest percentage of their citizens connected to the web. Whereas Brazil - which enjoyed a period of strong growth during the first decade of this new millennium - is among the top five countries with the most Internet users in the world.

On the other side of the coin, however, 98 million Brazilians and 70 million Mexicans don’t have Internet access. And in Haiti, Honduras, Nicaragua and Guatemala, less than 20% of their citizens are connected.

Such gaps lead to information inequality and prevent the poorest from taking advantage of the innate potential of digital technology to reduce costs and barriers to new markets and education, according to the report.

" For many people, today’s increase in access to digital technologies brings more choice and greater convenience. Through inclusion, efficiency, and innovation, access provides opportunities that were previously out of reach to the poor and disadvantaged.  "
Digital dividends report

Employing the next generation

Latin America already has the highest proportion of Internet users under 25 years old in the world, and they are the biggest consumers of web content, spending over 27 minutes online per visit.

Much of this time is spent on social media, however digital technology offers more than a means to entertain. It can also create jobs.

In the Caribbean, where Internet access is almost universal, over four thousand youth have found work in e-lancing, working remotely for multinational companies in tasks as diverse as animation to customer service to programming. For a region where traditional jobs don’t exist anymore and youth unemployment has reached 30%, the digital sector truly offers a unique opportunity for those looking for a job.

The internet enables many small firms to participate in global trade, thus leading to more

A weapon against poverty

It’s estimated that Latin America’s 15 million family farms work around 400 million hectares of land. These producers are highly vulnerable to the effects of climate change in the region. However, this sector is among those who look to benefit most from digital technology.

In Honduras, for example, small producers receive weather, price and soil quality alerts via text, which has helped them to increase incomes by 12.5%.

While in rural Peru, access to mobile phones has helped to increase real household consumption by 11% between 2004 and 2009, which reduced poverty by 8% and extreme poverty by 5.4%.