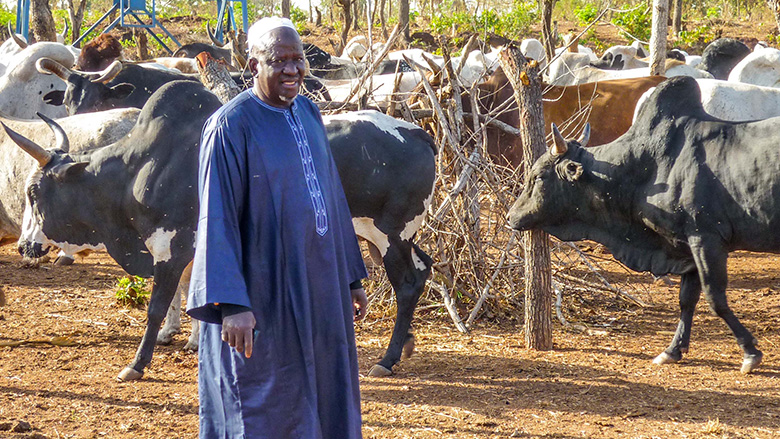 Improvements such as fencing, sheds, and feeders allow livestock traders like Adama Togola to fatten their cattle in favorable conditions and obtain better quality meat.

NIENA, January 14, 2016 — Adama Togola began selling cattle in 1985 as a simple trader. Fourteen years later, after having taken up cattle fattening, he is now a successful businessman that heads up the cattle buyers’ and sellers’ association in his native Niéna region, 70 kilometers outside of Sikasso in southern Mali.

Cattle fattening is a livestock production practice that reduces animal movements thereby fattening cattle more quickly. Larger animals can be sold for more money on the market as they yield more meat.

Mr. Togola remembers the early days, when he used to feed his animals without following any real feeding plan. “I never received training as to how best to feed my herd in order to make a maximum profit. That was a loss, a waste,” he recalled.

" The ACDP and the training sessions it provided helped me develop a feeding program to properly fatten cattle and maximize the profit margin of my business, and it worked! "

President of the Cattle Buyers’ and Sellers’ Association in the Niena region.

In his late sixties, this businessman was one of the early beneficiaries of the Agricultural Competitiveness and Diversification Project (ACDP), which helped him learn and apply new cattle fattening techniques, and build infrastructure suited to his business. “The ACDP and the training sessions it provided helped me develop a feeding program to properly fatten cattle and maximize the profit margin of my business, and it worked!” he exclaimed.

Since 2002, Mr. Togola has been fattening approximately 100 heads of cattle each year, currently securing a selling price of over 600,000 West African francs (CFAF) per head, compared to just CFAF 300,000 prior to the project. He believes that it is a win-win situation for both traders and consumers. With these new techniques, traders have more meat to sell, and consumers are provided a high quality meat for their money.

Prior to the project’s implementation, Mr. Togola was practicing cattle fattening without a cowshed or feeding or water troughs. “I was trying to fatten them on my pastureland. When I heard about the ACDP, I approached project staff to request support to build a fence, a shed, and obtain a feeding trough for my animals,” he explained.

ACDP support allowed Mr. Togola to build a 30 meter by 25 meter enclosure for his pasture land. He put up CFAF 3,600,000 and the project provided financing amounting to over CFAF 10 million. As a result of this improved infrastructure, he is now able to purchase many more heads of cattle when prices are attractive, and gradually fatten these cattle when market prices rise.

Mr. Togola believes that this type of system helps build the confidence of commercial banks in cattle traders. Most actors in the cattle fattening and livestock industry find it difficult to secure a loan from banks as they are not able to meet all the required guarantees. However, local banks are more inclined to provide financing whenever they see that the livestock farmers and traders are heavily invested in their ventures, have the necessary equipment, and put up a small amount of capital.

“Cattle these days are a prized resource. In the near future, the poorest will find it difficult to eat meat on a regular basis because prices are increasing significantly. In Bamako during Ramadan, one kilogram of meat costs more than CFAF 2,000,” noted Yeyande Kasse Sangho, Senior Agribusiness Specialist in charge of the ACDP project at the World Bank Country Office in Mali.

The ACDP, which closed in June 2015, was designed to be a medium-term program aimed at promoting efficient and competitive commercial agriculture capable of providing high-value added products for domestic and foreign markets.