Colombia: Winning the War on Poverty and Inequality Despite the Odds 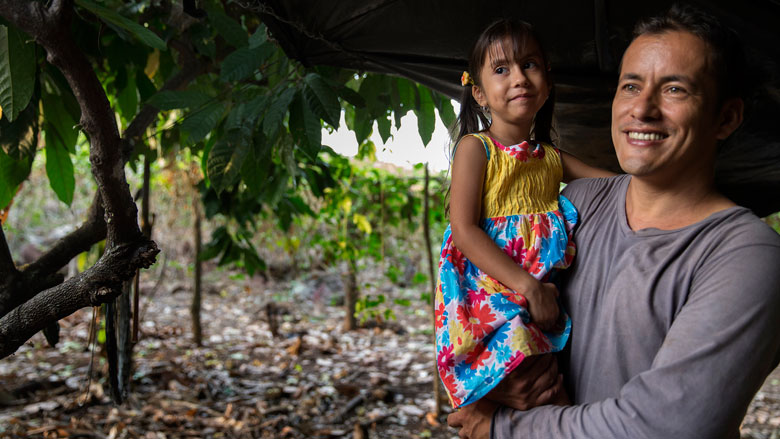 Yamid Duran Ramirez holds his daughter Leyla Duran Vergora after working on his farm where he grows passion fruit, in the township of La Paz, Colombia.

It’s hard to picture, but most Colombians have never lived in a country at peace. The stage of one of the longest armed conflicts in the world, Colombia has put up with this internal struggle for over 50 years, which has claimed thousands of lives and forced millions from their homes.

Despite these odds, Colombia has advanced much on another front – the fight against poverty. Even during conflict, the country has grown more than the Latin American average, and has cut extreme poverty rates by half between 2002 and 2014.  More than 6 million people left poverty and, for the first time ever, more Colombians are considered to be middle class than in poverty.

“The current face of Colombia is completely different and its future, promising,” said Gerardo Corrochano, World Bank Director for Colombia and Mexico. “It is poised to end a conflict that has been an obstacle to its development potential for years.”

Experts agree that there is a great opportunity window for a post-conflict Colombia. A World Bank economic assessment reveals that if the country had been at peace for the past 20 years, the income per capita could have been 50 percent higher than it is today.

Considering that economic growth was responsible for over 70 percent of extreme poverty reduction between 2002 and 2013, this could have an incredible impact.  “Colombia can make history in 2016,” Corrochano said.

“It will require investments in infrastructure and human capital,” explained Corrochano.  “Reaching the highest levels of well-being for all Colombians implies managing peace sustainably, eradicating poverty and sharing prosperity.”

This will not be an easy task. It takes time and there’s plenty to do. Inequalities between regions are still high, for example. “There have been advances, but now is the time to redouble efforts,” he said.

Throughout the conflict, about 6 million people left their homes fearing for their lives. “You’d go into the mountains and you’d worry; you thought you’d be killed,” says Alfonso Mejia, a cattle farmer who has had his land restored. “It used to be bad, really bad.”

“If your land is your primary asset and you have been forced to abandon it, it is going to make you even more vulnerable,” explains Victoria Stanley, World Bank Senior Rural Development Specialist. “Restitution is, then, one way of helping people both restore their lives in their communities and also get that valuable asset back.”

Now, these people not only have their land back, but also their livelihoods.

Many initiatives are already building towards a post-conflict era. The Bank, for instance, supported Colombia with goals related to the protection, formalization and restitution of land rights, particularly to those displaced by decades of conflict. By the end of 2014, 1,852 land restitution cases had been heard by judges.

Women have a major role to play in this endeavor. “From beginning to end, women have been allowed to participate as business owners and managers of their own development,” notes Juana Alicia Ruiz Hernandez, a beneficiary of the land restitution program.

Another outstanding issue is the reparations given to victims. The World Bank is managing a multi-donor fund for post-conflict in Colombia, and the fund’s first step is to improve the government’s operational capacity in order to put the collective reparations program into practice. This will benefit vulnerable groups of people who have been victims of the conflict, such as Afro-Colombian or indigenous communities.

Efforts have also been made in helping youth and vulnerable groups to move forward. A peace and development project has generated social, economic and environmental assets for around 90,000 beneficiaries. Over 600 organizations have been boosted by getting a bigger say in municipal life, which has also strengthened the State at the local level.

For example, a group of internally displaced women in Cucuta started a clothes-making business with help from the project. Ana Lida Gamboa, one of these women, says it helped her improve her administrative and communication skills. “We´re proud of what we have achieved and of having realized our dream,” she added.

Other initiatives include helping youth escape the spiral of violence and promote peace through arts and music or sports. Around 1,800 children benefit from initiatives run by Fútbol con corazón (“Soccer with Heart”). Through soccer, these children work on violence prevention skills, gender equality and staying in school.

Similarly, rebuilding the social fabric and unity of the community is taught as a subject in schools. In Antioquia, within the context of a World Bank-supported education project, children from a secondary school work on gathering information from elders on the history of their home town La Ceja, which suffered a great deal from the armed conflict.

“People think that because there has been an armed conflict here we are also like that. No, we’re not!,” said Angie, a student at the school. “This is what we want, to change the face of our town.”