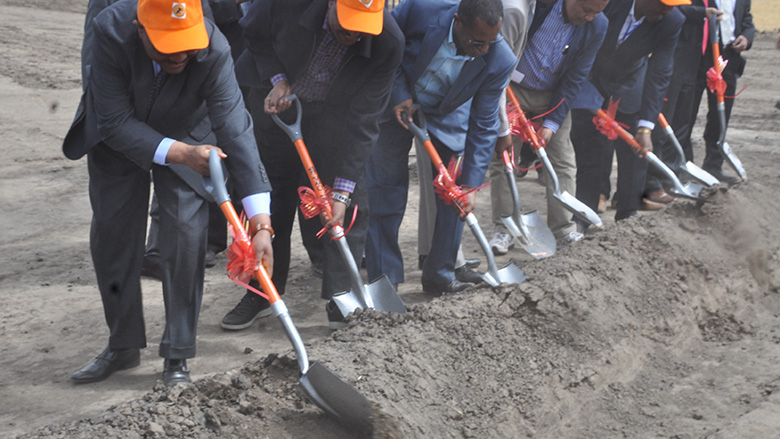 ADDIS ABABA, January 6, 2016 – More than 20,000 vehicles per day travel the 850 kilometer route from Addis Ababa to the port of Djibouti, Ethiopia’s main trade outlet, making it the most congested and accident-prone road in the country.

“I use this road at least once a week, on every trip I see several horrific accidents on this route,” said Mohammed Abdi, a truck driver. “People lose their lives, and millions in properties are lost. We also lose valuable time on this road as a results of the accidents and the bad condition of the roads.”

In an effort to alleviate some of these traffic problems, the government recently broke ground on the new Modjo-Hawassa Expressway, 203km of road stretching from Modjo in central Ethiopia, south to Hawassa city. When complete, the expressway will accommodate more than 4,000 vehicles per day, and will reduce travel time between the two cities from four hours to two hours. The expressway is supported in part by the World Bank Group (WBG) through the $370 million Expressway Development Support Project (EDSP), which will help to build 57kms of the road.


“We have been supporting road development in Ethiopia since 1950, when it became the first African country to receive World Bank financing,” said Carolyn Turk, World Bank country director for Ethiopia. “There has been much success since then; today, 70% of the roads are now in good or fair condition, facilitating trade and contributing to the overall economic development of the country. The new expressway is one more step in the advancement of the system.”

The EDSP also marks a historic moment in the WBG’s partnership with Ethiopia, as it is the first project co-financed with China EXIM Bank and South Korea EXIM Bank. The project brings together traditional and non-traditional development partners to work on a single project, with standardized design, safeguards, and joint-supervision. The partnership also promotes cost sharing and recovery of operational and maintenance costs, as well as some investment costs.

“EDSP is a perfect example of harmonized delivery of projects between, Africa Development Bank, China EXIM Bank, South Korea EXIM Bank and the World Bank, and has laid the foundation to scale up the cooperation at the continental level,” Turk said.

As the second toll road in the country, the project will help modernize the roads network by connecting it to the Addis-Adama Expressway, which opened September 2014. It will also provide a high-quality road for drivers, reduce traffic congestion, lower emissions and decrease the potential for road accidents. Additionally, the expressway opens up areas with a high potential for tourism, light manufacturing, agro-processing and producing key agricultural products for export, increasing trade opportunities and further contributing to the country’s economic transformation.


The expressway will also form part of the regional Trans-East-African Highway, connecting Ethiopia to Kenya and southern Africa. The route is also part of the 10,000km transcontinental Cairo-Cape Town Highway.