By some measures, 40% of US workers will be in non-standard jobs by the year 2020. These could be a series of part time roles, or as a freelance contractor working via a technology platform such as Uber. In the developing world, these forms of employment are also increasing at a time when the push to move employment from the informal to the formal sector is gathering pace. The great question is therefore how do you regulate these working arrangements? How do you find the right balance between protecting workers and allowing companies the flexibility to make HR decisions?

The fact is these types of non-standard employment contract are becoming more prevalent, rather than less. In 2012, 11.8% of the workers in OECD countries had temporary contracts. This rises to 26.9 % in Poland, 23.6% in Spain, 20.7% in Portugal, and 13.7% in Japan. These temporary contracts typically come with less protection, fewer benefits and pecuniary discounts. Temporary workers in the EU earn on average 14% less than workers with open-ended contracts.

This atomization of work is a fact of life for many workers, whether they are in the developing or the developed world. “It is absolutely a trend that we need to acknowledge,” says Arup Banerji, Senior Director of the Social Protection and Labor Global Practice at the World Bank in Washington, DC. “Anything that can be made piecemeal and opened up will be. Work is not being done in fixed units anymore. It is being shared and this allows more and more people to enter the work place. But how can these workers be protected?”

A new World Bank report shows how countries can reform labor regulations to protect their workers and maintain job creation. We talk to David Robalino, one of the report authors, and Sandra Polaski, the Deputy Director General from the International Labour Organization, to find out how this impacts young workers.

Without changes to regulations, this army of freelancers, subcontractors and piece workers will be left out of the traditional social protection systems such as unemployment benefits, sick pay and pensions. One of the key recommendations from a new report recently issued by the World Bank, in conjunction with the International Labor Organization (ILO), is that countries need to extend their social and labor protections to people who are working part time or in serial part time or temporary jobs.

The key to making this happen could be to use the very same technology that is being used to drive the gig economy. “There is huge scope for governments to use technology for enforcing the new regulations,” says Sandra Polaski, Deputy-Director General of policy for the ILO. “Most transactions on the gig economy are done via the internet and as such they can be tracked. These companies do need to contribute to insurance and other social contributions.”

While the gig economy can be beneficial for some firms and some workers, it can be detrimental to society and the economy as a whole. Peter Bakvis, the Washington Director of the International Trade Union Confederation (ITUC), notes that since the global financial crisis of 2008-2009, 30 million people have lost their jobs and wages have not kept up with productivity growth. “This is not due to over-regulation,” he says. “There has been a weakening of labor market standards.” He points out that increasingly complex supply chains and sub-contracting make it hard to enforce protections. But without doing so we will not be able to combat the increasing levels of inequality. “It has gone too far in some cases and we need to work with countries to establish the right levels of regulations.”

Polaski is skeptical about whether the gig economy really is a new way of working. Rather, many people who are working this way are actually employees in disguise. As such the employers are not paying the true costs for employing them. “The gig economy is a way of externalizing costs,” she says. “In other words it allows some sectors of society not to pay the true costs for making profits.”

The best way to ensure that society as a whole does not pay the costs of the gig economy is to extend labor market regulations to everyone. “There should be a guiding principle that the architecture of labor market regulations should aim for equal treatment of all workers whatever their type of contracts,” says Carmen Pages-Serra, Chief of Labor Markets at the Inter-American Development Bank. “But that is easier said than done. Much of the existing legislation is still based on people having a salaried job. But if contractors are actually contented entrepreneurs, we must be very careful not to crush this movement by over-regulation.” The key to find the right balance is to ensure that there is a social dialogue between all the relevant parties. 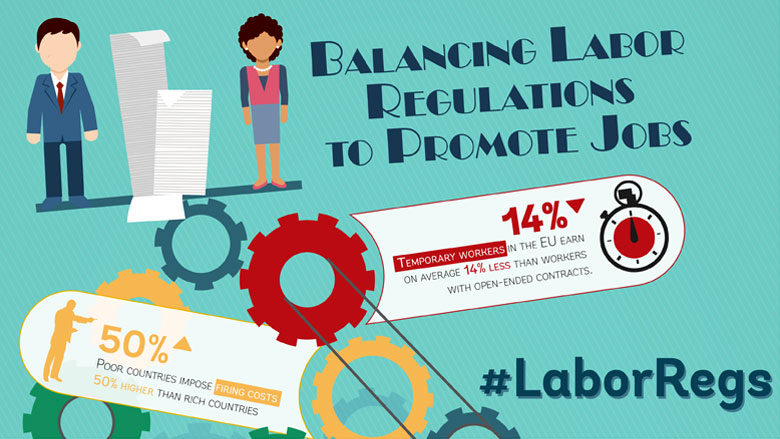