Next Steps for Climate Action in Cities after COP21

For six months each year, the city of Can Tho in Vietnam floods – on average – twice a day.  As water spills into houses and shops, business grinds to a halt and children pick their way through dangerously flooded streets to get to school.

During the past ten years, the floods have gotten worse, with maximum sea levels rising 8 – 10 inches. “The water stays up for about four hours each time,” says Cao Van Buon, a business owner.

As seasonal and extreme weather events become more severe, cities like Can Tho face an enormous challenge.   Many of the world’s largest cities are located on coasts, deltas, or riverbanks; globally, 60 percent of the world’s cities are at risk from rising sea levels and storm surges. With this in mind, more than 400 mayors from around the world met at the UN’s Paris climate conference determined to take action.

“There was a clear signal from Paris that municipal leaders are not only deeply committed to making sure their cities adapt to the impacts of climate change,  but are also leading the way to lower emissions through low-carbon development,” said Ede Ijjasz-Vasquez, Senior Director for the World Bank’s Social, Urban, Rural and Resilience Global Practice.  “With COP21 behind us, it’s time to get on with the real work of the post-COP agenda.”

Last year, the World Bank provided over $3 billion in urban climate finance and technical assistance to help developing countries build climate-smart cities; this figure is expected to grow proportionately as the Bank moves to increase its climate finance by a third over the next five years.

As urban populations grow faster than ever – with 90 percent of that growth happening in developing countries – the World Bank and its partners are providing advice, tools, and funding to address the urban climate challenge. Here’s a look at what the Bank is doing:

Cities are particularly vulnerable to climate change, because that’s where people and assets are concentrated. The World Bank has helped cities understand and build resilience for more than a decade, promoting early warning systems, stronger infrastructure, flood management, and disaster preparedness programs. In Sri Lanka, World Bank loans are improving Colombo’s resilience and ability to prevent floods. In Bogota, Colombia, schools have been upgraded to meet resilient building codes and people living in high-risk areas susceptible to landslides and flash floods have resettled in safer territory.

“Adaptation is about managing risk,” said Niels B. Holm-Nielsen, Global Lead for Resilience and Disaster Risk Management at the World Bank. “There is a lot for cities to consider – improving water circulation to avoid flooding, territorial planning to guide more resilient urban growth and, most importantly, how to keep things going in the face of major storm or natural disaster.”

Among many tools offered by the World Bank is a new program called “City Strength,” which evaluates resilience on a holistic basis – looking at different sectors like transport, energy, health, waste management, and information and communications technology – bringing the findings together to identify critical gaps or areas of weakness.

" There was a clear signal from Paris that municipal leaders are not only deeply committed to making sure their cities adapt to the impacts of climate change, but are also leading the way to lower emissions through low-carbon development. With COP21 behind us, it’s time to get on with the real work of the post-COP agenda. "

By the end of the Paris climate talks, more than 450 cities with a combined population of nearly one billion people had pledged to reduce emissions by more than 50% over 15 years. A recent analysis by the World Bank found that only 20% of the world’s largest cities have the basic analytics necessary for low-carbon urban planning.

“This expanded engagement on the part of the mayors, coupled with unprecedented urban population growth, presents a unique opportunity to set cities on a low-carbon development path,” said Paul Kriss, World Bank Global Lead for Sustainable City Infrastructure and Services.

The Bank is also pioneering the use of TRACE (Tool for Rapid Assessment of City Energy), a land use, transport and energy model that lets users project different scenarios.  When TRACE was deployed in Romania, city officials found that more compact urban development in the Bucharest region could decrease local greenhouse gas emission by 39%.

“Cities can’t do it alone,” said Roland White, the World Bank’s Global Lead for City Management, Finance and Governance. “National governments will have to help with major investments, particularly in climate and green infrastructure. And the international community has an important technical and financial role to play.”

Most cities in the developing world don’t have access to sufficient, long-term financing and credit. Only 4% of the 500 largest cities are credit worthy in the international markets and only 20 % have a domestic credit rating. National governments need to create the policy and legal environments that help cities more easily access private financing to invest in climate infrastructure, and cities need to strengthen their financial performance to attract investors.

The World Bank is working with a number of countries to strengthen their regulatory frameworks for municipal borrowing, while its City Creditworthiness Academy (CCA) works to strengthen municipal performance and prepare them to tap domestic and regional capital markets. The CCA has trained over 500 municipal officials from 185 cities in 20 countries.

Looking to the Post-COP future

“The future of sustainable development lies in creating a mix of financial and technical solutions that can match the complexity of building low carbon, resilient cities,” said Ijjasz-Vasquez. “These engagements offer combinations of physical risk reduction, financial risk transfer and management, support systems to improve decision making for risk management, and early infrastructure and regulatory improvements that will shape a city’s future over 10 to 15-year horizons.  Together with our development partners, the World Bank will continue to finance public investment in low-carbon, resilient cities, but we are also helping municipal governments develop a wider array of financial tools to reduce their vulnerability to natural disasters.” 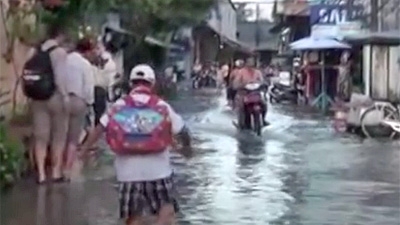