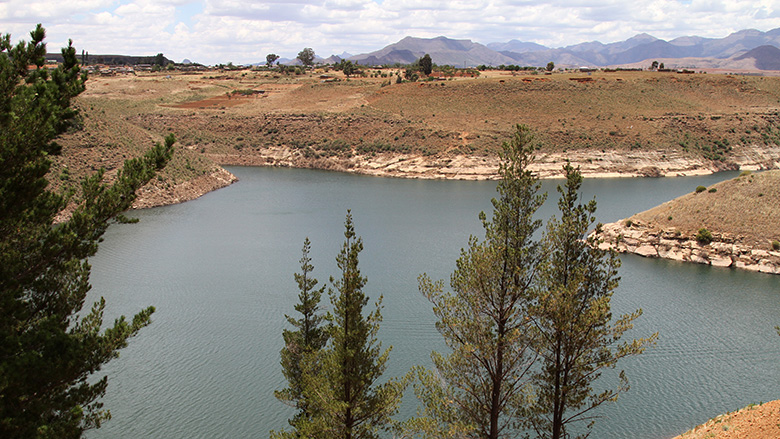 The new 83-meter high Metolong Dam is now open in Lesotho, providing water to two-thirds of the country’s population.

METOLONG, December 18, 2015 – Scores of young men lined up forming a human chain atop a hill in rural Lesotho, swaying in unison with sticks raised up in the air and their right elbows stacked side-by- side as they sang folk songs and performed the traditional mohobelo dance. The festivities marked the unveiling of the Metolong Dam by the King Letsei III of Lesotho. The dam will provide water to two-thirds of the country’s population who have been facing acute water shortage until now.

“It’s good we are going to have water in our village,” said Mamorwesi Seipubi, a 56-year old woman, who had walked for an hour and half to witness the ceremony. “We have been suffering.”

Hundreds of Basotho from the surrounding communities, government Ministers and officials, diplomats and international development partners gathered for the official opening of the Metolong Dam and Water Supply Program [MDWSP]. During the ceremony, the Basotho people celebrated with school choirs from the surrounding villages proudly belted songs about water conservation and their duty to preserve the environment.

The enclaved high-altitude Kingdom which is completely encircled by South Africa has a population of just over two million people and spans an area of about 30,355 square kilometers, crisscrossed by a network of rivers and mountains. But with most previous water projects supplying water to South Africa, Lesotho’s own lowlands suffered chronic water shortage. MDWSP is the first fast-track program to supply water within the country to the lowlands.

The construction of the 83-meter high Metolong dam was started in 2013 and the dam now provides treated bulk water to communities in five areas including the capital of Maseru and surrounding towns of Teyateyaneng, Morija, Mazenod and Roma.

“The completion of the Metolong Dam and Water Supply Program marks a major milestone in the economic and social development of Lesotho because over 500,000 people are reaping benefit from this program,” said King Letsei III.

Adding that 3,000 Basotho were employed on the project during the construction of the dam, King Letsei III said that the diverse nature of the project has facilitated the acquisition of skills which will stand the country in good stead to gain employment on future project within the country and abroad.

Through the Environmental and Social management component of the project, the World Bank along with the Metolong Authority and other development partners identified ways to benefit the community and have a lasting impact on the lives of the people. Three hundred local Basotho affected by the dam construction and living in the project site were provided with capacity building and income generating skills along with compensation. The project is also electrifying 75 villages without electricity until now and providing healthcare and HIV/AIDS community support programs to 15,000 local members.

The MDWSP, which cost $450 million, was funded by multiple partners including the World Bank, the African Renaissance and International Cooperation Fund of the Republic of South Africa, the European Investment Bank, the Saudi Development Fund, OPEC Fund, Kuwait Fund, Arab Bank for Economic Development in Africa, Abu Dhabi Fund for Development, Millennium Challenge Corporation, and the Government of Lesotho. Throughout the last decade, the World Bank Group has invested $8.8 billion in hydro projects and provided technical assistance in 50 countries, thereby contributing to reducing poverty and boosting shared prosperity.