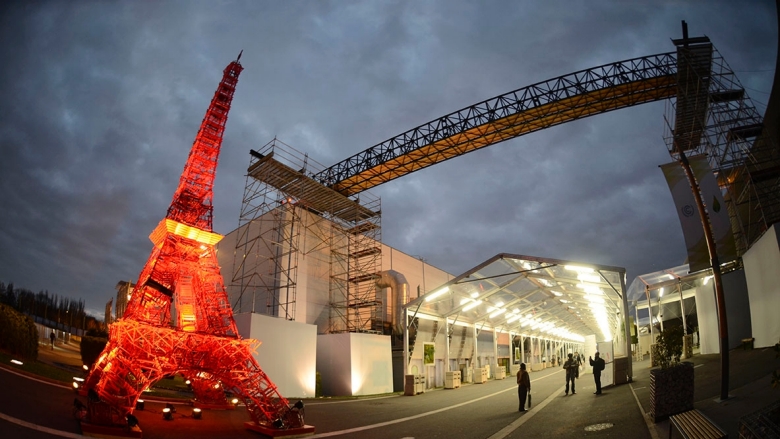 It took over 2 months and more than 3,000 workers to build COP 21 conference center at Le Bourget, near Paris. In picture, a replica of the Eiffel tower made out of recycled chairs.

With the passing of a global climate change agreement on December 12, the World Bank Group is moving quickly to help countries achieve the pledges they have made in Paris.

More than 180 countries have submitted Intended Nationally Determined Contributions – or INDCs – to the UN Framework Convention on Climate Change (UNFCCC) in the run-up to or during its 21st Conference of Parties (COP21) in Paris.  The INDCs spell out what the countries plan to do to reduce emissions and adapt to climate change.

The World Bank Group works with more than 130 of those countries.

“We welcome the historic agreement that has just been reached in Paris,” said World Bank Group President Jim Yong Kim. “The world has come together to forge a deal that finally reflects the aspiration, and the seriousness, to preserve our planet for future generations. The World Bank Group is ready to help immediately and will do its utmost to realize this vision.”

The World Bank Group is now finalizing a Climate Change Action Plan that will help to integrate climate considerations across the institution’s operations, and make it easier to deliver comprehensive packages of financing, technical assistance and knowledge to help countries adapt to climate change and transition to a low carbon economy.

The recent Shock Waves report demonstrates that ending poverty and addressing climate change cannot be separated – that if left unchecked, climate change impacts could push more than 100 million people into poverty over the next 15 years. To prevent this, the report calls for an immediate implementation of “climate-smart” development and measures to adapt to climate impacts.

A large proportion of the Bank Group’s work is already dedicated to such climate-smart development and adaptation, including investments and activities in renewable energy and energy efficiency, natural resources management, low-carbon urban development, resilient agriculture, and sustainable water management.

Just prior to the Paris talks, the World Bank announced the Africa Climate Business Plan, which calls for $16 billion in funding to help African people and countries adapt to climate change and build up the continent’s resilience to climate shocks. Of that, $5.7 billion is expected to come from the International Development Association (IDA), the arm of the World Bank Group that supports the poorest countries. 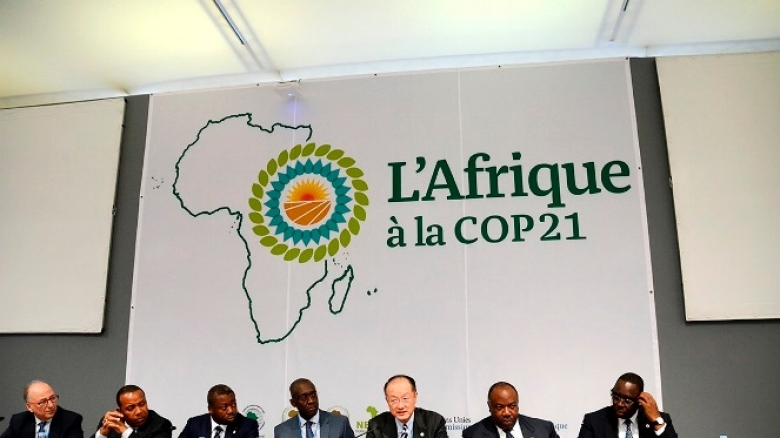 Photo: World Bank
" The world has come together to forge a deal that finally reflects the aspiration, and the seriousness, to preserve our planet for future generations. The World Bank Group is ready to help immediately and will do its utmost to realize this vision. "

The Bank Group is using the INDCs as a basis of discussion with countries about their national climate action needs, and is already at work on initiatives that will help to achieve those commitments.

In Indonesia, among the key focus areas of the World Bank’s new Country Partnership Framework are renewable energy, landscapes and forests, and disaster risk reduction.

In Morocco, the Bank Group is supporting the government’s National Irrigation Saving Program, with a new US$150 million commitment to help poor and vulnerable farmers with more efficient irrigation technologies so they can cope with increasing variability in water supplies.

Cities are where the emissions are, responsible for more than 70 percent of energy consumption and energy-related greenhouse gas emissions. In 2015, World Bank provided over $3 billion in finance and technical assistance to help clients build climate-smart cities. In Brazil, the World Bank is supporting sustainable urban transport in Rio de Janeiro through investment loans, development policy loans and technical assistance

“Beyond Paris, countries are looking for reliable partners to turn commitments into financing, and financing into action” said John Roome, Senior Director for Climate Change at the World Bank Group.  “The Bank Group is already on the ground and delivering for these countries.”

From Billions to Trillions

To meet the growing demand for such work, the World Bank Group has committed to increasing the share of its portfolio devoted to climate finance, from the current 21 percent, to 28 percent, over the next five years.  When including financing generated from other partners and associated private sector financing, such financing would amount to a potential $29 billion a year by 2020.

At the same time, the Bank Group recognizes that public funds will be most effective if they catalyze significant private investment.  The finance required to transition to a low carbon and resilient economy is counted in the trillions, not billions. Given that, World Bank climate initiatives are designed to create the stable policy environments, strong institutions and project pipelines needed to increase investment by an order of magnitude.

In 2015, the International Finance Corporation (IFC), the World Bank Group’s private sector arm, made $2.3 billion in climate-related investments, covering 103 projects in 31 countries, and mobilizing an additional $2.2 billion from private investors.

The Bank Group is also exploring ways to create incentives for large scale cuts in emissions by widening and deepening carbon markets. Since starting the world’s first carbon fund to support over a decade ago, the Bank Group has raised $4.36 billion through 18 carbon funds and initiatives, supporting 145 active projects in over 75 client countries.