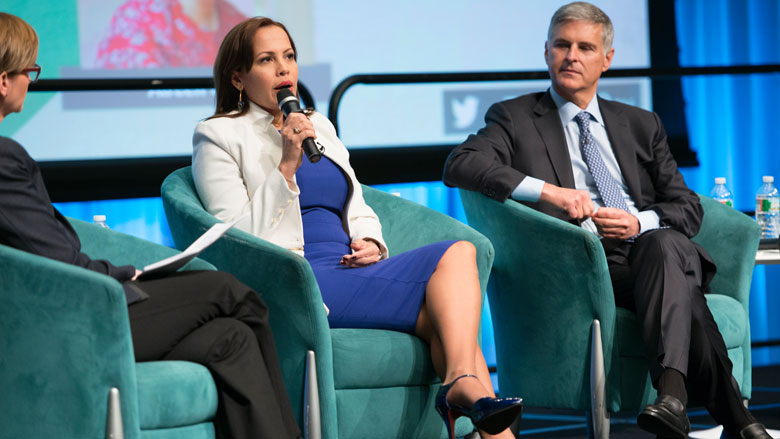 WASHINGTON, December 10, 2015—If “tourism” comes up in a word association game and the things that come to mind are flip-flops, sunglasses, and cheap cameras, then you did not attend the World Bank Group’s Tourism Forum 2015: “Driving Development through Tourism.”

At the forum, the key words were “jobs,” “inclusive growth,” and “poverty alleviation.”

The gathering of public and private sector officials, travel and tourism specialists, and development economists highlighted the enormous and growing economic importance of what is often thought of as a niche economic sector.

In fact, travel and tourism accounts for about 10 percent of global GDP, generates one out of eleven jobs worldwide (about 277 million total), and is an increasingly vital component of developing economies.

“In Kenya, tourism produces 14 percent of national economic output and 12 percent of total employment,” World Bank Group President Jim Yong Kim said in remarks opening the forum. “In 2013, tourists spent $413 billion in developing countries, about three times the amount of official development assistance that year. In 2015, for the first time in history, more people will travel to the developing world than to the developed world—about 550 million people overall.”

The wide ranging topics covered over two days of panel discussions included risks and vulnerabilities associated with tourism, such as the threat of terrorism and the misperception that tourism produces only low-quality jobs, as well as benefits and opportunities, including the spin-off effects of tourism and the ability of tourism to grow in places with few other employment opportunities.

Step one in the public and private efforts to develop tourism as a vital economic sector involves conveying its economic potential beyond industry specialists.

“Very few people are aware that 10 percent of global GDP is in tourism,” said Christopher Nassetta, President and Chief Executive Officer of Hilton Worldwide. “There is not a broad awareness of the current economic impact travel and tourism is having, let alone what it could do.”

" Tourism has a wonderful potential to create jobs, and jobs are the path out of poverty for the vast majority of the people we’re dealing with "

Tourism is doubly important to the World Bank Group: it is the one business sector in which developing countries, with their rich cultural and natural assets, have a front-end advantage over developed countries, as reflected by the increasing tourist travel to developing regions; and it is a labor intensive field. According to Nassetta, for every 30 additional tourists there is one new job created in a tourist business. This dynamic is expected to generate 75 million new jobs over the next 10 to 15 years.

“Tourism has a wonderful potential to create jobs, and jobs are the path out of poverty for the vast majority of the people we’re dealing with,” said John Perrottet, a senior tourism industry specialist with the World Bank Group’s Trade & Competitiveness Global Practice (T&C).

By way of increasing awareness of tourism’s economic importance, the forum brought forth a number of key facts:

“Developing countries have a distinct advantage in tourism, possessing as they do unique assets that can be leveraged,” said T&C Senior Director Anabel Gonzalez. Key questions for the forum included “How can developing countries capture their share of the tourism market, and where does tourism growth come from?”

Contrary to the perception that tourism produces low-paying, dead-end jobs, Nassetta noted that he rose to the head of a global hospitality company having begun his professional career cleaning bathrooms.

Of particular importance in developing regions are natural and cultural assets. John Scanlon, Secretary General of CITES, the Convention on International Trade in Endangered Species of Wild Fauna and Flora, pointed up the risk posed to the economies of Sub-Saharan Africa by the illegal ivory trade. The economic potential of nature-based tourism can be part of the response to that threat, he noted, citing the recovery of the African white rhino due largely to preservation efforts on private reserves. Losses to poachers of other iconic species, such as the African elephant, have risen to crisis levels.

“The people living with wildlife need to benefit from the protection of wildlife,” Scanlon said. “These countries have wildlife assets, that’s the good news. The bad news is that these assets are under threat.”

Creativity emerged as a key theme in the forum.

Lynn Cutter, Executive Vice President of National Geographic Travel, said that in Costa Rica, managers of a lodge hired a top local poacher as a guide, “because he knew the jungle better than anyone.” The poacher, in turn, hired other poachers, creating a legal alternative to earn a living through their expertise in area wildlife.

Sandra Howard, Colombia’s Vice Minister for Tourism, said the government made a conscious decision to openly discuss its long history of civil conflict and violence relating to drug cartels as part of its tourism strategy. It began by convincing Colombians that it was safe to travel around their own country and expanded to drawing international tourists. It proved to be a turning point in an extraordinary economic transformation.

“We addressed the elephant in the room,” Howard said.

In Mexico, a strong commitment by the government launched development of a major tourism hub in Cancun from almost nothing 40 years ago, beginning with roads and airports and extending to hotels and golf courses.

Flip flops were not entirely out of the discussion. Tourists flock to the Philippines to view the periodic eruptions of Mount Mayon, famous for its near perfectly symmetrical cone shape.

“The beauty of Mount Mayon is that it never really blows up,” said Secretary of Tourism Ramon Jimenez. “It cools down, the lava slows down, and people relax and go to the beach.”