In the midst of growing unemployment in the capital Honiara, a project is helping provide training and job opportunities for thousands of people, where half are women and youth.

Honiara, Solomon Islands – It’s after 7am as Alison Lenga Ila and her five-year-old son Junior join the morning rush of school children and office workers.

The 28-year-old works as an office cleaner, her first formal job. After dropping out at the end of primary school, Alison searched for work for many years. She had occasional work—cleaning houses and a stint as a street vendor selling food—yet all her attempts led to very little, leaving her frustrated and homebound.

She’s excited about holding down her first professional job, yet behind the confident façade, Alison is well aware of what having a job means to her family as she is the sole breadwinner in a family of three.

“Now that I have a regular income, I make sure I manage it well,” said Alison. “I save some of my pay for my son’s school fees, I put some of it into our staff savings club, and what’s left over I use for food and transport.”

Alison says she would have still been at home and jobless had it not been for the Rapid Employment Project, a World Bank-supported initiative that emerged from the government’s concern over the lack of jobs for Honiara’s growing urban population.

Starting in 2010, the Rapid Employment Project sought to improve living standards for those in vulnerable urban communities by creating short-term jobs through the building and maintenance of community infrastructure.

“When the women in my community asked me to go with them to join the project, I thought it was a great idea, but I wasn’t sure what to expect,” said Alison.

Through a week-long training program, Alison and the other women in her community learned the basic work skills that are expected by employers and personal financial management; a training that left a big impression on her.

After completing their training, Alison and her group got the call to start a 52-day work placement. They focused on providing civic services – such as street cleaning, building footpaths, fixing and repairing roads and bridges. Alison’s group was tasked with cleaning the street along Honiara’s Chinatown area.

“What we earned was small, but what is more important is what you do with that money,” Alison said. “I used my pay to buy stocks of canned tuna, noodles and sugar to sell to families in my community. This kept me going even after I completed the street cleaning.”

Six months later, Alison spotted a job vacancy ad for an office cleaner. She visited the Rapid Employment Project and asked their help to polish her CV. A few weeks later she got a call back. After one job interview, she was employed.

" I used my pay to buy stocks of canned tuna, noodles and sugar to sell to families in my community. This kept me going even after I completed the street cleaning. "

In partnership with the Ministry of Infrastructure Development and the Honiara City Council, the project has helped 11,000 people since it began, half of whom are women and youth. Through 600,000 days of short-term labor, over US$ 2 million has been paid in wages to many of Honiara’s previously long-term unemployed.

Beyond the statistics, however, the project manager Salvador Jiao says the project’s approach is about finding a good fit for both the individuals and the community.

“This project is about finding the best options for generating labor, and at the same time meet the critical infrastructure needs of vulnerable communities,” Jiao said.

At the Koa Hill community on the banks of the Mataniko River, the construction of a footpath by the project enabled community members to quickly escape from flash floods in April 2014.

Downstream, raging flood waters and debris damaged the Mataniko Bridge, the city’s main thoroughfare, splitting the city in half as emergency workers raced to repair it. When floodwaters receded, the death toll was at 22 with damages in excess of US$100 million.

In August 2015, the Rapid Employment Project was extended for a further 18 months with a new focus on disaster recovery. As part of the project, two kilometers of climate resilient roads will be built. Another four kilometers will be included for maintenance and spot improvements.

“It’s a great opportunity for the project to continue to help others like Alison and to assist communities like Koa Hill,” said Jiao. 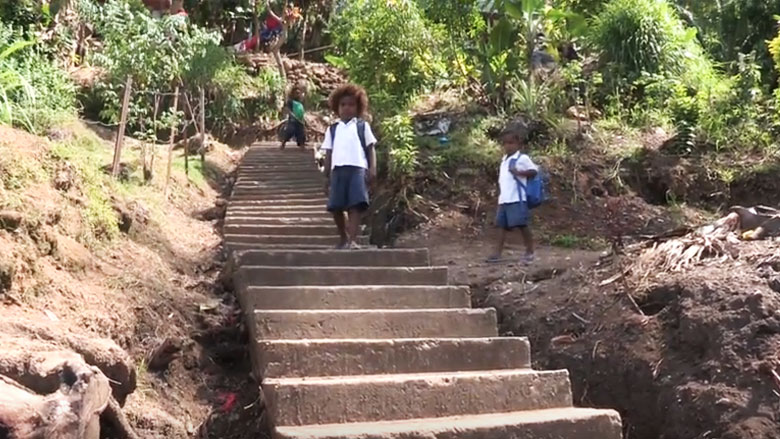