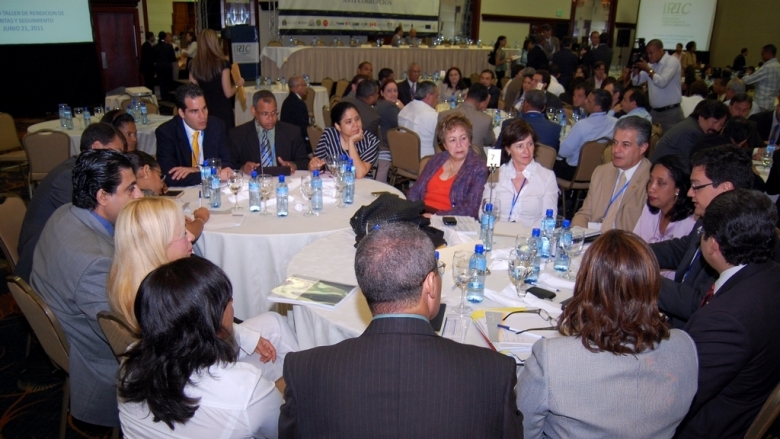 Santo Domingo, Dominican Republic. On a steamy October day in 2010, over 350 representatives  from government, civil society, international organizations, and the private sector crowded into a meeting hall.

After weeks of heated negotiations following a presidential decree, these representatives worked tirelessly in 10 working groups, from health and education, to infrastructure, financial management, and access to information. Together they formed the Anti-Corruption Participatory Initiative (IPAC in Spanish). This was their moment to present 30 recommendations for meaningful change, to the President and to the public.

Getting to this point was not an easy feat. For almost a century, the Dominican Republic (DR) faced formidable governance and corruption challenges, including budgetary leakages, procurement bribery and a weak rule of law. In contrast, voice and accountability have been growing stronger, enabling civil society to thrive. Following the limited success of top-down approaches to combat corruption and foster accountability, a credible solution – one that could actually deliver results – was required, bringing diverse stakeholders to the table.

Following an open and participatory process, IPAC’s recommendations were refined and adopted by the government.  With support from the World Bank and other donors, a Citizen Observatory for Implementation (OCI-IPAC) comprising 14 civil society organizations was created to independently monitor and publicly report on their progress.

The results were significant.  In a revealing example, under pressure from the IPAC health sector working group, the President issued a Decree to centralize the procurement of medicines in a single government entity (PROMESE-CAL).

By buying in bulk and requiring competitive tenders, the sector is now saving about 65% of related costs, according to the National Pharmaceutical Management Unit (UNGM). Despite opposition from some decentralized agencies that preferred to control their own medical procurement, PROMESE-CAL was able to garner widespread support from the President, the central government, and even some pharmaceutical companies, which were willing to accept lower prices in exchange for more efficient payment processes.

Most importantly, the supportive momentum they built through civil society made the call for reform impossible to ignore.  Considering that an estimated 80-90 percent of the medicines in the DR are purchased with out-of-pocket expenses, these reforms helped reduce one of the greatest costs burdening low-income households.

The impact of multi-stakeholder coalitions

Applying this approach, IPAC achieved significant results across different sectors, from the introduction of a Supervisory Body to enforce the Access to Information Law, to the issuing of a Decree establishing the Treasury Single Account, to the improvement of public procurement processes, and the establishment of clearer controls over government payments.

Through such measures, the government became more accountable to its citizens, to more effectively allocate public funds for better service delivery.

The Government also became more open, publishing a reader-friendly version of its budget online, and making recruitment for the civil service more standardized and competitive. The Government now regularly reports back to citizens on the budget, while civil society and the private sector provide feedback to improve policies and budget allocations.

Despite progress, some working groups were less successful than others, and overall, many challenges still remain to tackle corruption in the DR. For example, the working groups for Public Works and Water lacked the required combination of consensus and initiative to achieve needed reforms. Other working groups, such as Education, used IPAC’s methodology to continue advancing reform agendas in the following years. Challenges that remain point to the need for greater attention to continue multi-stakeholder efforts to sustain and continue advancements against corruption.

IPAC’s achievements were a consequence of several factors. First, the tacit support at the top, by the Presidency and Economy Minister, and in the middle, from key government reform-champions, was critical to enable IPAC’s multi-stakeholder coalition, bringing legitimacy to the process.

Second, IPAC worked as a “force multiplier,” bringing together reform-minded stakeholders through participatory mechanisms that enabled consensus building to both implement and monitor reforms.

Third, IPAC benefited from “quick wins,” vividly showing citizens that it was possible to overcome corruption and accelerate reforms, with concrete benefits on the quality of services and processes. Finally, civil society engagement through a safe space such as the Observatory strengthened the legitimacy of the process, increasing trust between civil society and the administration for constructive engagement. Building momentum to rally public support and raise the cost of opposition from vested interests, IPAC was able to achieve results which few considered possible, in only 2 years and with a very limited investment.

You can read more on this story through the article: A Collective Action Approach against Corruption: The Case of the Dominican Republic, by Daniel Kaufmann, Andrea Gallina, and Roby Senderowitsch, published by the World Bank and the Global Partnership for Social Accountability (GPSA).