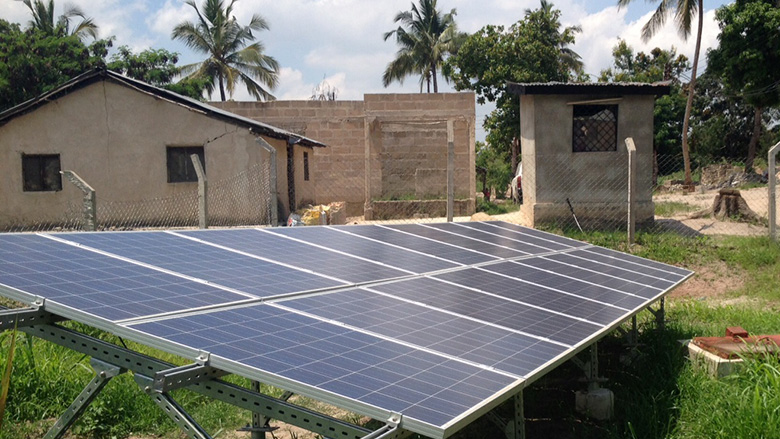 DAR ES SALAAM, December 7, 2015 – Jackson Mutazamba is upbeat as he outlines the future of rural water supply in Tanzania.

“In five years, we expect to go full solar for all non-gravity rural water schemes,” said Mutazamba, assistant director of operational planning in the Ministry of Water.  “Things are changing, new technologies are coming up. You can’t resist good technology that offers you cheaper costs for what you need.”

Two years ago, neither Mutazamba nor his colleagues in the Rural Water Supply Division of the Ministry of Water would have this kind of enthusiasm for solar power as a source of energy for public water supply, despite the fact that Tanzania has abundant sunlight.

“There was a general lack of awareness of the technology and many of us were not up to date with developments in solar pumping technology that had greatly reduced costs and increased pump performance,” he said. “Many of our engineers didn’t have this in mind when designing new water systems.”

While the rural component of a water program for Tanzania, funded by the World Bank and several other development partners, recently registered 45,255 new rural water points – the lack of sustainability continues to be a problem for the program.

“The government normally covers the capital costs of constructing a water project, but once completed, the community is responsible for the operation and maintenance (O&M) of the water scheme and the related costs,” said Mutazamba. “In many cases, schemes have been abandoned as communities are unable to afford the diesel required for operating the water system, from money raised from selling water.”

A 2013 nationwide Water Point Mapping exercise showed that out of 74,250 mapped water points, 28,496 (38%) were not functioning.  While several factors contributed to the lack of functionality, it was found that those pumping systems with affordable O&M costs had improved chances of sustainability.

Engineer Mutazamba is the first to disclose he was not always in support of solar-powered water supply.  Since 2014, a World Bank Technical Assistance Program for Sustainable Rural Water Supply has been working to build capacities and awareness of solar water pumping. Mutazamba and a few members of his team became early champions, assuming the mantle of advocating and advancing solar power to the top of the county’s water supply agenda where it currently sits.

“After attending a workshop jointly organized with the water and sanitation program on the use of solar power and a subsequent solar water pumping learning visit in Uganda, I knew we had to move forward,” Mutazamba said. “The two experiences made me appreciate that technological improvements over the last 10 years had made it possible to pump 20 cubic meters per hour from a depth of 220m, and at the same time save more than 40% on O&M costs.”

The recent financial viability of solar schemes is credited to the fall in the price of solar photovoltaic (PV) modules which since 2009 has dropped 80%, making the life cycle cost of the solar power several times cheaper than diesel.  Compared to the diesel-powered, solar pumping systems benefit from minimal replacement, maintenance and operation costs, leading to reduced costs to water consumers. Replacement of some water schemes in the country, from diesel to solar, have already registered up to 50% reduction in the price of water from Sh50 to Sh25 per bucket.

In Kidotoni village, Kilimanjaro region, Matilda Ngianaeli, 52, is enjoying access to a newly water scheme that is solar powered.

“We used to draw water from a stream in Makuyuni which is a long distance from here and you needed to have the stamina to take on that journey,” Ngianaeli said. “If you didn’t have it then you had to buy water from those who owned bicycles and a 20-liter jerry-can would cost you Sh500 which is a lot of money if you consider that we needed more than one jerry-can in a day. Today, if you don’t have a home connection, you can still access the public water point where you pay Sh100 for three 20-liter jerry-cans.”

“We would normally set off from home at three a.m. and return around six a.m. to start household chores and attend to the gardens,” she said. “At 10 a.m. we would set off again and return at two p.m. and we would carry the babies on the back to shower at the stream and the dirty clothes for washing there too.”

The technical assistance from the World Bank has also brought together two rural-oriented arms of government, the Rural Energy Agency and the Ministry of Water, for more efficient collaboration. This partnership will be formalized through a memorandum of understanding in which the energy agency would raise funds for solar energy, while the Ministry of Water would deliver the water infrastructure.

“Rural communities tend to be poor communities and any shilling saved goes a long way,” said Kristoffer Welsien, the World Bank’s Water and Sanitation Specialist and Task Team Leader of the technical assistance program. “The solar water pumping technology is not only inexpensive to operate, it also requires almost no system maintenance making it a good choice for rural communities.”