Apia, Samoa, November 4, 2015 – Two out of every three Samoans work in the agricultural sector, rearing livestock, growing crops, or performing a combination of both. Many livestock are traditionally reared for subsistence rather than profit, meaning almost all rural households raise backyard poultry and pigs for their own dinner tables.

“As a country, our livestock farmers aren’t very commercial,” said Agnes Meredith, Chief Veterinary Officer at the Ministry of Agriculture. “A lot of farmers keep livestock as a hobby because they also have other things going on, they’ve got crops and a lot of them also work in the town area.”

With 70% of beef currently being imported into Samoa, there is a huge opportunity for local farmers to enter the market as commercial sellers.

With that in mind, since July 2012, the World Bank and the Samoan Ministry of Agriculture and Fisheries have been working with these farmers through the Samoa Agriculture Competitiveness Enhancement Project (SACEP). Its goal is to support livestock producers and fruit and vegetable growers improve their productivity and take greater advantage of market opportunities.

Cattle herds in Samoa have been crossbred with foreign breeds in the past, but in-breeding over the past decade coupled with a lack of attention to nutrition and animal health has reduced their quality and resulted in fewer calf births. This was highlighted in the 2012 Ministry of Agriculture census which counted 29,000 cattle throughout the country, 6,000 fewer than in 2009.

To improve the genetic mix and bolster cattle numbers, the project helped the Samoan Government bring in 46Droughtmaster cattle from Australia’s top breeders. Previous imports of this tropical breed of beef cattle have proven successful in Samoa, quickly adapting to the climate, terrain and feed.

In April 2015, these cattle made history when they were the first ever to be flown into Samoa, in addition to 14 Dorper sheep, which were also brought in from Australian farms to diversify the Samoan flock.

“Bringing in these new cattle is a really good opportunity for the government to bring in new genetics,” said Agnes Meredith.

Yet importing the cattle required a significant amount of logistical work. “It was very challenging, considering it hadn’t been done before,” said Agnes. “Through a lot of communications, not only within our parties on this side, but also with our agent in Australia we managed to pull it off. "

" I think SACEP is going to boost the calving rate up to 60 or 80% hopefully in the next five years. "

Chief Veterinary Officer at the Ministry of Agriculture, Samoa

To manage this injection of new stock and maintain strong genetics for future cattle generations, the Samoan Ministry of Agriculture and Fisheries is keeping a core herd of purebred Droughtmasters on the government-run cattle farm at Togitogiga.

The World Bank-supported program has also introduced the concept of ‘multipliers’: local farmers working with cattle who will lease the purebred bulls for two to three years at a time, producing calves for sale to other farmers. Ten Droughtmaster breeding bulls have already been leased to multiplier farmers, providing new genetics for their own herds first, and in the future for other farmers. As part of the program, farmers also receive training to improve their animal husbandry practices.

“[Through training] we’re learning some of the techniques we can use to improve the management of our farms, as well as many other things which are new to us,” said Temukisa Rimoni, who runs the Sarona-i-toso Cattle Farm with her husband on Samoa’s largest island of Upolu. “The bull that we have, we’ve had it for quite some time now. So to get new blood, a new bull into our herd; that will really improve the production of new animals for selling.”

Better management of cattle, coupled with new genetics, is expected increase the frequency of calving and improve the quality of cattle.

“I think SACEP is going to boost the calving rate up to 60 or 80% hopefully in the next five years,” said Agnes Meredith. “We’re making progress and this is a new start, getting these cattle in. It’s really good for our farmers.”

Now in its third year, the project– with the close support of the Small Business Enterprise Centre and the Development Bank of Samoa – has approved grant financing of approximately SAT 2.5 million (US$316,500) for 172 livestock farmers to upgrade their pastures and facilities and increase their herds. The training on improved husbandry practices already appears to be making a difference, with provisional results seeing the calving rate increase from 48% at the start of the project to 64%. 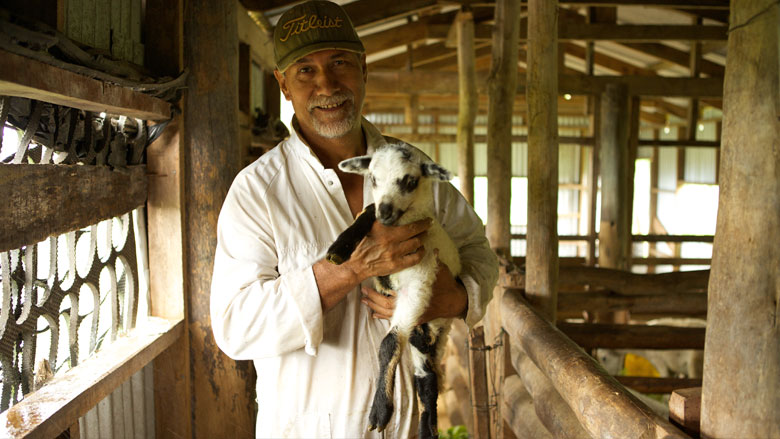