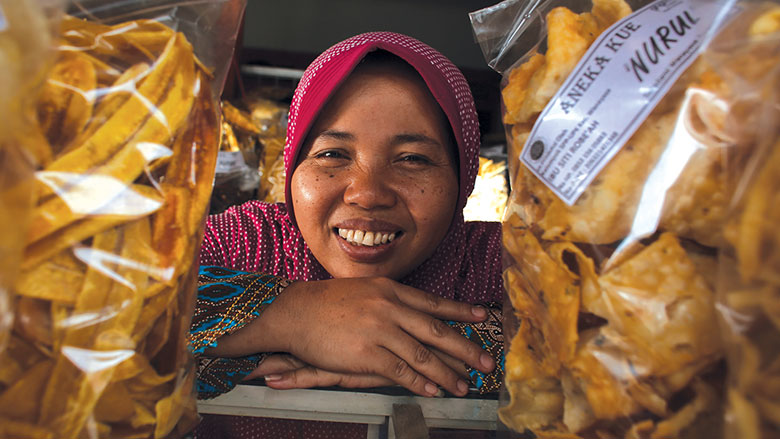 It helps to come from a community called Sukadami, which means ‘happy to discuss.’ It helps too that $50 can go a long way in the rural areas of Indonesia. It also helped that budding entrepreneur Siti Robe’ah was able to take advantage of a program that the Indonesian government had started with support from the World Bank. PNPM Mandiri, Indonesia’s largest community-driven poverty-reduction program, works nationwide to provide funds for poor urban and rural communities so they can invest in their own development priorities.

Before, I was an ordinary housewife, but since I got married in 1992, I liked making snacks like cheese sticks and onion chips. I didn’t have much money, so I could produce only two kilograms per day, or 50 packs. We sold the packs to small shops for Rp 500 (5 cents) each. We had to wait until our snacks sold before we could buy food for the family. Sometimes, our products didn’t sell. But I never gave up. I never stopped trying until I could make better snacks.

The Little Business that Grew

I am 40 years old. I live in Sukadami Village, West Java Province. I am the ninth child of 10 siblings. I have five children. My oldest child is 22 years old and the youngest one is two and a half.

My husband’s name is Abdurrohim. In the beginning, he sold snacks outside the high school. But then the school didn’t permit any street vendors to be in front of the school. So now my husband helps me deliver snacks to the small shops around the school.

There was a person who knew that I made snacks. She said my cheese sticks and onion chips were delicious. She told me if I needed more capital, I could get it from UPK (Activity Management Unit) from PNPM. Then I came to UPK with a friend and we were advised to set up a group.

In 2006, I became head of the group. Its name is Sistik. I had training from PNPM, such as bookkeeping, financial management, packaging and marketing. I implemented in my daily work what I learned from the training.I used some of the money from PNPM to renovate our work space. This space was very small and in my kitchen, at the back of my house. It was only 1x1 meter. Now we have a bigger and better place. We call it a production house. We also produce more kinds of snacks.

Now I have 10 employees. I asked my relatives and neighbors to join my business. They work half the day, every day—except me. In the afternoon, I go shopping again if I think I need more raw materials. And if there are snacks that need to be packaged or boxed again, I’ll do it.

Our snacks are sold in Purwakarta, Karawang, Subang [towns outside her village]. Some people buy them as gifts and send them to the Netherlands and to Saudi Arabia. As our income has increased, now I can also have my own shop attached to my house. Because of PNPM, I can have this kind of life, a better life. The loan from PNPM has changed my life. When I first got the loan, we produced five kilograms of snacks a day. Now, our production reaches on average 50 kilograms a day. If we work longer, we could produce around 70 kilograms a day.

Hopes for the Future

I already have some partners. They told me they want to do business with me. So we agreed. My profit at the moment is on average Rp 200,000 ($20) per day. Later, I hope I can set aside some funds to help other people, especially the elderly and orphans.

I want people to know me as a beneficiary of PNPM and that I have a successful small business. My family and I now live happier. I never thought it would be like this.

What I Dream for my Children

Hopefully my children can take over the business someday. Right now I am preparing my eldest child to take over my business. The District Health Office sometimes asks me to train other women on how to produce snacks. When I do that, my daughter Siti Rokayah takes over my role. I have taught her what materials to buy and how to buy them. So if I have to go somewhere, I don’t worry anymore. My daughter is ready to replace me.

Hopefully she can open franchises in surrounding areas. My second child sometimes comes with me to shop for the materials. If I am too busy, he is the one who does the shopping. He is interested in marketing and distributing the products. But right now he is finishing his studies. So I will wait.

At the moment, I still have no capacity to send my products to big cities such as Jakarta. Many people have asked, but I replied to them that I have to think it over. I hope my son can help me someday to realize this plan.

I’d Like You to Know: Stories from East Asia Pacific