GOMA, October 20, 2015 — Residents of Goma, the capital of North Kivu in eastern DRC, live at the foot of one of Africa’s most active volcanoes, Mount Nyiragongo. They are philosophical about their situation: “We are so small before the forces of nature. We came from dust and we will return to dust one day,” says Louise Bahati, better known as Mama Tcheka, a stone cutter who works near the Goma airport, where the landing strip was buried in lava during the volcano’s last eruption, January 17, 2002.

" Connecting Goma with the rest of the world will help to consolidate peace by rekindling trade and stimulating private sector development. "

Residents of Goma, the capital of North Kivu in eastern DRC, live at the foot of one of Africa’s most active volcanoes, Mount Nyiragongo.

That fateful day is one Bahati will not soon forget. “In 2002, I gave birth to my youngest daughter, Amina. The year she was born, the volcano erupted and I had to run for my life with my baby girl on my back,” she relates. “The eruption swept away everything in its path. When we went back home, there was nothing there.”

The scene of decades-long conflict between various rebel groups and the Congolese army, Goma is a commercial city of one million inhabitants situated on the border with Rwanda. Since the peace agreement signed in December 2013, the city has begun to pull itself together again. It is no easy task. Peace is precarious, as witness the presence of trucks from MONUSCO, the United Nations Organization Stabilization Mission in the DRC. Devastated infrastructure must be rebuilt, and some residents have had to come up with a new line of work.

Across the wide swath of the city’s center destroyed by lava in 2002, multistory dwellings are cropping up again. Along the road bordering the airport, men and women are using pickaxes and bare hands to turn volcanic rock into gravel or blocks of stone.

“We organized ourselves among the women to gather sand, pebbles, and rocks so we could sell them,” says Bahati, now the head of a stone workers’ organization for women that counts some 40 members. “The gravel and sand we collect helps to build houses and repair roads.” Although the work is difficult and dangerous, it enables Bahati to feed her family. And, she points out, to rebuild Goma. “It is a way of reusing what nature gave us,” she adds.

For the residents of Goma, the airport repair work financed by the World Bank (at US$52 million) represents a ray of hope. The region’s access to the outside world requires a functioning airport. After the 2002 eruption badly damaged the sole landing strip, limiting its capacity to a few domestic flights per week, sporadic flights linked Goma with Kinshasa, the capital. Now, thanks to the partial restoration of the landing strip financed with support from Germany, international flights have been reestablished as of summer 2015. Aid from the World Bank will enable completion of the long-term repairs.

“This work has a double objective: to improve safety and security to the level of international standards, and to repair the infrastructure,” explains Mohammed Dalil Essakali, World Bank team leader for the Goma Airport Safety Improvement Project. “Connecting Goma with the rest of the world will help to consolidate peace by rekindling trade and stimulating private sector development,” he adds.

The project will have an environmental component to minimize the risks of natural disaster from volcanic activity, as well as a social component to ensure that the airport’s surrounding communities also benefit from the economic recovery.

For her part, Louise Bahati has one wish: She, too, hopes to fly on an airplane to see other countries someday. 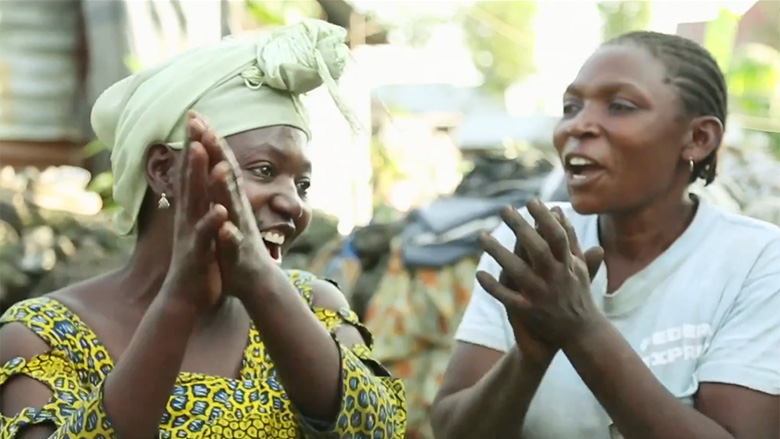