The hospital receives over 200 patients every day, with 60 percent of them seeking outpatient services.

DEHDADI DISTRICT, Balkh Province – The room is filled with women and men who have traveled from near and far to receive treatment. Even though it is so hot, in spite of ceiling fans running, that sweat is shining on their faces, they sit patiently in the waiting room of emergency services at Dehdadi 50-bed Hospital in Balkh Province.

Mohammad Rasul, 53, is one of the patients who have come to the hospital from Sheermast, a village in Dehdadi district. His traditional outfit, vest, and wrap as well as his long greying beard distinguish him from others. He decided to come to the district hospital to seek treatment after a health worker in his village told him of its good services. Dehdadi Hospital lies in

Dehdadi district in the central part of Balkh Province, about 15 kilometers from Mazar-e-Sharif. Rasul recalls the difficult times when there was no hospital: “One of our family members was due to give birth. The family was very poor and could not afford to travel to Mazar-e-Sharif city for delivery. For the safety of both mother and child, we, the neighbors, put some money together so that they could take the patient to a hospital in the city.”

The SEHAT Program aims to expand the scope, quality, and coverage of health services provided to the population, particularly for the poor, across the country, and to enhance the Ministry of Public Health’s stewardship functions. The program supports the provision of a basic package of health services and an essential package of hospital services in both rural and urban areas. It also works towards strengthening the national health system and MoPH capacity at central and provincial levels, so it can effectively perform its stewardship functions.

Dehdadi Hospital, which employs 40 health professionals, covers a population of 150,000. The 24-hour hospital has four wards—pediatrics, internal medicine, surgery, and gynecology—where patients receive free treatment and medicines. It also has an emergency operation theatre and a 24-hour ambulance service. An average of one patient is operated on at the hospital in 24 hours.

“We receive over 200 patients every day, with 60 percent of them seeking outpatient services,” says Dr. Abdul Khaliq Azaraksh, head of Dehdadi Hospital. The hospital admits those with serious health conditions as inpatients.

Female visitors wait in the que to consult doctors in Dehdadi District Hospital.

Rumi Consultancy/ World Bank
" The presence of this hospital has helped residents of Dehdadi district, most of whom have low economic status, enjoy a very basic right, which is access to health services. "

Through the SEHAT Program, the Ministry of Public Health has equipped the hospital with laboratory equipment, medicines, and diagnostic machines, including those for anesthetics, electrocardiography, and x-ray

Through the SEHAT Program, the Ministry of Public Health has equipped the hospital with laboratory equipment, medicines, and diagnostic machines, including those for anesthetics, electrocardiography, and x-ray. It has also provided training for hospital staff, particularly laboratory and diagnostics technicians, to ensure standard medical procedures are followed.

Nazanin, 21, is with her little son, who has been admitted to the pediatric ward. She says that her son has fallen ill because he is teething. “Doctors treat their patients very well here,” she says. “Medicine, ambulance service, and medical checkup are all provided by the hospital. In the past we had no access to such services and faced many problems.”

Dr. Shakila Niamati, 43, a gynecologist at Dehdadi Hospital, says that through SEHAT support, the professional capacity of doctors has been enhanced and the hospital has enjoyed access to more facilities. People also have more faith in the hospital now, she says. “Previously, people rarely brought their female patients to the hospital; this has changed now and female patients usually visit the hospital,” adds Dr. Niamati.

“The hospital’s services have saved lives of many mothers during delivery,” says Shahzada Habibi, Chairperson of Dehdadi Women’s Council.  “The presence of this hospital has helped residents of Dehdadi district, most of whom have low economic status, enjoy a very basic right, which is access to health services.” Unlike many other parts of Afghanistan, where pregnant women could die on the way to the hospital because of the long distance to it, residents of Dehdadi district no longer have to bear such pain, says Shahzada Habibi. The hospital’s improved services have had a tangible impact on the health profile of Dehdadi residents, says Dr. Abdul Khaliq Azaraksh. The annual incidence of tuberculosis in the district has dropped from 333 to 150 reported cases per year. Previously, many Dehdadi residents suffered from various seasonal epidemics every year, but the incidence of such epidemics has dropped markedly. 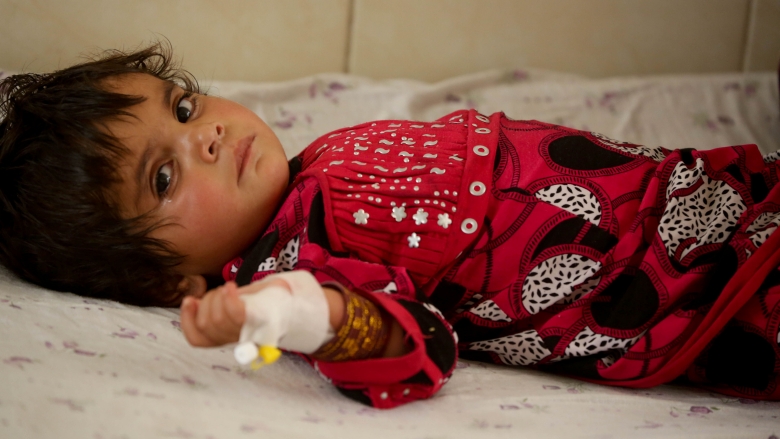