“We are the Co-operative!”

Over the heights of Nerqin Tsaghkavan, in the Tavush region of Armenia, the sun rises as I have not seen it in several years. Within minutes, it flies above the horizon ... but it feels like it's on your lap, if you’re brave enough to touch it!

“We go to bed earlier than most people, and wake up earlier to watch the sunrise,” says Gevorg Galstyan, as if reading my mind. “That’s like a hobby. The morning air is always cool and sweet to me, and I collect my thoughts for the entire day!”

We had met with Gevorg very early in the morning, by Yerevani standards. Not in front of a coffee-shop, but the village mayor’s office - the cultural and social center of any Armenian village. I was not late, but he was looking at his watch as if thinking "these people from the capital are always late...”

Like most people in his village, Gevorg is a cattle farmer. As were his parents. The mountainous area around the village, where he and his young family live, is famous for its fantastic view and pastures. In the room, while the secretary prepared coffee, Gevorg suggests to listen to his story, and address any questions I might have. I got it – timing is key to him. This is how we arrived at "the monologue". 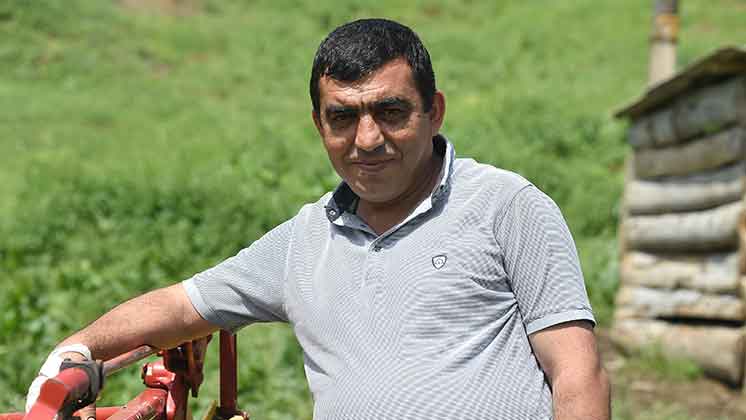 Not "Kolkhoz" but Co-operative

We learned about "this promising project in stock-breeding" from our mayor. Then the project team led by the Minister of Agriculture called a townhall meeting in the village. That was in early spring of 2011. When they introduced the concept of collective efforts and enumeration of cattle, etc., someone exclaimed, “Oh my God, ‘kolkhoz’ is coming back…” People were really scared of ‘kolkhoz’ (soviet collective farming) reanimation.

Like most rural people on earth, we are conservative. Nobody would ever agree to invest money without the promised tractor in front of his/her eyes. I am a farmer of almost 20 years, and have gone through so many meetings and promises while the "co-operative" is totally new to us. We all realized that the way of our current farming has to be changed. Fundamentally. This is how all the 44 farmers in the village joined the co-op!

We are pioneers. Our neighbors, who started a few months later, were asking about the first steps, as if we knew all about what a co-op was. Funny. Formally, the co-operative of the Pasture Users Association in Nerqin Tsaghkavan community got state registration in April 2011.

Due to poor farming practices, a large part of our pasture lands were turning into deserts, so we agreed that the project’s target was to restore soil health as a must. We, I mean all the co-op members, agreed on the amounts per capita as a co-share of the co-operative, and identified the basic needs that the project team could help with, such as basic knowledge, advice, and the arithmetic of keeping the co-op alive! This is where we started to learn how to move forward as a village!

If someone asks me now what our advice will be to start-ups, I will say that the only message I have is: go ahead, don’t wait and lose time! 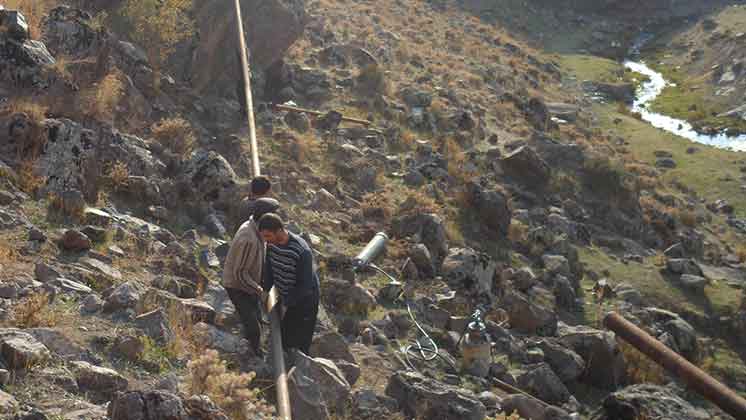 What we are most proud of is that we have the instruments now – we own them! Five stock watering points have been installed in the pastures and in the village; once the impassable road to upper level pastures has been improved. A tractor, a grass mower, a grass collector, a baling machine and a plough have been provided as well. 650 hectares of underused pastures have been provided with water, have become useable, and are now being grazed on an equal basis according to a rotation scheme. This led to the recovery of the nearby pastures that were overused in the past and, as a result, degraded and eroded.

As of now, we have achieved a 20% increase in cow milk yield, and a cattle weight gain of 60%. The fodder level for the confinement period has increased about 10%. Pasture fees have been introduced and last year they amounted to about 660,000 AMD. Thanks to the accumulation scheme, we purchased a caterpillar tractor for about 3,500 million AMD. These statistics are fantatsic - you can’t imagine the level of farming poverty before this project, I mean, not physical, but in terms of instruments. We’re getting out of the trap of the last two decades! 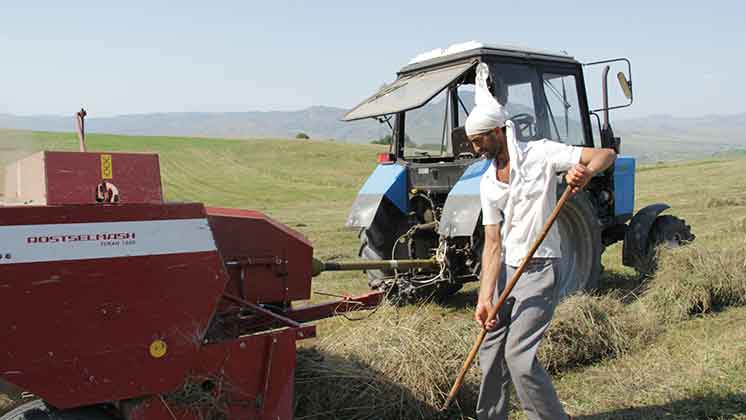 This move from small-size household farming to co-ops is a revolution. I am serious. The land was given back to farmers over 20 years ago, followed by a "do whatever you wish" silent message, at least in stock-breeding. Despite all the minor or big programs, the change was not materialized and sustained. This project leads to a change in the way of traditional farmers' thinking, the philosophy of soil.

Some of our villagers are seasonal workers. Previously, they were concerned with what would happen and when they would leave - who will take care of the cattle, fodder, etc. Not anymore. They know that the co-op will take care of all the tasks.

Co-operatives are like families. Secure farming, I will call it this way. The co-op creates a "new type of rural economy" that could allow people to grow in their experience, socially and personally, as well as in responsibility, hope and co-operation. Another 2-3 years and these features will become more visible. I feel this change during each board meeting. 10 of us united and are already focused on the future. We are the Co-operative! 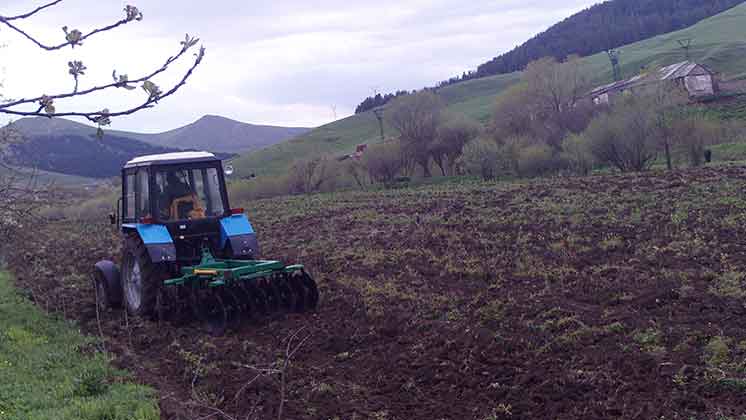 Our vet is based in Sevkar, a few kilometers (far) from us. It’s OK. The service we receive under the state order is good and timely with all the required seasonal treatments of cattle. The rest is private, you have to pay and nobody wants to. We will need to come to an agreement with the other five co-ops in the sub-region on this issue, so that we are all equally contributing, and we have the vet next to us during the season in the highlands. This is not the only topic. We need to agree on the maintenance of the road that leads to the upper level. This will bring us to another level of co-operation among the co-ops. 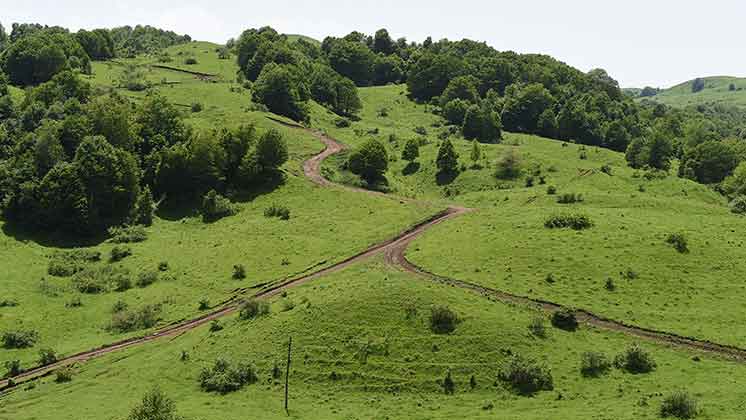 This is the first time I am meeting with someone from the institution that designed and financed the project. We, all the members of the co-op in Nerqin Tsaghkavan, are grateful for their generous support, advice, everything. So the people on the other polar of the globe have nurtured a project, which improves the lives of farmers in Armenia. Thank you!

However, I would not be a farmer if I miss the opportunity to tell you that this fantastic scheme should be completed with one more effort - activity. Before the project I had around 50 cows, I now have 100. Mostly meat cows. Not bad, but many other farmers and I would like to have milking cows, which is more beneficial for community development.

The dream is to have a milking station on the upper pasture area. Milk collection and processing production will boost our earnings. I am talking now on behalf of six co-ops of the sub-region and nine other communities. Modest calculations show that we could have up to 9-10 tons of milk per day. Milk for bigger production and our own needs, such as for cheese, butter, and sour cream. It’s a huge perspective and will complete the chain of activities that are underway across the country.