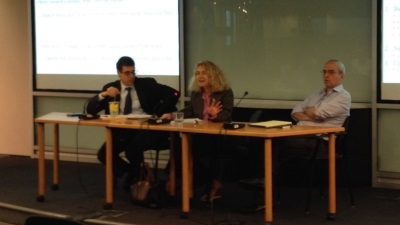 Earlier this month, however, Lead Economist Sergio Schmukler systematically debunked these myths during the course of his presentation at the June Policy Research Talk. The Policy Research Talks are a monthly event held by the research department to foster a dialogue between researchers and their colleagues across the World Bank.

Research Director Asli Demirguc-Kunt, who hosted the event, argued that “policy makers often think that many of the shortcomings of financial systems can be fixed by promoting institutional investors.” She explained, “Their development is seen as leading to the expansion of capital markets, the extension of the maturity structure, and all sorts of other good things. Today we are going to compare these expectations to the data, and see if they are met.”

Schmukler and his colleagues’ research shows, however, that not only do institutional investors not invest according to expectations, but sometimes even behave counterintuitively. Drawing both on global data and country examples, he demonstrated that institutional investors exhibit herding behavior, pass over assets with better risk-adjusted returns, and invest pro-cyclically, thereby increasing economic volatility.

The case of Israel provides a particularly stark example. In 2009 MSCI—a major supplier of investor indices—announced that Israel would be upgraded from its emerging markets index to its world index. But when the upgrade became effective a year later, Israel experienced a sudden and massive reversal of capital flows, with a nearly $2 trillion net outflow.

Schmukler explained this counterintuitive behavior in terms of a benchmark effect created by the desire of institutional investors to not let their portfolios deviate too far from either an index or from the portfolios of their competitors. He cited the “incentives for asset managers, who are rewarded for investing in low-risk vehicles that mature over a short period.”

" Financial intermediaries are the brains of the economy, but the way they work is different from what we expected. "

Achieving a socially optimal outcome from the activities of institutional investors has proven challenging. “Financial intermediaries are the brains of the economy, but the way they work is different from what we expected,” Sergio concluded. As a consequence, pensioners receive a lower return on their savings, fewer companies are able to access finance and grow, and fewer countries are able to tap into this source of investment.

From a policy perspective, Schmukler pointed to the need to foster healthy competition between institutional investors, carry out additional research into how asset managers are incentivized and rewarded, and re-consider the role of the public sector in managing and regulating retirement savings.

Discussant Roberto Rocha, Senior Advisor and Global Lead for the Finance and Markets Global Practice, emphasized the importance of the research for the World Bank’s mandate to develop long-term finance for infrastructure, housing, and other important development objectives. Rocha discussed the mixed outcomes of the multi-pillar reforms of the 1990s and 2000s—including private pillars based on the Chilean model—and agreed that the performance of most of these new private systems had fallen short of expectations. He emphasized the “new emphasis on voluntary, employer-based pension systems,” following the efforts of several developed countries to increase voluntary coverage at a low cost and ensure more effective portfolios. He called for additional research, particularly on the difference in performance between employer-based pension funds and individual, retail options. “Several countries have all of these types, and we need to better understand the differences in performance between them,” he said.