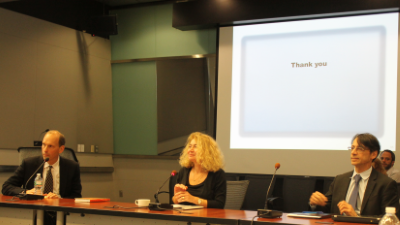 Over the last 30 years, the proliferation of borewells with motorized pumps has allowed farmers ever greater access to precious groundwater. This resource has supported gains in agricultural productivity, particularly in South Asia, which accounts for nearly half of the global groundwater used for irrigation.  However, increasing exploitation has resulted in resource depletion.

This month’s Policy Research Talk was delivered by Lead Economist Hanan Jacoby, who discussed South Asia’s groundwater dilemma as seen through the lens of welfare economics. The Policy Research Talks are a monthly event held by the research department to foster a dialogue between researchers and their colleagues across the World Bank. Drawing on census and survey data collected in India and Pakistan, Jacoby discussed policy approaches to addressing groundwater depletion.

Research Director Asli Demirguc-Kunt, who hosted the event, emphasized the importance of water to economic and social development. “Water is vital to maintaining health, growing food, generating energy, and managing the environment,” she said. “Ensuring that people have access to reliable water is very important, as is the management of water resources.”

There are over 20 million wells across South Asia. Jacoby’s talk contrasted the Indian Punjab, where wells pump from deep aquifers, the Pakistani Punjab, where similar aquifers are recharged by a dense network of irrigation canals, and Andhra Pradesh, which has shallow aquifers.

“After growing by leaps and bounds, groundwater has taken over surface water as the main source of irrigation in India,” Jacoby said. “This is private sector development on a massive scale.”

" This is private sector development on a massive scale. "

This shift has resulted in increasing agricultural intensification, with many more farmers now cultivating in the dry season. Intensification has come at a cost, however, particularly in Northwest India, where the water table has been falling at a rate as high as one-third of a meter per year.

In contrast, groundwater in the Pakistani Punjab, where there is far less depletion, is typically used as a buffer that supplements surface irrigation provided by canals. And in Andhra Pradesh, monsoonal rains help recharge aquifers, limiting depletion.

Jacoby tackled four interrelated questions in his talk: (1) What are the economic returns to well drilling?; (2) Is groundwater being overexploited?; (3) Are groundwater markets working efficiently?; and (4) What policies can arrest groundwater depletion?

In his discussion of the economic returns to well drilling in Andhra Pradesh, Jacoby drew a distinction between the net returns accruing to farmers with and without state subsidies in the form of free electricity used to run pumps. While the net private returns to drilling averaged 3 percent of permanent income, Jacoby found that without the power subsidy, many wells would simply not be economically viable.

Building on models from the field of resource economics, Jacoby also found that groundwater is being depleted more quickly than is socially optimal. Jacoby discussed the phenomenon of borewell clustering, whereby farmers dig new borewells when they see a neighbor has a successful borewell, and how clustering leads to well interference. “Continual entry of wells means that each additional well adds very little to the marginal increase in water, while incurring high fixed costs. Through this rent-seeking process, you can get huge welfare losses.”

In principle, efficient markets for the sale of groundwater could help reduce the number of new borewells, thereby spreading the fixed costs of borewells over more farmers and spreading the gains more widely. However, in practice these markets have proven to be imperfect. Data showing that sellers charge lower prices to their share tenants than to others buyers points to a degree of monopoly power in these localized markets. Uncertainty around the amount of water likely to be left at the end of the planting season also limited the potential benefits associated with groundwater markets.

Jacoby concluded that—at least in certain contexts—there is a strong economic rationale for controlling groundwater exploitation in South Asia. But questions remain about which policies are most likely to be cost-effective. Jacoby outlined a number of options, including removing subsidies for water-intensive crops, charging for electricity, creating a permit system for new wells and power connections, artificially re-charging aquifers with rainwater, community monitoring of aquifer levels, and subsidizing drip irrigation.

Discussant Richard Damania, Global Lead Economist in the World Bank’s Water Practice, highlighted the escalating global demand for water, driven by climate change, population growth, and economic growth. “We are using more water, and we are using more water per person. GDP per capita is a bigger driver than population.” Damania pointed to the need to allow price to signal scarcity of this resource, rather than adopting measures that increase its supply. He concluded with a call for the next generation of research in this area to focus on identifying the mechanisms that can best achieve collective action around the use of shared water resources. 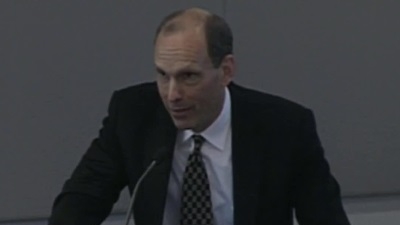