Love, Behavior, and Incentives in the Time of HIV/AIDS 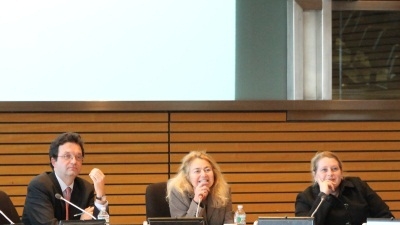 Since the beginning of the HIV/AIDS epidemic, the disease has infected 78 million people, and 39 million have died of AIDS-related illnesses. In 2013 alone, 2.1 million people were newly infected and 1.5 million died from AIDS. There are large geographical disparities in the spread of the epidemic: three countries in Eastern Africa have prevalence rates between 5 and 10 percent, and nine countries in Southern Africa have prevalence rates greater than 10 percent. While globally infection rates and mortality rates have declined, advances in anti-retroviral drug treatments have meant that more people are living with HIV/AIDS. Methods of treatment have improved, but what measures will bring about changes in behavior that will reduce transmission rates?

Research Director Asli Demirguc-Kunt, who hosted the event, placed de Walque’s findings within the larger context of the recent response to the outbreak of Ebola. “What can we say about Ebola, given the lessons we’ve learned from AIDS—the successes and the failures?” she asked.

De Walque began by outlining the last three decades of the HIV/AIDS epidemic and the evolution of the public health response. Thanks to advances in anti-retroviral therapies that are available for a few hundred dollars a year, people living with HIV in developing countries can now have near-normal lives. However, some African countries would have to foot a bill comparable to their debt-to-GDP ratio to cover the cost of this lifelong treatment. Therefore, governments have a strong incentive to invest in preventative measures.

To create effective preventative policies, it is vital to understand the determinants of behavior, including education, occupation, and gender. On the topic of gender, de Walque dispelled what he described as a “pervasive, if unstated belief: that unfaithful males are the main link between high risk groups and the general population.” In fact, his findings from Burkina Faso, Cameroon, Ghana, Kenya, and Tanzania show that not only are two thirds of infected couples discordant—meaning that only one of the spouses is infected—but in 30-40 percent of these couples, the woman was infected, and not the man. This gap between perception and data underscores the importance of making policy decisions based on empirical evidence. Indeed, “mass information, education and communication campaigns are important to influencing behaviors, but might be complemented by strengthening the motivation to act on that information,” he said.

De Walque conducted innovative field experiments in Sub-Saharan Africa that tested the effects of offering financial incentives such as conditional cash transfers and lottery tickets for people to continue to test negative for sexually transmitted infections. “Linking financial rewards to negative STI tests created a price effect, an income effect, and a change in the time horizon by making the rewards for safe sex much closer to the present,” he said. His data suggest that by making the price of unsafe sex higher and more immediately felt, such incentives can have a significant impact on behavior. In one study, the use of lottery tickets lowered HIV incidence by 22 percent after two years, with women experiencing the strongest effect. These results were achieved with relatively modest incentives: in Lesotho, for instance, the tickets were for lottery prizes of $50 or $100, compared to monthly incomes of about $30.

" Linking financial rewards to negative STI tests created a price effect, an income effect, and a change in the time horizon by making the rewards for safe sex much closer to the present. "

De Walque also compared and contrasted the lessons of this epidemic with the recent outbreak of Ebola, and emphasized the need for governments to effectively communicate information and reduce public fear that leads to aversion behavior and exacerbates economic costs.

Discussant Marelize Gorgens, HIV Trust Fund Program Manager, spoke about the “continual challenge of taking research findings and applying them to policies.” She identified four key areas for continued efforts: Improving the translation of the policy implications of research to governments; better analysis of the cost effectiveness of policies that have multiple benefits, for example, increased education and lower HIV transmission rates; incentives that can promote uptake of biomedical interventions, for example male circumcision; and an increased reliance on biomedical data rather than self-reported sexual or intervention-uptake behavior, which can be unreliable.