Women in Myamar are preparing sacks of rice for the market.

Yangon, Myanmar – U Myo Myint, who graduated from a prestigious Myanmar university, once aspired to become a successful rice farmer. The Oak Kan Town farmer bought a big plot of land and- in spite of doing everything by the book and using all the local farming wisdom passed on to him- couldn’t turn a profit.

“I have a bachelor degree in Agricultural Economics and 75 acres of cultivated land,” U Myo Myint says, “However, I am poor to the bone”.

He breaks down his expenses from the last rice-growing season and reveals his meager profit: $50 per acre (or a total of $3,750 from all his 75 acres). This isn’t enough to cover his family’s food, living costs, education fees, and hospital expenses.

Most farmers in Myanmar make even less than him. U Phyo of Zeegon Town owns nine acres of land where he grows rice. With his income, he could barely make ends meet.

The vicious circle of poverty is hard to break

U Myo Myint and U Phyo both own land without an irrigation system. They have no choice but to grow rice during the monsoon season only.

Their access to additional financing is also very limited. The Myanmar Agricultural Development Bank provides credit for six months only. This means that farmers have to sell their entire rice stock immediately after harvesting--- when the prices are at their lowest--- to repay their debts. Borrowing from private lenders, although expensive, becomes necessary to sustain their business. As a result, all farmers are heavily in debt.

“All farmers are struggling with the same challenges. We are faced with very low prices after harvesting, the rising cost of rice production, and hardly any access to bank loans that are suitable for farmers like us,” said U Phyo.

Nearly half of Myanmar’s population of 51 million is engaged in rice production. A majority of them live close to the poverty line and risk falling into poverty when rice prices change unpredictably.

Over the last five years, rice prices have increased by 40% for customers. Changes in rice prices have also been more sudden and pronounced than those in neighboring rice export competitors, like Thailand, Vietnam, and Cambodia.

Most of the paddy rice is produced at the end of monsoon season (November and December) because of a shortage of quality seeds with different growth durations and harvest times. It’s also due to the lack of irrigation. As a result, the domestic rice market is overloaded with freshly cropped rice and prices drop.

Prices go even lower in January, when farmers have no choice but to sell their paddy. Myanmar doesn’t have enough warehouses where farmers can store their paddy rice until prices improve and allow earning bigger profits.

U Phyo is a rice farmer from Zeegon Town in Myanmar.

Photo: Nyain Thit Nyi / World Bank
" All farmers are struggling with the same challenges. We are faced with very low prices after harvesting, the rising cost of rice production, and hardly any access to bank loans that are suitable for farmers like us. "

The harvest season is the only time of the year when the Shwe Ryae Rice Mill can work on full speed. The 120-year-old wooden mill still runs on a steam engine. According to its owner, Daw Myint Mynt Thaung, the mill is servicing 29 nearby villages.

“If we don’t receive a $500,000 investment within the next six months to replace the mill’s equipment, we may be forced to shut it down,” said Daw Myint Mynt Thaung.

Nearly 85% of mills need capital to improve facilities and equipment and to improve the quality and efficiency of milling. An improved quality of rice is the key for bigger farm incomes and taking Myanmar’s rice to new and more profitable export markets.

In order to integrate Myanmar’s domestic rice market to the global rice market, investments in rural roads and the telecommunications sector are essential.

Efforts to reduce rice price volatility require commitment, time and resources in Myanmar as in elsewhere. According to a new report by the World Bank, opening the milling and warehouse sector to direct foreign investments is the way forward for Myanmar. Modernized rice mills and warehouses are better positioned to increase private stocks, which, in turn, will buffer price fluctuations. More efficient mills will trigger higher productivity and usher in quality improvements at the farm level.

Farmers also need greater access to irrigation and seeds of crops with different harvesting periods and good export potential. In addition, they need advice on modern farm technologies that will help to expand the production cycle and increase their rice production and profit.

For farmers like U Myo Myint and U Phyo, the ability to achieve a higher farm income is one of the key ways to achieve better food security and escape poverty. 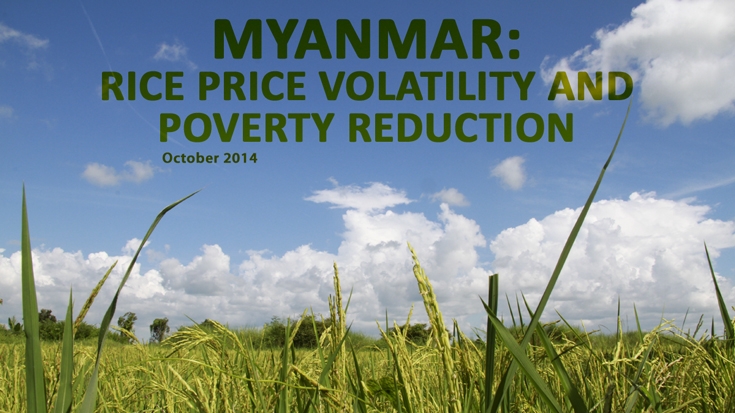