For Up to 800 Million Rural Poor, a Strong World Bank Commitment to Agriculture

About 78 percent of the world’s poor people— close to 800 million people at the time of writing - live in rural areas and rely largely on farming, livestock, aquaculture and other agricultural work to put food on their plates and make a living.

One of them is Adekalie Kamara, a rice farmer in Sierra Leone who is counting on more productive farming methods to “give me hope of a good reward for my hard work.” Meanwhile, Jan Agha, an Afghan farmer is improving his livestock business to help feed his eleven children. “We are learning better ways to feed, protect and clean our animals. We are getting richer, too.”

For Adekalie, Jan Agha, and millions of others, agriculture is the starting point for their pathway out of poverty.  Long acknowledged as one of the most powerful tools for raising the incomes of very poor people, agriculture is integral to ending poverty and boosting shared prosperity for the world’s poorest.

Photo: World Bank
" Agriculture must become part of the solution to many of the world’s most pressing development problems. "

But agriculture is not just important to the rural poor. It is also critical to fighting hunger, tackling malnutrition and boosting food security for a population that is expected to reach 9 billion by 2050. Agriculture also creates jobs--on farms, in markets, and throughout the farm-to-table food chain. And because agriculture is one of the sectors that is most vulnerable to extreme weather and one of the largest contributors to greenhouse gases—it is also important in the fight against climate change.

The World Bank Group has steadily increased its investments in agriculture over the years.  In 2014, the Bank Group made $8.3 billion in new commitments to agriculture, establishing itself as a leading financier of the agriculture sector. The majority of Bank lending goes to increasing productivity, food security and improving access to markets.  The Bank’s work in agriculture is also aimed at helping farmers cope with risks, reducing gender inequality, making agriculture more environmentally sustainable and advancing climate-smart agriculture.

“Agriculture must become part of the solution to many of the world’s most pressing development problems,” said Juergen Voegele, Senior Director of the World Bank’s Agriculture Global Practice. “It is important for developing countries because of its potential positive impact on everything from job creation and food security, to fighting climate change. When done sustainably, agriculture not only grows economies, but also improves the daily lives of the world’s poorest people.” 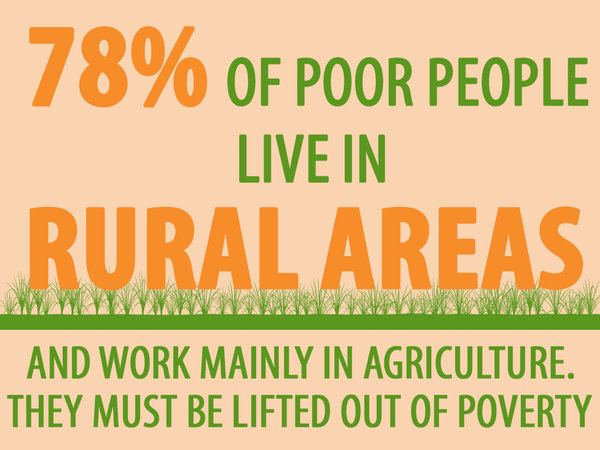