Djibouti Turns to its Peers for Advice on Reaching its Goals

“In the next 20 years we would like Djibouti to reach the level of Singapore or Dubai.”

Djibouti is preparing for the future. The small country on the Horn of Africa has outlined an ambitious set of goals it hopes to achieve over the next two decades. These goals are the result of careful research, assisted by the World Bank, to identify under-exploited sectors of the economy with the potential to generate sustainable growth. The results of the exercise were collected in a document, ‘Djibouti Vision 2035’ that serves as the government’s blueprint for development.

Ilyas Moussa Dawaleh, Djibouti’s Minister of Economy and Finance, in charge of Industry, recently recalled that at independence in 1977 his country had only one high school, one street and two doctors. Djibouti has since taken advantage of its strategic position at the mouth of the Red Sea, along one of the world’s busiest shipping lanes, to develop an important maritime port and establish the foundations for a burgeoning commercial hub.

Djibouti still faces high levels of poverty, and is committed to doing much more to promote economic growth and the job creation and shared prosperity that come with it. The World Bank study (“A new growth model for Djibouti”) that underpins ‘Djibouti Vision 2035’ highlighted the following promising areas: transport and logistics, telecommunications, tourism, fisheries, and light industry. “Djibouti needs to get over that ‘hump,’” observed Shanta Devarajan, World Bank Chief Economist for the Middle East and North Africa Region, “where you turn yourself from a natural resource based economy into a dynamic manufacturing and service center.”

It was precisely to get over that ‘hump,’ that Djibouti turned to its peers for advice. In assisting with the preparation of the report, the World Bank also identified a number of countries with similar characteristics to Djibouti that had success in achieving similar goals.  The World Bank and the government worked together to host a south to south exchange of knowledge, in which representatives of Cape Verde, Dubai and Mauritius were invited to Djibouti to share their valuable experiences.

An event was organized that drew over 300 local and foreign participants from government, development partners, the private sector, civil society, and academia. The government used the opportunity to launch ‘Djibouti Vision 2035’. In his opening speech, the Prime Minister of Djibouti, Abdoulkhader Kamil Mohamed reaffirmed the commitment to reinforcing strengths and diversifying the economy as the key ingredients of the country’s development plan.

One of the most valuable lessons to emerge from the south to south exchange of knowledge, according to World Bank Resident Representative in Djibouti, Homa-Zahra Fotouhi was that countries not only share similar goals, but also face similar obstacles. Djibouti, she noted, is small country with high energy costs – but so too are Cape Verde and Mauritius. Yet Mauritius has made significant progress in diversifying its economy and Cape Verde has successfully developed its tourism sector. These were the lessons each came to share.

The level of attendance and engagement at the event was unprecedented for Djibouti. It reflected the interest on the part of the country’s private sector and civil society to learn from the experiences of other countries, and to be central players in the design and implementation of Djibouti’s development strategy. This resonated with another overarching lesson from the event, on the importance of building a broad consensus around specific goals.

The cases of Mauritius and Cape Verde – which recorded significant improvements in the space of a few years – particularly demonstrate the importance of transparency, good governance and competition to promote economic diversification and encourage job creation. These are the basic elements of a formula that could bring Djibouti a step closer to reducing poverty and achieving sustainable and inclusive growth for the benefit of the entire population.

The event also provided the government with specific advice on each of he areas it plans to focus on. The government will convert this advice into concrete actions for the realization of ‘Djibouti Vision 2035’, and for establishing a broad consensus around the goal of accelerated development.

“In the next 20 years we would like Djibouti to reach the level of Singapore or Dubai,” said Youssouf Moussa Dawaleh, President of the Djibouti Chamber of Commerce, “we can get there if we work together.” 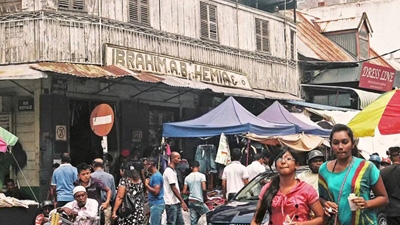