The 2014 Civil Society Townhall at the World Bank/IMF Annual Meetings was held at the World Bank’s Headquarters on  Wednesday, October 8th.   The Townhall provides an opportunity for civil society representatives attending the Meetings to engage directly with the President of the World Bank Group and the Managing Director of the International Monetary Fund.  This year, Jim Yong Kim and Mme. Christine Lagarde were joined by Buddy Buruku, Policy Advisor at the African Center for Economic Transformation in Ghana, who moderated the session.   The one hour event was attended by some 250 CSO representatives from over 80 countries.  For the first time, the Townhall was broadcast live online via World Bank Live, in addition to being live Tweeted.  Thus questions were fielded from the floor as well as from the online audience.

In introducing the event, Ms. Buruku set out the following themes for the discussion: IMF and World Bank Operations; WBG safeguards review; poverty and inequality; the global economy and the emerging scourge of Ebola; emerging markets; and citizen engagement and democracy. She asked that participants’ questions follow  these themes. She then kicked off the session by herself posing one question each to Mr. Kim and Mme. Lagarde.

The first question was directed at Mme. Lagarde: amidst the current economic climate, Ms. Buruku asked, what keeps Mme. Lagarde up at night— and what gives her cause for hope? Mme. Lagarde quipped that while she is actually quite a good sleeper, she cited three key issues that are currently top priorities for the IMF under her leadership: jobs and inclusive growth; gender equality (particularly education, access to finance, and jobs for girls and women); and climate change. She noted that the IMF has published extensively on equality, including on the relationship between excessive inequality and growth, and how re-distributive policies can promote growth. However, the crucial next step is to operationalize these findings, using them to inform the IMF’s day-to-day work.

Turning to what makes her hopeful, Mme. Lagarde noted the fact that the Fund is being heard. She talked about a recent visit with Japan’s PM, who has recently strongly advocated increasing women’s labor force participation, as a promising example of the progress she has witnessed towards gender equality. She also spoke about the ability of the IMF to very quickly mobilize funds for Liberia, Sierra Leone, and Guinea, the three countries most affected by the Ebola crisis. She shared details from a recent phone conversation with Ellen Johnson Sirleaf, the President of Liberia, who told her that, because of what the World Bank Group and the IMF had been able to contribute they are beginning to see the ‘light at the end of the tunnel’ in terms of fighting Ebola.

Ms. Buruku then asked Mr. Kim what he believes is the role of civil society in the context of the many shifts that have occurred in the development space over the past seventy years, particularly civil society’s role in relation to the World Bank Group. Mr. Kim began by telling the audience that twenty years ago he protested on the sidewalk outside this very building as he joined the 50 Years is Enough Campaign calling for the Bank’s closure on its fiftieth anniversary. But things have changed dramatically since then. Today, members of civil society don’t have to voice their opinions from the World Bank’s sidewalks, but rather are invited into its boardrooms. The Bank has adopted environmental and social safeguards, and governments and CSOs alike have consequently come to expect the adherence to high safeguards standards from all development institutions, including the new development banks that are just now emerging.  He noted that the Bank is being scrutinized and that’s very important and positive. 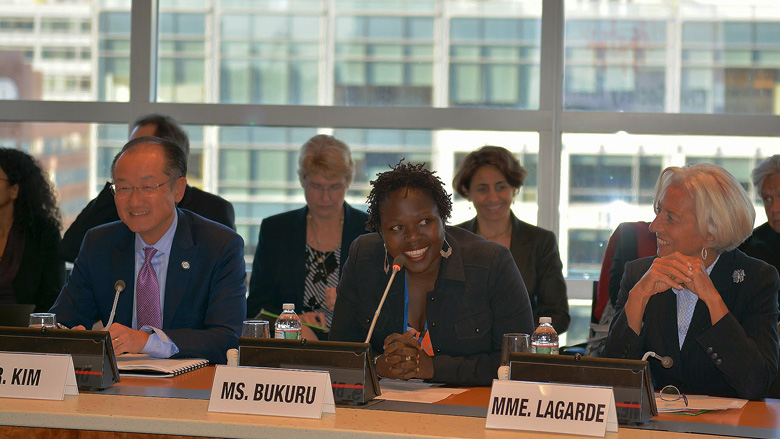 Ms. Buruku then opened up the session to questions from the floor and online. In addressing a first wave of questions about safeguards, Mr. Kim took the opportunity to announce that the World Bank Group will extend the consultation period on the new safeguards policy in order to ensure the participation of everyone who wants to contribute. Mr. Kim also said that the Bank is proposing to establish a new framework that will help manage the safeguards process, not just in the beginning of a project but throughout implementation as well. Ultimately, Mr. Kim cautioned, that the proposed safeguards policy must be approved by the Board of Directors, which will involve complex negotiations across vastly differing viewpoints. He concluded by noting that CSO views and positions are welcomed and are being heard internally.

In response to concerns raised about the Ebola crisis and what the World Bank Group and the IMF are doing to stop the spread of the disease, Mme. Lagarde again cited the rapid mobilization of resources achieved by both institutions, and stated her own and Mr. Kim’s commitment to doing more. The role of the World Bank and the IMF is mainly providing budgetary support, and indeed the stalling of revenues due to the crisis is becoming a dire issue. The UN’s recent commitment to provide badly needed coordination to the effort will be hugely important to ensure that allocation and implementation are well executed.  She noted the need to keep politics out of the fight against Ebola and stressed the need for a well-coordinated response among members of the international community at all levels.

Mr. Kim added that what is needed is to provide high-quality treatment to all patients and encourage home-based care. He noted that the international community has spent far too much time arguing about the right approach, and no less than eleven months have passed without a global plan set in place.  He compared this situation to the AIDS epidemic in Africa just ten years ago.  At that time, health and development professionals nearly gave up on the idea of treatment because they thought adherence to the intensive, five-doses-a-day ARV therapy wouldn’t work in Africa. History is repeating itself now, but we must not throw up our hands, Mr. Kim cautioned. We must get people the best possible quality services, call in the world’s experts who know how to do this in poor country settings, and stop this epidemic of low aspirations for people in Africa.

Additional topics covered throughout the Townhall discussion included IMF surveillance role, carbon pricing, access to finance, and data and transparency. One CSO participant asked about the IMF’s ability to play a global surveillance role with even handedness and ‘speak truth’ to large shareholders. Mme. Lagarde called on CSOs to join her in asking the US Congress to approve governing reforms of the IMF. She noted that the quota and governance reforms that were agreed upon in 2010 need to happen, because it is critical for the Fund’s continued credibility, legitimacy, and effectiveness that everyone is represented around the table. She said that she disagrees with the suggestion that the IMF wasn’t able to play its surveillance role effectively. She argued that the IMF was, in fact, doing its job in this regard. Mme. Lagarde noted that in the past three years, the IMF has experienced the most resistance from European countries, not from emerging markets, on issues like recapitalizing banks, crisis firewalls, and fighting deflation.

In response to a question on climate change, Mme. Lagarde highlighted two recent IMF reports, on energy subsidies and energy pricing. She pointed out that including externalities into pricing is critical and good for public finance and climate preservation. She stated that the Fund will continue to support work in this area. In his response Mr. Kim cited significant strides made towards achieving high-level support for carbon pricing: some 74 countries, more than 1,000 companies, and eleven regions representing 52% of global GDP signed a statement stating their commitment to the cause ahead of the UN’s Climate Leadership Summit in September, with a long-term goal of preparing a framework at the climate negotiations in Paris in 2015. Mr. Kim stressed his belief that introducing externalities into pricing is integral for growth. He also commended the IMF’s strong position on carbon pricing, and on other issues like climate change and Ebola that have not been considered part of IMF’s mandate in the past. He attributed this revolutionary shift to Mme. Lagarde’s strong leadership.

In response to a question about access to finance, Mr. Kim noted that the World Bank Group recently announced a target for achieving universal access to financial service by 2020, and said that he and his team have designated a ‘war room’ where they are tracking access to financial services. All the market services are aligned towards this goal, he said, including big private sector players like MasterCard and Alibaba Group as well as many other types of organizations.  As the Townhall drew to a close, Ms. Buruku thanked everyone who participated in person, as well as those who watched the event online and posted questions via Twitter. She invited participants in the room to attend the CSO Reception hosted by the Bank and the Fund directly following the session.