Sedentary lives, the other global epidemic 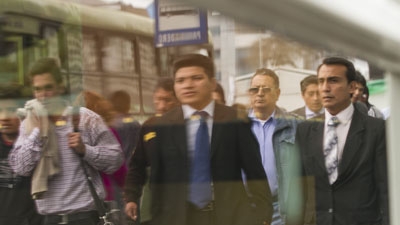 A man leaves home to go to work. When he reaches the bus stop, he discovers that it has been relocated two blocks further away. In his office building, he learns that the elevators only stop on every fourth floor. Later, when he goes shopping, he finds that the store has turned off all the escalators.

This individual will probably be annoyed that he has to do with his two feet what technology previously did. Additionally, these new arrangements mean that he has to spend more time to reach his work or to go shopping. But these changes could be saving his life.

Sedentary lifestyles kill some 5.3 million people every year, according to the WHO, and with the increase and aging of the population, these lifestyles will become increasingly common, especially in low- and middle-income countries. In Latin America, physical inactivity is responsible for approximately one of every 10 deaths.

Although in recent years, international headlines have been dominated by outbreaks of Ebola  and Chikungunya in different countries, an increasing number of people around the world are cultivating a lifestyle that poses a serious public health threat.

Lifestyles with little or no physical activity are the leading cause of obesity, and one of the main risk factors for diabetes, cardiovascular disease, arthrosis and colon and breast cancer. Together, these diseases account for 63% of all deaths annually. In Latin America, physical inactivity is one of the most common risk factors for chronic non-communicable diseases.

In addition to directly affecting citizens’ quality of life, inactivity exacts a heavy cost on the region’s health systems since it leads to an undesirable increase in medical appointments and populations at higher risk of suffering from non-communicable diseases. According to the experts, physical inactivity, which is widespread in our societies, originated with urbanization and the mass implementation of technology. From watching television on the couch to performing jobs that involve no physical activity, modern societies have developed unhealthy habits whose consequences have become increasingly worrisome.

A simple example will help illustrate the magnitude of the situation: the action of sweeping the floor in a house, for example, is the equivalent of walking some 30 blocks. With the appearance of smart vacuums, exercise disappears. In addition to using household technology, people travel in motorized vehicles, which have replaced the traditional – and healthier – practice of walking.

“The public space conditions citizens’ lifestyles,” explained World Bank health expert Luís Pérez. “Cities play a key role in promoting physical exercise: they can create footpaths and wide sidewalks or promote the use of public spaces such as parks. However, all of these initiatives are dependent on making spaces that are believed to be safe and well-lit,” says Pérez.

After all, exercising is a personal choice. Often, citizens prefer to live next to public transport stations than to walk for a few minutes. That is just one example of how the comfort of modern technology and the aversion to wasting time are directly affecting the health of the population. In response, authorities should act to help make life in cities more physical.

According to Pérez, there are simple measures that can mitigate the effects of a sedentary lifestyle and create healthier societies. For example, establishing bus stops every four blocks instead of two would encourage people to walk more and therefore achieve the minimum for weekly physical exercise, which is estimated at 30 minutes, three times per week.  Likewise, public transport stations should be placed further away (two or three blocks) from commercial centers in cities.

Another practical measure that may be beneficial is to restrict the use of elevators or reduce the number of escalators in large commercial establishments. The idea is to implement public measures that incorporate exercise into citizens’ daily lives.

Avoiding the ills of a sedentary lifestyle

In the private sphere, experts recommend a series of measures to avoid becoming sedentary and being exposed to associated diseases. These include at least 30 minutes of exercise, whether it is brisk walking, going up and down stairs, dancing, biking, swimming, walking instead of driving, doing domestic chores and gardening, washing the car and practicing sports. According to the ILO, people who engage in little physical activity run a 20% or 30% greater risk of dying from any cause.

Experts recommend that this activity should be gradual, two or three times per week, and should be increased over time.