Saving Lives by Providing Medical Insurance for the Poor

Single mother Bharthi had to sell her home and gold jewelry to pay for surgery to remove her daughter’s brain tumor. That was before the Karnataka government rolled out its new medical insurance programme for the poor. Now, little Sony receives free radiation treatment and chemotherapy and is looking forward to getting better.

20 year old Eshwar stopped going to school five years ago when he developed severe headaches and breathing problems.  When nothing made him feel better, his family took him to the government hospital in a nearby Karnataka town where the doctors advised a heart valve replacement.

Shaken by the diagnosis, Eshwar’s parents didn’t know what to do.  They came from a poor rural family and would never be able to afford the expensive surgery needed to save their young son’s life.

Luckily, the Karnataka government’s new medical insurance program for the poorest had just got underway. The program – known as the Vajpayee Arogyashree Scheme (VAS) – provided free tertiary medical care to families living below the poverty line for a range of complex illnesses, mostly cardiac, oncologic, neurologic, burn, and trauma care, which are often expensive to treat.

A VAS counsellor took the family to a medical camp organized by the main government hospital in Dharwad town. The program requires empaneled hospitals to organize health camps where poor rural patients who need tertiary care are identified. After a series of medical tests, Eshwar was sent to a Bangalore hospital for specialized surgery.

Today the young man from Nuluvi village is recovering well. He has just cleared his last health check and plans to return to school soon.  Much to the family’s relief, the VAS program has paid the full cost of the surgery – a whopping Rs. 120,000 - directly to the hospital, sparing a catastrophic financial burden on the family.  Without the insurance, the family would have been pushed deep into debt, trapping them in an endless cycle of poverty. Or else, the boy would have remained untreated.

After the storm, a rainbow

The program has come none too soon for little Sony Inalli and her mother Bharthi, a single parent who has raised two young children alone after her husband deserted them many years ago.

About 8 months ago, ten year old Sony developed a tumor in her brain and had to drop out of school altogether.  Bharthi, who earns a meagre living as a flower seller, took her young daughter to a private hospital where they were advised immediate surgery.

The surgery cost a princely sum of Rs. 110,000, and Bharthi was left with no option but to sell her modest home and all her gold jewelry to pay the private doctor. However, the operation was a partial success and had to be followed up by two other surgeries to remove the tumor completely. The small family was now at breaking point, their finances completely exhausted.

That was when Bharthi learnt about the state government’s VAS medical insurance program.  Now, Sony receives free radiation treatment and chemotherapy.  “Without this support, my daughter would have been left to die,” said an emotional Bharthi, looking fondly at her smiling child.   Sony is now able to accompany her mother to the flower market every morning and is looking forward to getting better.

A recent World Bank impact evaluation has found that the VAS program has led to important health benefits among the people living below the poverty line in the northern districts of Karnataka where it was first implemented. Mortality due to conditions covered by the program was 64% lower in program areas compared with similar communities that were not covered. And, out-of-pocket health spending by beneficiaries was reduced substantially.

The World Bank-financed Karnataka Health Systems Development and Reform Project has supported the development of the VAS program since 2010 through an allocation of  Rs. 162 crores (US$ 27 million) while the World Bank’s Health Results Innovation Trust Fund has financed the impact evaluation.

“As India develops its strategy to achieve universal health coverage, this program shows how ensuring free care for the poorest can both improve health and protect families  from crippling health costs,” said Patrick Mullen, the Bank’s project leader. 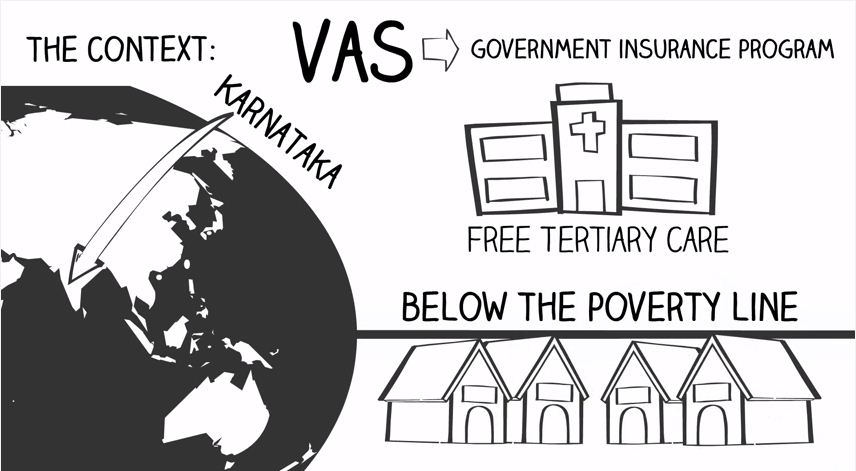