China's double-digit economic development has spurred massive consumption of total primary energy and electricity. The country’s primary energy demand is expected to grow by 2 percent annually over the next 20 years, and coal will continue to dominate its energy mix accounting for more than 50 percent of primary energy up to 2035.

Energy efficiency and renewable energy are two critical elements of sustainable urban development strategy and are central in China's push to reduce the carbon footprint of its economy. As part of the efforts, the government plans to increase the installation of rooftop solar PV systems from under 1 GW in 2010 to 3 GW by 2015.

As the nation's capital and a pilot city for low-carbon growth, Beijing, with a metropolitan population of about 20 million, is striving to become a model for other Chinese cities in promoting resource-efficient and environmentally-friendly urban economic growth.

With support from the World Bank, Beijing is implementing a large project to install 100 megawatts of rooftop solar PV systems in 800 primary and middle schools - the largest of such initiatives in the country so far.

The “Sunshine Schools” program is designed to achieve multiple benefits: generating clean energy for schools to meet their electricity needs, providing bluer skies and healthier air for Beijing residents, serving as a tool for raising green awareness among young students, and contributing to the country’s efforts to expand use of renewable energy and to address climate change.

Harnessing the sun for energy

The Middle School attached to Northern Jiaotong University in Beijing is one of the 800 schools that have benefited from the project.

“Solar PV systems were mounted on the rooftop of many of our school buildings. Now we are using it for campus outdoor lighting, air-conditioning, winter heating, lightings in school buildings, garage and many other things,” said Jiang Hua, a teacher at the school.

Under the program, schools are reaping financial benefits. They can use electricity generated by the solar PV system free of charge in the first six months as well as after the 15-year project period, and can even generate some additional incomes through sale of the extra electricity to the power grid during school vacation days.

“There are many benefits. It reduces consumption of fossil fuels – coal and oil. This reduces air pollution and makes the skies bluer in Beijing. It saves a lot of money on our school’s electricity bill,” Jiang Hua added.

" Solar PV systems were mounted on the rooftop of many of our school buildings. Now we are using it for campus outdoor lighting, air-conditioning, winter heating, lightings in school buildings, garage and many other things. "

The impact of harnessing the sun's energy to help power the schools, however, reaches far beyond financial benefits. Having solar panels on school property sends a strong message to the children about the importance of moving towards sustainable energy and reducing our carbon footprint, stimulating their enthusiasm and making them champions for renewable energy and energy efficiency, which is seen as the biggest benefit of all.

Some schools have opened a course about solar energy. “Its main role is educational,” said Chen Suqin, Principal of Jinsong No.2 Primary School. “We have integrated it in our science course and use it to educate our students about the need to protect our environment and conserve resources.”

“Using solar power makes a big impact on the students, changing their behavior and their values. They have been inspired to take action in their daily life to protect the atmosphere – adopting green travel modes, switching off the light when leaving the classroom, and turning off the computer when not in use to save energy，” said Jiang Hua.

“Through this working example of solar power in our school, I have gained much knowledge. Replacement of nonrenewable energy with renewable energy can greatly reduce environmental pollution，” said Zhang Xinyi, a student at the Middle School attached to Northern Jiaotong University.

Science education activities have also been organized around the subject. At Beijing Jinsong No.2 Primary School, pupils in an after-school science group learned about solar and other renewable energy sources and discussed ways to save energy.

“Solar panels can be mounted on the rooftop of buildings to generate electricity. And we can save energy by, for example, fixing a fridge door seal, and soaking rice in water for 10 minutes before cooking,” said Li Yuhan, a member of the science group.  Children also passed on such knowledge to their families and friends.

The program has served to raise public awareness of renewable energy and inspire actions to help build a sustainable urban future for China. 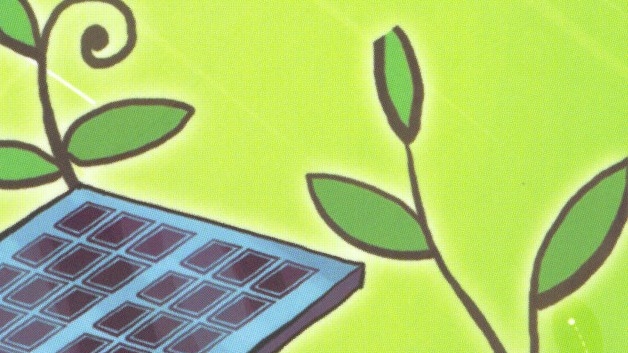