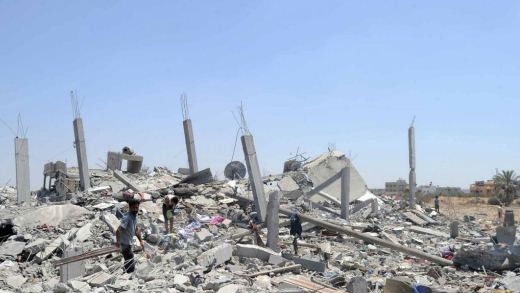 The ceasefire reached at the end of August 2014 in Gaza provided international organizations the breathing space they needed to draw-up plans for recovery and reconstruction.

The latest conflict has been more serious—in terms of human losses and physical destruction—than any of Gaza’s previous conflicts: according to UN figures, about 2,130 Palestinians have died, many of them women and children. Out of Gaza’s population of about 1.8 million, about 450,000 are said by the UN to be unable to access municipal water due to damaged infrastructure and low water pressure.

The Palestinian Authority (PA) is assessing the damage done to infrastructure in Gaza with the help of a number of international organizations including the World Bank, UN agencies, and the European Union.

In terms of municipal services such as water, sanitation, and electricity—sectors where the World Bank has experience and expertise in Gaza—the Bank has led the process of rapidly estimating how much the damage will cost to repair, and what sort of resources it will take to bring normality back. It is also preparing three projects to help restore services in these areas on emergency basis.

Gaza’s only power plant was severely damaged, bringing the plant’s operations to a halt. This has worsened power shortages that were already severe. The PA, for example, estimates that only 50 percent of wastewater is treated. Where sewage is treated, it is done poorly, leaving raw sewage discharging directly into the sea, raising concerns for health and the environment.

Faced with a challenging fiscal situation even before the crisis, the PA itself will not be able to cover the cost of recovery and reconstruction. Aid to it has fallen by nearly a third since its peak in 2008. A substantial fiscal adjustment has not kept pace with the reduction in external assistance. Even before the Gaza conflict, itwas facing a financing gap for which donors’ assistance is needed.

The war in Gaza will have considerably deepened this deficit. The Bank is preparing to help the PA with an emergency development policy grant cover to emergency expenditure for education, health and social protection..  An aid conference is planned in October.

The Gaza economy has been unsustainable for years due to recurrent conflict and an ongoing blockade of exports and imports. Its ability to rebound will depend on the cessation of hostilities and reconnecting the West Bank and Gaza economies. Allowing free movement of people and goods—and increasing aid flows to help essential public services and reconstruction—will also be key. Yet, real economic growth in the long term will not be sustainable without the creation of jobs through a more dynamic private sector. For this to happen, the removal of Israeli restrictions on access to markets and to natural resources remains a prerequisite for giving Gaza’s economy the chance to improve.