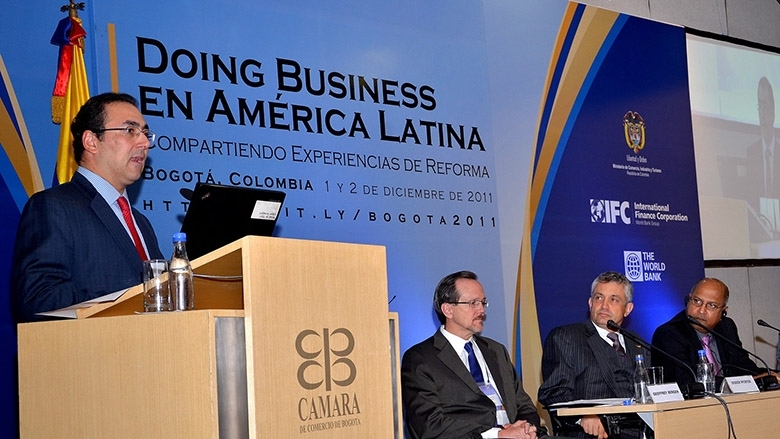 The World Bank and the International Finance Corporation (IFC), in cooperation with the Ministry of Commerce, Industry, and Tourism of Colombia, recently organized the conference Doing Business in Latin America: Sharing Experiences of Reform. During the two-day event, over 155 government officials and private sector representatives from 14 Latin American countries shared best practices on investment climate reform across the region.

The conference focused on the areas of starting a business, international trade, access to credit, and commercial dispute settlement. The conference also emphasized the role of technology and electronic tools to reduce red tape. Information technology plays a key role in increasing transparency in the region.

Participants took advantage of the event to discuss opportunities and challenges for investment climate reforms in Latin America and to establish a network for continuous exchange of ideas and regional progress updates. To create a knowledge base for reforms, participants discussed several case studies from regional champions.

Some countries in Latin America already have global good practices in certain areas—Panama in the area of trade logistics and Peru in property registration, for example.

Colombia has successfully implemented reforms to protect investors but constraints to entrepreneurship still create a level playing field for further reforms. "The conference is the first step in the new reform plan being implemented to advance the country's competitiveness agenda. We are working very hard to create a better business environment for small and medium-sized enterprises," said Sergio Diaz-Granados, Minister of Trade, Industry, and Tourism of Colombia. The country also aims to further advance its position in the World Bank Group's Doing Business report. It has already taken important steps in this direction and is currently ranked 47 out of 183 economies on the ease of doing business.

The delegation from Chile described how their country increased productivity by creating better conditions for opening a firm. The implementation of the Process Facilitation Law improved the business start-up process and led to a 25 percent drop in the cost to register a company and a jump of 35 positions in the Doing Business 'Starting a Business' ranking—from 62 in the 2011 report to 27 in the 2012 report. It also led to a 35 percent increase in the number of registered firms.

Uruguay showed how it successfully designed a model for a one-stop shop resulting in a significant reduction in the time and cost to register a firm. According to the Doing Business 2012 report, it now takes 7 days and 5 steps to open a business in Uruguay—in 2011 it took 65 days and 11 steps. The cost to start a firm decreased from 42.1 percent of Gross National Income per capita to 24.9 percent. Uruguay is now ranked 32 out of 183 economies on the ease of starting a business—an improvement of 107 ranks toward the previous year.

Peru highlighted how the implementation of a specialized commercial court led to a reduction in the time to process court cases by up to 75 percent and to increased transparency because court judgments are now published on a website.

More than 10 bilateral technical assistance efforts and regional integration initiatives are now planned coming out of these discussions displaying the need for investment climate reforms across Latin America. Among others, innovation, inclusion of public and private stakeholders in the reform process as well as the creation of communications campaigns were identified as important tools for successful regional private sector development programs.

"The World Bank and IFC will continue to support reform programs in various areas in Latin America—even beyond the ones measured by the Doing Business report—to create the necessary conditions for business formalization and enhance the competitiveness of the region," said Mary Porter Peschka, Regional Head Advisory Services for the Latin America and the Caribbean region for the International Finance Corporation, a member of the World Bank Group.