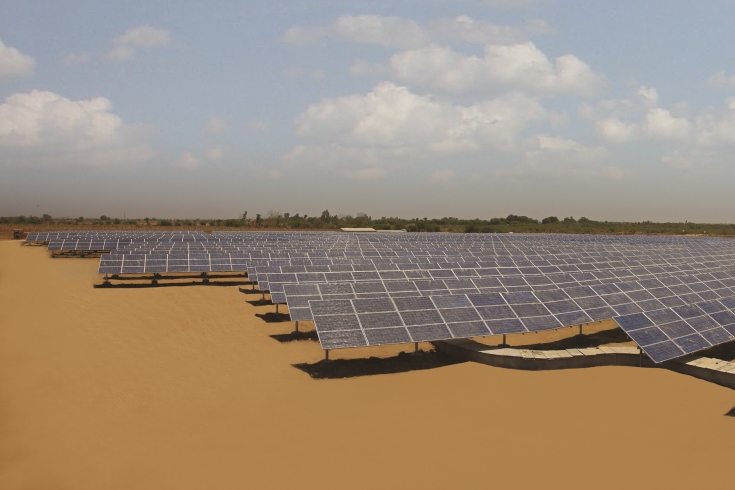 In the short span of three years, India has made impressive strides in developing its abundant solar power potential. It has added capacity at a commendable pace, and successfully reduced the costs of solar energy to around $0.12 per kWh for solar photo voltaic (PV) and $0.21 per kWh for Concentrated Solar Power (CSP), making India amongst the lowest cost destinations for grid-connected solar power in the world.

Growth in the energy sector is key for India as more than 300 million of the country’s people still lack access to electricity, and industry cites energy shortages as a critical barrier to growth. The development of solar power will help India produce clean energy and contribute to reducing emissions per unit of GDP by 20-25% by 2020, over 2005 levels.

Development of solar power in India

India’s concerted efforts to develop solar power began in January 2010, when the country launched the Jawaharlal Nehru National Solar Mission (JNNSM) as one of the eight missions under the country’s National Action Plan for Climate Change. The Mission’s aim was to deploy solar power on a large scale and position India as a major world power in solar manufacturing as well as research and development.

The first phase of JNNSM (2010-13) witnessed enthusiastic participation from Indian and international investors in the grid-connected segment. The strategy adopted the innovative mechanism of bundling relatively expensive solar power with power from the unallocated quota of the Government of India’s thermal power stations, which is relatively cheaper. It also followed a reverse bidding mechanism that enabled qualified bidders to benefit from declining global prices for solar components, thereby reducing the purchase price of both solar PV and CSP for the utilities.

Since planning for JNNSM Phase II (2013-17) will commence soon, it is important that it be based on sound analysis of lessons learnt from the first phase. The Government of India (Ministry of New and Renewable Energy) therefore commissioned a study in 2012 to identify the key challenges that could impede the expansion of the program. The report, Paving the Way for a Transformational Future: Lessons from JNNSM Phase1: Lessons from Jawaharlal Nehru National Solar Mission Phase I (pdf), supported by the World Bank's Energy Sector Management Assistance Program (ESMAP), is based on consultations with key stakeholders and identifies the following issues as requiring closer attention:

Under Phase I of the program, scheduled commercial banks mostly shied away from lending for solar projects while export credit agencies, multilateral financial institutions, and some nonbanking financial institutions took up most of the financing. However, given that most infrastructure lending in India has been led by commercial banks, the solar program too will need their active participation to scale up to the levels envisaged.

The provision of publicly developed infrastructure frees private providers to focus on solar power development, increases efficiency, and lowers costs.   Gujarat, for example, was the first state to declare a solar policy (2009) and today, is at the forefront of solar power generation in India. Its first solar park, developed on waste land in Charanka (Patan district), has the largest solar capacity in Asia. The park provides developers with already developed land along with critical infrastructure, including facilities for power evacuation and transmission, roads and water, thereby ensuring the rapid development of solar projects.

3. Use India’s comparative advantage to develop a niche in the manufacturing value chain

India’s solar PV manufacturing capacity is limited and does not straddle the higher technological echelons of the industry. This is because India’s manufacturers lack the raw materials, do not have access to low-cost financing, and face underdeveloped supply chains. In CSP, where local manufacturing is more complex, India has not been able to manufacture some critical components. Either technology suppliers are limited and their products patented or the lack of natural resources poses an impediment. India should therefore seek to define and develop its manufacturing capabilities in specific parts of the value chain where it enjoys a comparative advantage and can emerge as a globally competitive producer. An earlier ESMAP-World Bank study, Development of Local Supply Chain: A Critical Link for Concentrated Solar Power in India has identified the potential for reducing the costs of CSP components in India through local domestic manufacturing.

The World Bank has identified the development of solar power as one of the key elements of its Country Partnership Strategy with India. Accordingly, it will continue to strategically engage with the Government of India to scale up solar power in India, specifically in the lagging states. The findings from the study will be disseminated to the central and state governments as well as to market actors to ensure a shared understanding of the issues and analysis presented.