On December 6, the Ecuadorean capital celebrates the 479th anniversary of its founding. This year, the city has even more reason to celebrate since construction is advancing on what will be one of the largest urban transport works in Latin America: the Quito Metro.

The topography of the city, which is located in a valley surrounded by volcanoes, impedes it from having wide roads. Consequently, traffic jams in the old Colonial part of the city can be a nightmare. How can traffic congestion be eased while maintaining that charming old part of the city?

For the first time, four multilateral agencies- the World Bank, the IDB, CAF and the European Investment Bank— together with the national and municipal governments, have joined forces to finance the construction of the first line of the Quito Metro, which will require an investment of US$ 1.5 billion.

"We are very proud to be able to contribute to the Quito Metro Project. While the project is technically impressive, the most important thing is that it will transform and change the lives of all Quito residents, promoting inclusion, greater opportunities and a better quality of life,” said Hasan Tuluy, World Bank vice-president for Latin America and the Caribbean.

Tuluy also expressed his satisfaction because “for the first time in the history of the World Bank, it is working with the European Investment Bank, IDB and CAF under the leadership of the Municipal team that is implementing the project. This will be an example for other cities and countries that could benefit from this experience.”

With its 23 kilometers and 15 stations – six of them integrated with the Metrobus-Q network, the first metro line will have the capacity to transport some 360,000 passengers daily.

"We are building a more modern transport system…. We will make the best metro system in the Americas in Quito. The metro will save US$ 14 million in fuel annually, will directly generate 1,800 jobs, will link the north and south of the city and will invigorate the economy.  It is a mechanism of social equality. We want to take a leap forward with infrastructure that will last until the next century,” said Augusto Barrera, mayor of the Metropolitan Municipality of Quito.

" I think it’s a very important public work for the country’s development. Quito is an extremely congested city, so it’s essential. It is a hugely significant work for transportation in Ecuador. "

The Quito metro will enable inhabitants to travel between the north and south of the city in approximately one half hour. It will set new standards for transport in the Ecuadorean capital, which currently has a high and growing demand for efficient public transport.

“I think it’s a very important public work for the country’s development. Quito is an extremely congested city, so it’s essential. It is a hugely significant work for transportation in Ecuador,” said young Quito resident Diego Quishpe.

The planned route – all of it underground – will connect the main tourist attractions of the city and will cross the principal roads and tourist destinations in Quito. The route is located near the places of employment of nearly 760,000 workers.

According to studies conducted by technicians of the Community of Madrid – which is advising the project – nine of every 10 Quito residents will have the possibility of accessing the integrated metro system within four blocks of their home or workplace.

This is good news to Elena Pachacama. It currently takes her one and a half hours to travel from Los Dos Puentes in the south to the north of the city. “With this project, it will take 30 minutes, saving me a lot of time to do some errands in the north or at work.”

Besides resolving one of the city’s critical problems – traffic – and improving connectivity, it will help to reduce emissions of greenhouse gases and other contaminants.

"The transport (sector) is finally forging ahead with the construction of a truly public transport system, the Quito Metro, which will be the most modern in Latin America as well as the backbone of that integrated system,” said Ecuadorean President,” said Rafael Correa.

He added that the Quito Metro is the city’s most important project of the past 100 years, ever since the construction of the Eloy Alfaro railway. “Its benefits go beyond the city; it benefits the country. It is a historic and strategic project for the country.” 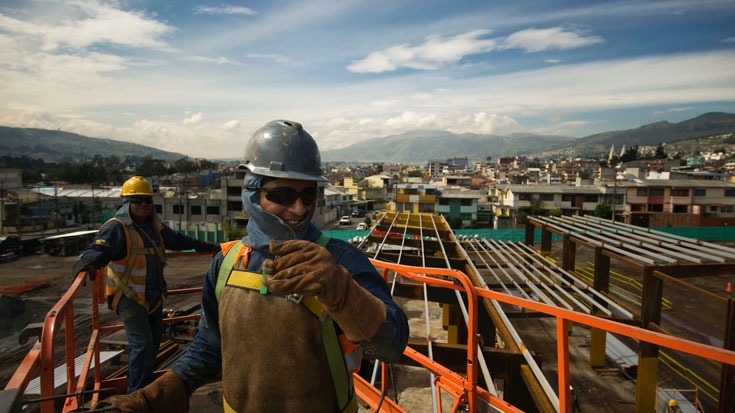