A Bridge to Prosperity 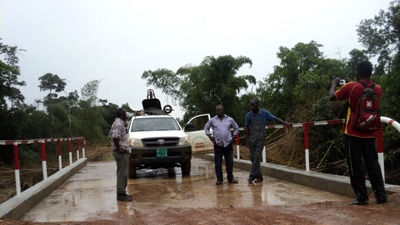 KINDZOUMBA, November 26, 2013 – A mere 28 kilometers separates the communities of Kindzoumba (Tsiaki district) and Kibamba (Kingoué district), both about 280 kilometers southwest of Brazzaville. However, these two small towns in the country’s agricultural heartland, the Bouenza Department, could no longer get their produce to Mouyondzi, the region’s urban community. The road had become impassable for motor vehicles after the bridge it once crossed had collapsed. The merchants whose trucks formerly transported crops to market in Mouyondzi gave up on the route.

For almost 15 years, farmers in the villages along the road were forced to travel this distance on foot, toting their bananas, cassava, or citrus fruit on their heads (or in baskets on their backs) to the Mouyondzi market. The arduous process finally dampened the residents’ desire to work.

" This project is really about overall rural development because the roads you build aren’t just for for agricultural purposes—they can also be used to evacuate the sick, to go to school, or even to facilitate trade between cities "

The Agricultural Development and Rural Roads Rehabilitation Project (ADRRP), implemented in 2008 by the World Bank and the Congolese government, has now restored the region’s prosperity. “The repair of this road is a great relief to the people of Tsiaki and Kingoué, because it lets us move our crops faster. It allows us to increase our production, which went down because of the transportation problem, since it was so hard to get to Mouyondzi, the biggest market center in the region,” says Benoît Mabiala, a resident of Tsiaki district.

The bridge over the Louloulou River, which restored motorized traffic along the road, is a huge shot in the arm for the local economy. Production of bananas, yams, cassava, peanuts, beans, and all sorts of fruit is booming in the region.

Long known as the Congo’s breadbasket, Bouenza Department in the south has the richest soil in the country. Mouyondzi, the main district, plays a special role. Merchants based there gather agricultural produce from the entire region to send to the rest of the country via the Congo-Ocean railway linking Brazzaville, the capital, to Pointe Noire, the port overlooking the Atlantic Ocean.

Sylvie Dossou, World Bank country manager for the Congo, says the benefits of the ADRRP go beyond the agricultural sector. “This project is really about overall rural development,” she notes, “because the roads you build aren’t just for for agricultural purposes—they can also be used to evacuate the sick, to go to school, or even to facilitate trade between cities.”

Co-financed in equal part by the World Bank Group’s International Development Association (IDA) and the Republic of Congo, the Agricultural Development and Rural Roads Rehabilitation Project is backed by CFAF 20 billion (US$40 million). Its goal is to boost the productivity of farmers and livestock producers, increasing agro-livestock production and elevating by 10 percent or more the income of beneficiary households. It also seeks to provide access to improved agricultural technologies, develop market infrastructures, and establish agricultural policies and expenditure programs focused on the poorest population groups, thereby reducing poverty and alleviating youth unemployment. The project is being implemented in 10 departments in the Congo with high agricultural potential. Since its launch, the project has, among other things, funded 841 microprojects and has helped prioritize the rehabilitation of 1,084 kilometers of rural roads in several Congo departments. It has also provided robust seeds and cassava cuttings to farmers.

The initial closing date of the project was June 30, 2013. However, in light of its positive effects, the Congolese government has sought additional financing to continue it. Project Manager Amadou Oumar Bar reports that, “tThe World Bank will provide the Congo with US$10 million more to continue the ADRRP.”