Lower costs of mobile services and increasing coverage have made life much better for farmers and fishermen working in the remote islands of Vanuatu, enabling them to deliver the right amount of goods at the right time.

Port Vila, Vanuatu – While the so-called ‘telecommunications revolution’ may be relatively old news for much of the world, in the Pacific region, the revolution has taken a little longer to arrive. But that’s not for lack of want.

This is the most dispersed region on the planet, and many Pacific countries have been hamstrung by long-stagnating telecoms monopolies that have resulted in continued high prices and poor coverage outside major urban centers.

The Republic of Vanuatu is a textbook example of where, with the World Bank’s support, Pacific nations are seeing the massive benefits of competition. Costs have come down and access has skyrocketed; in 2007, 11 percent of the country had a mobile phone subscription. Just five years later, that figure is 64 percent. Coverage now reaches over 90 percent of the country.

Some of the most cut-off communities in the remote north are now connected, and after years of having to travel hours simply to make a phone call, they are now talking and texting their wantoks (those close to their heart).

Farmers and fishermen can deliver goods at the right time

The island of Malekula produces what many consider the best cocoa in the Pacific. In 2007, a group of farmers formed the Cocoa Growers Association of Malekula, a not-for-profit collective that manages the packaging, distribution and export of cocoa from more than 400 Malekula-based farmers.

“It is a long journey, and expensive for those with only a small income,” according to Manager Basile Malily.

Many would take the risk and also bring their crop – produced over many long months of hard work – in hope of a sale, only to arrive and find the Association already had an oversupply.

“With cell phones, farmers can be in the field and they can just call  and ask, ‘Is it a good day for me to bring my cocoa?’” said Malily.

For Charles Wesley, a soft-spoken fisherman who is out on the water between 6am and 4pm each day, having a mobile phone, and being able to make a call from out on the water, has changed his working life.

He says that for many years, before he was able to afford a phone, selling his day’s catch was a frustrating process.

“It was hard. When I had caught some fish, I would return to town, carry them to the main road to find a truck and then I’d get the truck to drop me off in front of the hotels to see if they wanted to buy any.”

He says that his phone, which he purchased soon after telecommunications provider Digicel arrived in Vanuatu in 2008, is now part of his working life.

“When I’m out and I catch some fish, I can just call the hotels to see if they need them,” Charles explained. “They can book them so that when I come ashore, they can meet me and I can look after their order. I just ask them ‘How many kilos do you need?’”.

" When I’m out and I catch some fish, I can just call the hotels to see if they need them. "

Certainty of salaries for government workers

For government workers in Vanuatu, the most frustrating day of the week has traditionally been every second Friday, which is Pay Day for the country’s civil servants. With  government payment systems often unreliable, the prospect of not getting paid for days – even weeks – has, in the past, been the source of enormous frustration for many.

And for thousands of government employees – the teachers, doctors, nurses and officials that live and work in this 83-island nation spread across more than 12,000-square kilometers – that frustration would be compounded by having to make a difficult decision: pay the fee for the journey to the nearest bank (often hours away and on neighboring islands), or wait a few more days to give payments the extra time to be made.

“I would need to take a long truck journey to go to the bank,” explained Helen Lingtamat, a secretary at the Malekula office of the Vanuatu Public Solicitor’s Office. “Without a mobile, we had to take transport to go to the bank, just to check our accounts.”

When prices of mobile phones came down, Helen bought one and is now an avid user of the National Bank of Vanuatu (NBV)’s recently introduced isiMS system, which provides simple SMS-based account balance updates.

With the support of the World Bank and other partners, including the Governments of Australia and New Zealand, Vanuatu is one of several countries in the Pacific region that has benefitted from the recent telecommunications revolution, which has helped give over 2 million more people access to mobile phones in a short space of time.

This is helping Pacific islanders access services, reach families and do business, in distinctly Pacific ways. 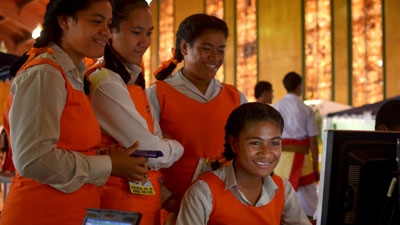 Connecting the Pacific through ICT