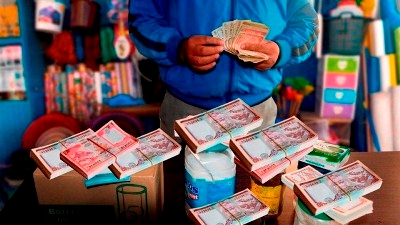 Economic growth in Nepal dipped to 3.6% in FY13, with average inflation just under the double-digit mark, according to the Nepal Development Update October 2013.

This weak performance was essentially due to historically low levels of activity in both the agriculture and industrial sectors, which grew respectively at only 1.3% and 1.6% in FY13. By contrast, services growth reached 6%, fueled by increased consumer spending and growing financial intermediation.

Overall inflation rose in FY13 to reach 9.9%. The disappointing harvest in FY13 triggered a surge in imports of food items and an upswing in food prices. Non-food prices also increased by 10% in FY13, compared to 9% in FY12, affected by higher prices of petroleum products, and the onset of the rupee’s depreciation.

Nepal’s trade balance continued to deteriorate in FY13, with adverse developments in both exports and imports. Export growth decelerated to a mere 3.6%, while imports growth rose to 20.6% driven mainly by increased demand for fuel, and increased domestic demand driven by remittance inflows.

Workers’ remittances grew by 20.9% in FY13. As a result, officially recorded private transfers amounted to over 25.5% of GDP. While contributing to Nepal’s staggering import growth, private transfers are also a lifeline allowing Nepal to finance its trade deficit and maintain current account balance.

Nepal experienced a (real) fiscal contraction in FY13. Significant delays in budget approval depressed public spending, which declined in real terms. As a result, public expenditure as a share of GDP declined to 18.8% in FY13. In contrast to expenditures, total revenue continued to rise sharply owing to both higher imports and greater tax efficiency.

Overall, Nepal’s political developments continue to overshadow and impede its economic develop­ment. With elections for a new Constituent Assembly expected in November, political un­certainty continued to hamper growth-oriented fis­cal policies and have prompted the private sector to adopt a wait-and-see position regarding future in­vestment.

The dip in economic growth in 2013, fuelled by political uncertainty, was to some extent, only an amplification of deeply-rooted pre-existing structural problems. Moreover, new sources of vulnerability have surfaced: the depreciation of the Indian rupee, to which the Nepali currency is pegged. Managing the fallout of the rupee’s depreciation will require policy makers closely to monitor macroeconomic developments and to deepen their efforts to consolidate financial sector reforms.

In 2014, a return-to-normal scenario is expected, with economic growth projected to recover from the FY13 dip to reach 4.0-4.5% in FY14. The main sources of weakness are related to the fate of the rupee and the outcome of elections. Despite the improvement in non-performing loans over the past two years, the recent fall in the rupee has led to concern over corporate indebtedness and the impact on the banking sector. Moreover the outcome of the elections, particularly whether it is perceived as broadly legitimate and representative, will affect investor sentiment.

The falling value of the rupee caused some alarm in the public and triggered calls from experts to rethink the country’s exchange rate policy. But even though it is significant, the fall of the rupee is unlikely to translate into full blown crisis.

The weakening rupee will have an impact on the government’s fiscal position and add inflationary pressures.

But there are pros to the currency peg especially given the significant integration of the Nepali and Indian economies. And while the Nepali currency’s fate is tied to India’s, unlike its southern neighbor, the country has important additional buffers to mitigate the macro and micro impacts of the currency shock. This includes remittance inflows from the Nepali diaspora constituting a robust “countercyclical” buffer.