Today the UN observes the International Day of Rural Women. Women contribute to the rural economies in many ways from small village self-help groups to leadership roles in decision making processes at different levels. The World Bank believes that supporting women to actively participate in the rural economy is smart economics.

Following the end of the conflict, the Bank has initiated a number of special projects to assist the Sri Lankan government in its ambitious resettlement and reintegration efforts aimed at those displaced during the conflict. The Community Livelihoods in Conflict Affected Areas Project, popularly known by its previous name Re-awakening Project (RaP), in the northern and eastern regions and their adjoining areas of the country (see map), has a special focus on gender and development activities. This project started during the conflict in 2004.

The program has taken a bottom-up approach in supporting, planning and implementing activities by engaging young men and women as Community Resource Persons (CRP). They are instrumental in organizing their fellow community members for small scale community infrastructure development activities. There are approximately 806 CRPs working in the project area, and among them 98% are young women.

RaP also includes a special program called FEEP (Family Economy Enhancement Package) that aims to assist nearly 6,000 war widows in the eight districts of the Northern and Eastern provinces and four districts in the adjoin provinces. The program is flexible and allows women to select an income activity that suits the village life pattern with least disturbance to their day-to-day chores. The total cost of the package can vary according to the needs of the communities in different areas and to the demand in a particular area.

To date, 1360 women have benefitted from the intervention. Few specific instances below are illustrative of how the project delivers impact:

Indrani is 50 years old, was born in Jaffna, and lives at Uppukulam-South in Mannar. Her husband was disabled in the war and is not able to work. Due to their financial constraints, they were unable to send their three children to school. In 2009, she received loans from the VDO and cooperative bank to build and expand a “buy back systems” business with five other poultry farmers in the area. She has since doubled her business and is now planning to employ three other women to expand further.

Though such cases are inspiring instances of positive change, there is more to be done to integrate war-affected women into the mainstream society. The RaP approach in gender mainstreaming clearly shows the critical role women must play in rebuilding war-damaged, local community structures. 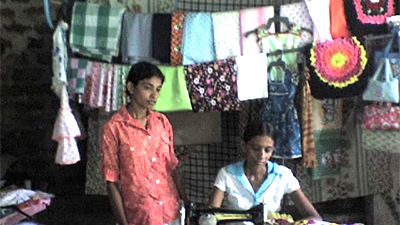 Kusuma is a 45-year-old widow living with her children in a border village called Pandukabayapura in the Anuradhapura district. There she runs a textile shop with her daughter. She joined the VDO and became a member of a small group with the hope of starting an income activity of her own. From the VDO, she obtained a loan of Rs. 20,000 to buy a sewing machine so that she and her daughter could make dresses for people in the village. Her daughter also received additional funds under the Skill Development’ Program of the Project, which helped her to study a course in dress-making, held outside of the village. At present, both mother and daughter earn sufficient income to not only manage daily expenses, but also to save for the future.