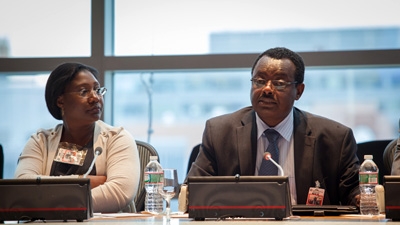 WASHINGTON, October 13, 2013—How can Africa boost agricultural productivity and increase public investments in a sector that employs as much as 70% of the continent’s population? That was the question put to Agriculture and Finance Ministers from Sub-Saharan Africa during two side events timed to coincide with this year’s World Bank-IMF Annual Meetings.

“In Africa, even more so than in other regions in the world, agriculture growth is hugely important for any effort to end poverty and promote shared prosperity,” Makhtar Diop, World Bank Vice President for Africa, told the Ministers. “Economic activity in agriculture typically accounts for 30 to 40% of GDP, and there is global evidence showing that productivity improvements in agriculture can have a poverty impact close to three times that of other sectors of society.”

At the first meeting on October 9, participants discussed “Sustaining the Comprehensive Africa Agricultural Development Programme (CAADP) Momentum.” Launched by African leaders in 2003, CAADP seeks to encourage governments to increase investments into the agricultural sector and allocate 10% of their public expenditures to the agriculture sector. The World Bank, the African Union Commission (AUC) and the New Partnership for Africa's Development (NEPAD) hosted the meeting.

“Since 2003, CAADP has demonstrated that African institutions can come together to address the critical challenges facing the continent. Already, Burkina Faso, Ethiopia, Ghana, Guinea, Malawi, Mali, Niger and Senegal have met or exceeded CAADP’s 10% target,” said Sari Söderström Feyzioğlu, Senior Manager for Sustainable Development in the Africa Region. “On our side it has been a win-win opportunity as well. CAADP has helped to align the Bank’s strategic focus and strengthen its strategic partnerships for optimal development impact.”

Since 2003, 32 countries have created national agriculture investment plans that lay out priorities for meeting the CAADP goals. On average, public agriculture expenditures have risen by over 7% per year across Africa (more than 12% per year in low income countries) and have more than doubled since CAADP’s launch, signaling greater recognition of the agricultural sector as an engine of growth and poverty reduction.

Abebe Haile Gabriel, the African Union Director for Rural Economy and Agriculture, noted that the Commission had designated 2014 as AU’s Year of Agriculture and Food Security. In the same year the AU will launch its new plan for CAADP called “Sustaining the CAADP Momentum.”

Gabriel also announced that new funding for CAADP – a second Multi-Donor Trust Fund (MDTF) – managed by the World Bank, will be sought . The MDTF fund provides grants to African institutions and finances technical assistance to the CAADP process. In its next phase, CAADP will focus on implementation, Gabriel said. “We would like to use this opportunity to call on our partners to support the next phase of CAADP which is going to be very exciting,” he said.

“We are seeing the build up of institutions in countries throughout Africa, which has been made possible by the support from CAADP,” said Estherine Fotabong, Head of Programme Implementation and Coordination Director, NEPAD. “This has been a very positive program and we want to see a continuation of financing. It has made it possible for us to have programs in gender, climate change and the role of women in agriculture,” she said.

Riera-Figueras expressed strong support for the continuation of CAADP.

“I have seen the results of CAADP in improved health and other programs that are broader than agriculture. I think this program makes a major contribution to improving livelihoods,” he said.

At the African Ministerial Roundtable on October 10, ministers of finance, economy, planning, and agriculture discussed “Strengthening Agriculture Public Expenditures in Sub-Saharan Africa.” The Ministers discussed their progress in improving agriculture spending polices as well as steps that have been taken to improve the quality of funding allocation for agriculture.

“Agriculture has taken its designated place in the development policy discussions,” said Gabriel during the October 10 Roundtable. “Several countries, such as Burkina Faso and Ghana have made encouraging strides in increasing both public investments and productivity of agriculture.”

According to Humado, “Ghana is one of the countries that has benefited from the public expenditure review process, and we are using the findings to develop our budget and programs for 2014.”

At the same time, Ghana must improve the share of public investments into agriculture, Humado said. Stating a sentiment shared by several other ministers at the meeting, Humado added, “We need additional funding to meet our CAADP goals but where should that money come from? Our budget is tied up with competing issues such as education and health.”

Mahama Zoungrana, Minister of Agriculture and Food Security for Burkina Faso said his country also met the CAADP targets with a 14% investment in agriculture in 2012. “We had satisfactory increases in production also and increased family incomes,” Zoungrana said. “But how can we continue this growth with 3.2% per year population growth and other challenges such as climate change, which has reduced our agricultural production?”

“Improving agriculture budget allocations depends on addressing the weaknesses in our statistical abilities,” he said. “This weakness makes it difficult for us to figure out the allocation. This issue should be included in development policy discussions.”

World Bank Vice President for Africa Diop agreed with the ministers who said that improvements in data gathering and analysis would go a long way to improve the quality of agriculture allocations. “I am pushing this agenda,” he said.

Diop expressed support for AU’s declaration of 2014 as The African Union’s Year of Agriculture and Food Security, and its new plan for CAADP.

“We intend to work with you to make sure that these are not just words,” he said, “but that they are backed up with actions to help awaken the ‘Sleeping Giant’ of African agriculture.”