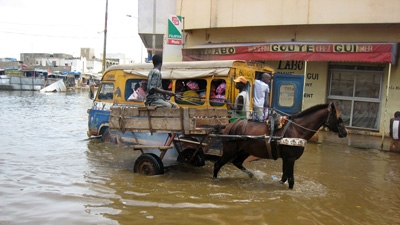 To help the victims of flooding, quarterly steps and budgetary allocations have been defined.

DAKAR, October 9, 2013—During a recent presidential council on economic and social policy monitoring, a meeting that brought together ministers, high-level public officials, as well as financial partners and civil society representatives, the Senegalese President, Macky Sall, shared his goal of elevating the country to being a model of governance, stating “Senegal must be the first Francophone African country to place results-based management at the core of all of its public policies.”

According to Vera Songwe, World Bank Country Director for Senegal, who attended this meeting, “the main objective of results-based management is to improve and streamline the use of public resources.” In other words, the goal is to meet the expectations of citizens, who want more effective and transparent management of public resources, she said. “It is a social contract between the Head of State, the Head of Government, and all citizens.”

Senegal is aiming to become an upper-middle-income country within the next decade, but has been plagued by weak growth since 2006. To move the country toward sustained and lasting growth, the newly elected government drafted an ambitious program.

" Senegal must be the first Francophone African country to place results-based management at the core of all of its public policies. "

The National Economic and Social Development Strategy (NESDS), developed in end-2012, aims precisely to reverse this negative trend by increasing the productivity of the entire Senegalese economy, in both the public and private sectors (sectors where performance is lower than the country's past performance as well as that of other African countries), and by improving citizens' living conditions.

Over the past months, Ms. Songwe and her team developed an innovative strategy to assist Senegalese authorities with designing a detailed matrix of the key outcomes defined in the NESDS and the World Bank Country Partnership Strategy (CPS) with Senegal for the 2013-2017 period.

In concrete terms, this matrix clearly defines the conditions to be met and the key steps required to achieve the outcomes targeted by the NESDS and the CPS. For example, to reduce the cost of electricity production from CFAF 94.31 in 2012 (among the highest prices in Africa) to
CFAF 63.15 in 2015, the quarterly objectives to be achieved and the budget allocated were identified. Similarly, with respect to combating the recurring flooding that has claimed numerous victims, the matrix defines quarterly steps and the necessary budgetary allocations to provide security for 7,000 persons in 2013 and 98,000 persons in 2017 under theStormwater Management and Climate Change Adaptation Project (PROGEP).

According to Vera Songwe, this approach is unique in more ways than one: it offers the opportunity for close collaboration between the World Bank and the ministries and implementing entities; the outcomes defined in the NESDS and CPS are linked to a budget or to specific resources, whether from the Senegalese Government, the World Bank, or both. “For each outcome targeted, the matrix clearly defines the objectives to be met and the activities to be carried out, based on a very precise timetable, which allows progress to be measured and ensures transparency,” she said.

This perspective is shared by Amacodou Diouf, chair of the National Civil Society Consortium (CONGAD), a civil society representative. “It is an excellent exercise that should allow us, on one hand, to take stock of our strengths and weaknesses and on the other hand, to see how to improve our performance with a view to best meeting the needs of citizens,” he stated.