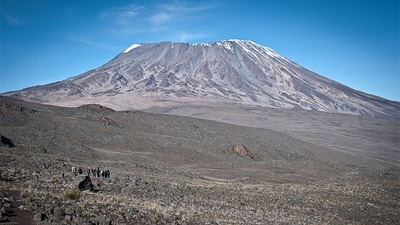 WASHINGTON, October 3, 2013 – The popularity of Mount Kilimanjaro as an international tourist destination generates an estimated US$50 million in revenue annually, but also has the potential for negative environmental impacts, according to a new report released today.

The report, Tourism in Africa: Harnessing Tourism for Growth and Improved Livelihoods, explores how tourism has been a key tool for economic development throughout the world, and how Sub-Saharan African countries can start or continue to utilize tourism as a source of growth and poverty alleviation. Written primarily for national and local policy makers, as well as potential investors, the report provides an illuminating analysis of the tourism industry, its economic value and potential.

Tanzania is home to a host of tourist attractions, including Ngorongoro Crater and the Great Migration of the Wildebeest across the Serengeti Plains. Mount Kilimanjaro, located near Moshi in the northern part of the country, has iconic status as the tallest mountain in Africa attracting thousands of visitors from across the world each year. The revenue from the park supports approximately 400 guides, 10,000 porters, 500 cooks, and contributes 13% of the country’s overall gross domestic product, according to the report. In addition, the report says that roughly US$13 million of the park’s revenue is used to help improve the lives of the poor around the mountain slopes; the area has the highest school enrollment rate (100%) and adult literacy rate (85%) in the country.

While Mount Kilimanjaro has been a successful at generating revenues for the park and for the locals, the report highlights some pertinent challenges which need to be addressed to continue to build on its success. These include the dangerous working conditions for porters and guides as well as the increased environmental degradation around the slopes, particularly with regard to the trail erosion during the wet periods.

Key lessons for Tanzania’s tourism from the report include: